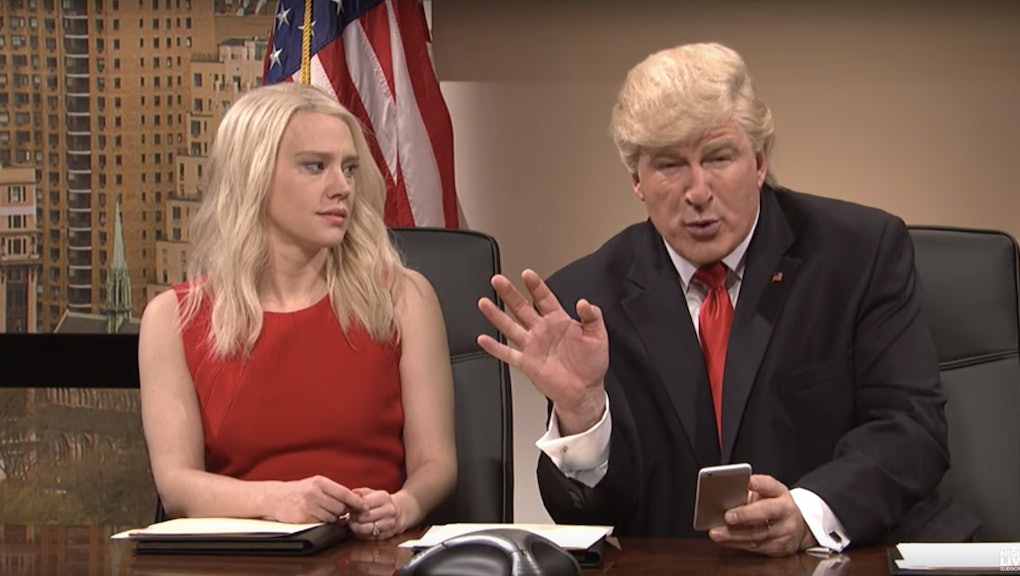 Donald Trump's Twitter use would maybe be comical if he weren't, you know, poised to assume the nation's highest office in mere weeks. So with its most recent cold open, Saturday Night Live was perhaps going for funny because it's true. Funny and frightening.

Reprising his role as the president-elect, Alec Baldwin sits in a security briefing, completely ignoring updates about Syria in favor of his Twitter account. Baldwin-as-Trump is enthusiastically retweeting the words of a teen named Seth. "He's 16, he's in high school and I really did retweet him," Baldwin says. "Seriously, this is real."

"He really did do this," Kate-McKinnon-as-Kellyanne-Conway adds, straight into the camera.

Indeed he did. Trump went on a full-scale Twitter tantrum on Monday, in which he returned to the voter-fraud well to explain why his opponent, Hillary Clinton, currently leads him by over 2.5 million ballots in the popular vote.  In his tirade, Trump zeroed in on CNN's senior Washington correspondent, Jeff Zeleny, for casting doubt on his baseless allegations of election fraud. To back himself up, Trump looked to a tweet from 16-year-old Seth Morton, borrowing and expanding upon the teen's words. (As Morton clarified in a follow-up tweet, he hadn't called Zeleny a bad reporter. That jab was pure Trump.)

Might the president-elect not have more pressing matters on his plate, tasks that deserve his focus more than engaging in a trolling war? Given that Trump has been "surprised by the scope" of the president's job, the answer to that question would pretty obviously appear to be an emphatic yes. McKinnon-as-Conway offered a strategic explanation for the president-elect's otherwise inexplicable Twitter activity.

"Okay, see, there is a reason, actually, that Donald tweets so much," she said. "He does it to distract the media from his business conflicts and all the very scary people in his cabinet."

Baldwin-as-Trump disagreed, though. He does it, he countered, because his "brain is bad." Comforting.

Per usual, the real Trump was not amused by SNL's parody. He took to Twitter — of course — to lament that, while he "tried watching" the sketch comedy show, he couldn't get through it. "Unwatchable!" he wrote. "The Baldwin impersonation just can't get any worse."