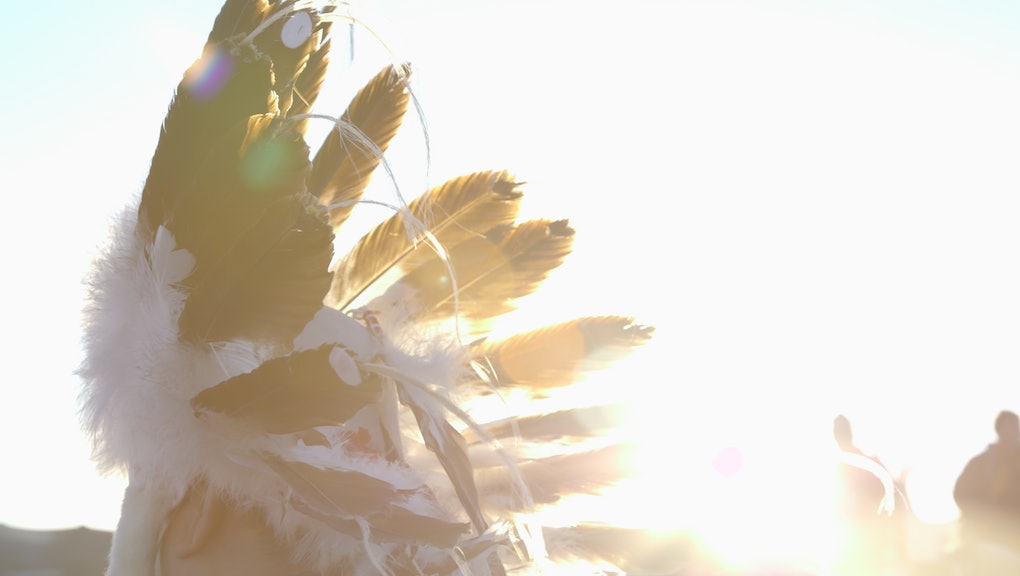 The victory at Standing Rock shows us all the way forward

CANNON BALL, N.D. — The indigenous people of the Standing Rock Sioux were the first to hear the news. At around 3:30 in the afternoon on Sunday, an elder approached the sacred fire and, taking a microphone, called the camp together.

He announced that the United States Army Corps of Engineers had rejected the permits needed to finish the Dakota Access pipeline project, which would have put an oil pipeline through treaty lands promised to the Sioux in the 1800s. The order effectively halts all construction going forward until further environmental reviews for alternative routes are conducted.

The indigenous people of the camp broke out into tribal victory dances. Welden Johnson, a member of the Colorado River Indian tribes, had traveled to Standing Rock to show solidarity with the Lakota Sioux people.

"There was strength in numbers," Johnson said as he celebrated by the fire. "It's been coming for a long time, and the people's voices have been heard. It's a good day."

Throughout the afternoon at Oceti Sakowin camp — the northernmost of the three camps at Standing Rock, and the closest to the front lines with police — tribal leaders and elders marched with banners high, singing prayers. At night, fireworks burst overhead, lighting teepees as the crowd cheered.

The victory at Standing Rock serves as a bright moment in what has been a dark year for civil rights movements and people of color across the world. Isolationist movements like Brexit, the election of Donald Trump and the resurgence of white nationalism in the U.S. have put the sovereignty and safety of refugees and indigenous people around the world in jeopardy. The Standing Rock resistance, for many progressives, represents a tangible victory at a time when protest has seemed ineffective.

"We don't often get these victories without bloodshed," said Richard Gonzalez, an indigenous veteran. "We demonstrated to the world that yes, there is a way."

Some of the indigenous here are skeptical, after centuries of abuse, that the federal government has suddenly come to their rescue. But even as the future of the Standing Rock struggle remains uncertain, the Lakota people have demonstrated, through resilience and unity, the way forward for resistance movements as racist, xenophobic and authoritarian power flexes its might.

The spirit of Standing Rock

Without camaraderie, selflessness and coalition building, the camps at Standing Rock wouldn't have been survivable. They are less "camps" than a small city, built on donations and volunteer labor. Over the months, hundreds of people blistered their palms constructing longhouses and yurts in time for the winter chill. They washed dishes in murky water, chopped wood and woke throughout the night to stoke wood stoves in meeting halls so that dozens of people could sleep without freezing.

The resistance at Standing Rock represents a coalition of unexpected allies. It's the first time in over a hundred years that the seven Sioux tribes have gathered together, and although the Sioux and the Crow Nation have had a centuries-old rivalry based on land wars, the Crow visited in November with gifts of buffalo meat.

It hasn't been just the indigenous in this fight. In the past week week, Oceti Sakowin camp expanded rapidly to accommodate a flood of non-native visitors and volunteers, growing by hundreds each day. On Saturday, 700 veterans arrived to take part in the protest and stand as human shields between water protectors and police, who have reportedly used tear gas, concussion grenades and water cannons to suppress the water protectors at the front lines.

The veterans set up ground over the weekend, building their own accommodations on the north side of camp and registering to serve at the medical tent. Over 2,000 veterans are still anticipated to arrive before Monday, the deadline for an evacuation notice put out by the governor of North Dakota.

The fight has just begun

But even now that victory has been declared, that tide could still turn. Already, visitors who came to stand in solidarity are packing it in to head home. But not everyone at Standing Rock is convinced that this is the end of the pipeline's path through treaty land. The Dakota Access pipeline company could continue to drill, choosing to incur fines by ignoring the Army Corp of Engineers. Some fear Trump, who at one point had a stake in the company building the pipeline, will reverse the decision when he takes office in January.

They have reason to be mistrustful of assurances from authorities. Over the past few months, law enforcement has released press releases claiming that roads would be closed, or that $1,000 fines were handed out for those bringing supplies into the area. It was never true, but the rumors spread.

"It's not over," Richard Gonzalez, an indigenous veteran, told Mic. "We need to celebrate the victory we do have, but we need to stay focused and continue our mission. The support is overwhelming, but we need even more."