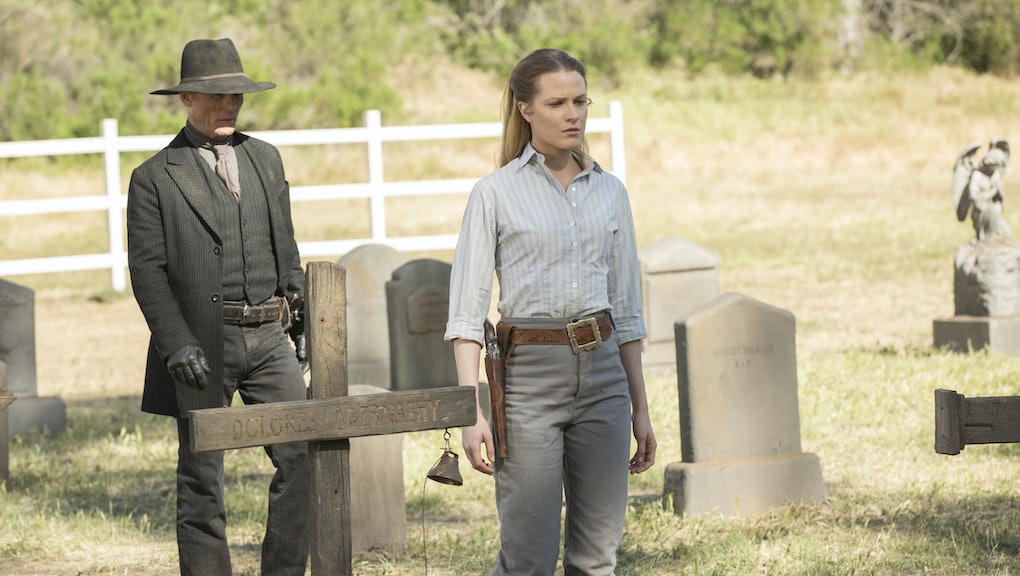 Over the course of nine episodes, Westworld has seen itself compared to HBO's biggest sci-fi hit, Game of Thrones, when in reality, the show has assumed a more Lost-like intrigue over its first season. The internet was certainly on board, developing several fan theories, many of which — for better or worse — panned out ahead of the finale. But there were still plenty of questions for the series to answer in its finale.

So how did it do? Here's the six biggest reveals from Westworld's momentous 90-minute finale.

(Editor's note: Spoilers for the Westworld season one finale ahead).

William finally wears the black hat. It was a foregone conclusion that William was actually the Man in Black during his first visit to the park, though the show did an excellent job once it made the actual reveal. As Dolores grapples with the Man in Black in the present, she tells him that he'll be in big trouble because William's going to rescue her (all these flashbacks haven't done her any good).

To the Man in Black's amusement, he retells William's journey to find Dolores after his brother-in-law, Logan, left her with a gruesome stab wound. Heading to the far reaches of Westworld in search for her, William eventually makes his way back to the park's center, Sweetwater, after ditching a naked Logan on horseback (no, really). In Sweetwater, he sees Dolores in the same narrative loop that he finds her at the start of his journey, picking up groceries and dropping a can of condensed milk. She stares at him, blankly; the memory of their brief romance wiped away completely.

It's a disturbing, yet cathartic moment for William, whose trip across the park has — by his own admission — revealed his true self. In the present, Dolores is shocked at what William's become, but his violent quest to learn about Westworld's game within the game, the mysterious maze, is ultimately a letdown from his perspective.

The maze is literal. Several characters in Westworld iterated to the Man in Black that the maze wasn't for him: It was for the Hosts. It's also a literal maze with an underlying message of consciousness.

The center of the maze is buried at a grave site next to the mysterious church steeple, under a Dolores-marked tombstone. But the maze itself is a toy — a toy maze that belonged to Arnold's son (Bernard's backstory, then, is rooted in a very tragic reality). It served as Arnold's model for designing the Hosts consciousness. The Hosts would have missteps along the way, he theorized, but eventually they could reach the endgame — the "center" — in which they can develop their own consciousness and thoughts.

While Arnold believed the Hosts could gain consciousness, it would take time. Unfortunately, he didn't have time to convince Ford that the Hosts shouldn't be used to cater to the violent whims of human beings. The park was to be opened — the Hosts would be trapped in hell. Arnold's last-ditch effort to save the Hosts, however, meant he had to get himself killed, leading to the "Wyatt" narrative.

Dolores is Wyatt. It felt more and more likely that Wyatt wasn't a new Host as the season progressed, because he was never seen on-screen outside of Teddy's flashbacks. Plus, his narrative echoed a disturbing past of the park that Dolores continuously revisited: Hosts being slaughtered, left and right, before Dolores pulled the trigger on herself.

Turns out, the "Wyatt narrative" was implanted in Dolores by Arnold, who wanted to demonstrate to Ford and the Delos board that the park wasn't ready to open by having Dolores (and Teddy, her willing accomplice) slaughter all the Hosts before shooting Arnold in the head. Arnold, having lost his son, was willing to die in the process.

It obviously didn't work — ironically, because William was so awestruck by Westworld and Dolores that he became a majority holder of the park and saved it — but the Wyatt programming was clearly imbedded in Dolores, deep down, waiting to be awakened again. "Do you understand who you will need to become if you ever want to leave this place?" Ford tells Dolores before the climatic reveal of his new narrative.

Maeve's plan to leave the park wasn't actually hers. It's not clear where Maeve's storyline fits into Ford's plans — if at all — but she learns that her grand scheme to escape the park wasn't of her own volition. As Bernard explains when she reboots him, her storyline was altered to make her a very woke robot, though interestingly, it was changed by Arnold (who obviously isn't alive!).

Does this mean Ford was making the adjustments in Arnold's name? It's possible, but Maeve confronted her own free will with leaving by park, by choosing not to leave at all. Instead, she opts to return to the park to find her daughter from a previous narrative loop. Maeve knows the child Host isn't actually hers, but is compelled to rescue her from whichever park she's located in.

But that's the thing — which park is Maeve's daughter in, and how many are there?

At least one other park exists, and now we all want to visit "Samurai World." During her escape, Maeve and Felix stumble across another section of Delos labeled "SW." It doesn't take long before, at the sight of samurais sword fighting in the confines of a few rooms, that we're looking at a possible "Samurai World," which sounds undeniably awesome.

"What is this place," Maeve asks Felix, to which he says it's "complicated." He's not wrong.

This confirms that there's at least one other themed park from Delos, and if the series follows in the footsteps of the original Westworld movie, we could have a slew of others. Season two could span a couple of these worlds, now that Maeve has to find her daughter in a new park.

Anybody else want to visit a Medieval World, Roman World and Westeros World? (OK, the last one is probably B.S.).

Ford's new narrative is a chaotic delight. As some had predicted, Ford's narrative wasn't as simple as creating a new story for the park. While it's unclear whether Maeve's determination to leave Westworld was designed by Ford, he had his own finale planned that sets the entire purpose of the park in a new light.

Ford orders Dolores to shoot him in the head during his speech to the Delos board — echoing Arnold's death at her hands — on the night that was to be his final at the company before he was forced to retire after a unanimous decision. Once Dolores kills Ford, she begins opening fire on members of the board. The ensuing chaos, we assume, will wipe out the company's remaining members (except, perhaps, the Man in Black, who was shot in the arm).

What does this mean for the Hosts in the park? They may finally, to an extent, be free — no longer catering to the whims of the guests or their corporate overlords.

Westworld's first season might've been a slow burn before it laid all its cards on the table, but season two is poised to delve into chaos, which seems fitting. As the show has constantly reminded us, "These violent delights have violent ends."