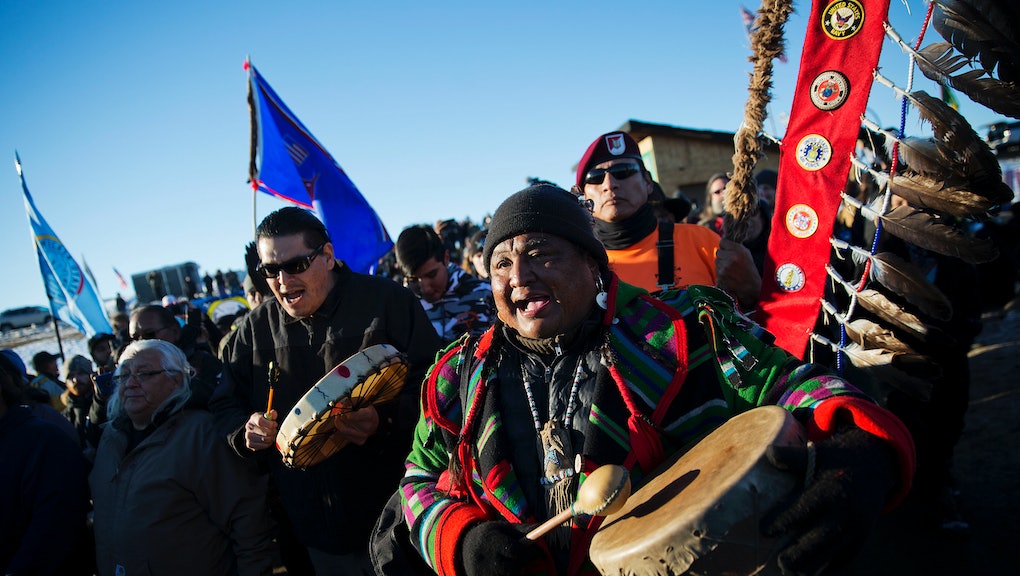 The Standing Rock protests face an uncertain future. But this moment won't be forgotten.

In a historic but conditional victory for the Standing Rock Sioux tribe, the United States Army Corps of Engineers chose not to grant an easement Sunday allowing the Dakota Access oil pipeline to burrow under Lake Oahe. The pipeline is more than 87% complete in North Dakota, but has faced heated opposition in recent months as thousands of protesters set up camp near Cannon Ball to halt its construction.

The victory depends largely on a friendly federal government being in power. The administration of President Barack Obama was sympathetic enough to delay — if not definitively block — construction on the pipeline by supporting a re-route plan and more thorough investigation of the project's potential environmental impact.

But there's no guarantee Donald Trump will honor the decision. The new president-elect isn't just openly antagonistic toward environmental causes; in 2000, Trump bankrolled a series of racist attack ads to prevent the St. Regis Mohawk tribe in New York from building casinos that competed with his in Atlantic City, New Jersey. The campaign claimed that Mohawk-run gambling facilities would bring "increased crime," "broken families" and "violence" to the area, according to the Los Angeles Times.

Nevertheless, Standing Rock Sioux tribal chairman Dave Archambault was cautiously optimistic about the Army Corps' decision Sunday, knowing full well that the Trump administration could try and reverse it as early as January.

Trump also recently owned stock in Energy Transfer Partners — the company that's building the Dakota Access pipeline — until he allegedly sold off roughly $50,000 worth of shares over the summer. He has since expressed his support for the pipeline's completion, but denied his support was in any way related to his stake in its builder.

"We hope that [Energy Transfer Partners CEO] Kelcy Warren, [North Dakota] Governor Dalrymple, and the incoming Trump administration respect this decision and understand the complex process that led us to this point," Archambault told the Guardian.

Despite the project's uncertain future, the mood among protesters and their supporters was overwhelmingly celebratory. And with good reason: by multiple accounts, the Dakota Access protest marks the single largest mobilization of Native American tribes in the past century, and has galvanized a stunning wave of support from all corners of the globe.

Thousands of indigenous North and South Americans, environmental activists, celebrities and U.S. military veterans have converged on the outskirts of the Standing Rock Sioux reservation since April to shield the Missouri River from the pipeline's potential dangers. The tribe and its surrounding communities get drinking water from the river. Many of them believe that if the pipeline runs under the river's Lake Oahe — as the route plan had proposed — the pipes could someday burst and poison their water with oil.

The stage was set for a showdown between indigenous protesters and the pipeline's builders. But what started as a peaceful antagonism turned violent on Sept. 3, when private security guards hired by the construction company unleashed attack dogs on the demonstrators. The violence escalated in increments over the next three months, but it mainly took the form of a heightened police presence, with riot gear-clad officers using tear gas, rubber bullets, sound cannons and fire hoses sprayed in sub-freezing temperatures to force protesters to disperse.

Despite it all, the Standing Rock Sioux stood strong. State violence in the face of peaceful protest only made the police look bad and the protesters more sympathetic. More supporters made the trek to North Dakota. Mic's Jack Smith IV, reporting from the Oceti Sakowin protest camp near Cannon Ball on Dec. 2, described the encampment as a "well-organized, small city," replete with hard-roof shelters, an improvised school for Lakota youth and an estimated 8,000 residents, some of whom now call the place "home."

Sunday's decision was a stunning culmination of all these efforts. For the time being, protesters seem to have succeeded in ensuring that the Dakota Access pipeline will not cross the Missouri River. But there's larger significance to their victory too. Sunday's win was historic because it was among the first of its kind in years.

Ever since the late 1960s and early 1970s — when indigenous people occupied Alcatraz Island, Wounded Knee and the Bureau of Indian Affairs; marched the Trail of Broken Treaties, a cross-country protest in 1972 aimed at drawing attention to Native treaty rights and and living standards; and embarked on the Longest Walk to demand greater tribal sovereignty — indigenous activism in the U.S. has drawn little public attention. Most attempts by Native Americans to demand tribal sovereignty, land rights and environmental justice from the government have escaped the attention of the broader American public.

But today, these issues are in the national spotlight. News crews and supporters of the protesters have flocked to the Standing Rock camp sites to keep Americans abreast of the latest updates. In doing so, they've helped turn what started as a tiny demonstration on the plains of North Dakota into perhaps the banner environmental protest movement of the 21st century.

The future of that movement remains uncertain. Trump will be president in less than two months, making for a formidable enemy. The Army Corps of Engineers could change course and rule that laying the pipeline under Lake Oahe is an environmentally sound decision after all. Meanwhile, Native Americans face related environmental conflicts across the country. Fallout from the Gold King Mine spill in Colorado continues to impact Navajo people along the Animas and San Juan rivers. In New Mexico, the proposed Pinon oil pipeline is its early planning stages, laying the groundwork for what could be another iteration of the Dakota Access battle.

What is certain is that it will be increasingly difficult for these conflicts to play out in obscurity. Once the conscience of a nation is awakened, it's hard to put it back to sleep. If the Dakota Access pipeline protests have taught Americans anything, it's that the vitality of indigenous protest lives on, despite years of their opponents hoping they'd finally been written off for good.