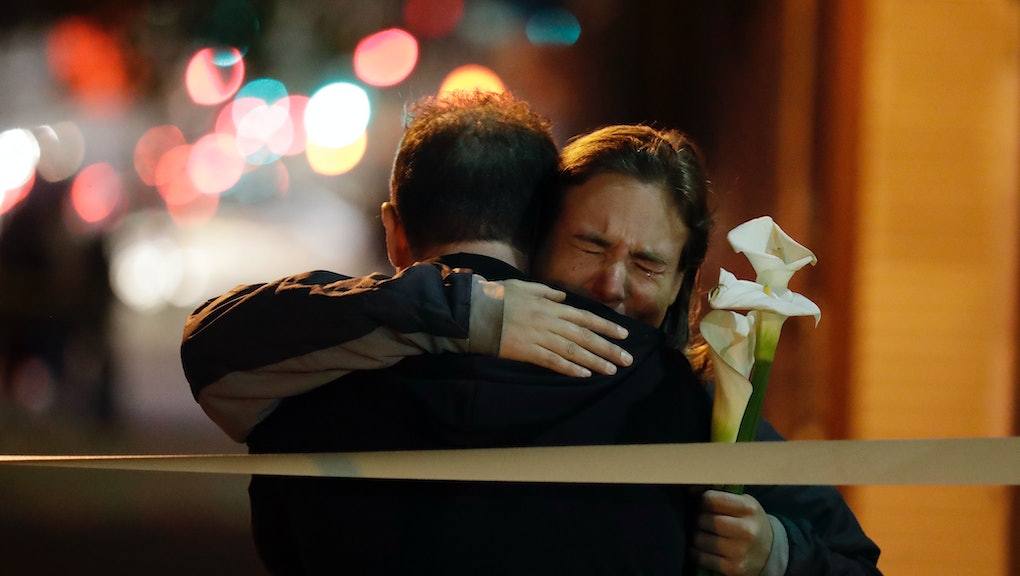 At least 36 people are confirmed dead after a massive blaze broke out during an electronic party at the Ghost Ship warehouse in Oakland on Friday. The fire is one of the country's deadliest in recent years, according to NBC.

CNN reported that roughly 30% of the building had been searched as of last Sunday; authorities expect death toll to rise as the search continues. Alameda County Sheriff's Sgt. Ray Kelly said it could take weeks to identify the victims. As a result, officials have asked relatives of possible victims to bring items like toothbrushes and hairbrushes to check DNA samples. So far, only 11 victims have been identified, according to the Bay Area NBC affiliate.

Here's what we know about the tragedy so far:

The building had a history of violations

According to the New York Times, the Ghost Ship warehouse served as a hub for "striving artists." The warehouse's website shows a picture of the space with art, antiques and other wooden items cluttering the area, which could have played a role in the rapid spread of the fire. The Guardian reported that the warehouse had a history of blight violations, including citations for "hazardous" trash "piling up on the property." Ghost Ship only had a permit to operate as a warehouse, not a party site or residence.

An anonymous source told the Guardian, "It just looked like a fire waiting to happen."

The cause of the fire remains undetermined

Dozens of young people had gathered at the warehouse for a party — but shortly after the party began, billows of black smoke and big flames were destroying the warehouse. Authorities opened an investigation last Sunday; however, they have not been able to determine how the fire broke out, according to the New York Times. Preliminary reports show that the building lacked sprinklers and had only two exits, and that the building contained a staircase was made up of wooden pallets.

Investigators are working to find any criminal activity that might have caused the inferno. "When you have the amount of victims that we have, you don't rule anything out," Sgt. Kelly told the Los Angeles Times. Sgt. Kelly added that the majority of the victims were in their 20s and 30s, and some of them were teenagers.

As of Monday morning, 70% of the building had been searched, but authorities have halted recovery efforts due to the structure's unstable condition, according to Bay Area TV station KCBS. "For us as firefighters, to work under a wobbly, potentially collapsing exterior wall is extremely dangerous," Oakland Fire Department Chief Melinda Drayton said at a press conference today. "We will not put our firefighters in danger at this point, and we will not put Alameda County Sheriff's [officers] in that precarious situation with us.

The White House issued a statement

On Monday afternoon, President Barack Obama offered the following statement on the tragedy:

Today our prayers go out to the people of Oakland, California, in the aftermath of this weekend's deadly warehouse fire — one of the worst fires in the state's history. While we still don't know the full toll of this disaster, we do know that an American community has been devastated, and many people — including young men and women with their whole futures ahead of them — have tragically lost their lives. I want to thank the dedicated first responders who have been working tirelessly for days to contain the situation, recover victims and treat the wounded. My administration is in close contact with our state and local partners on the ground to make sure that authorities have everything they need as they continue response operations and investigate the cause of the fire. Oakland is one of the most diverse and creative cities in our country, and as families and residents pull together in the wake of this awful tragedy, they will have the unwavering support of the American people.