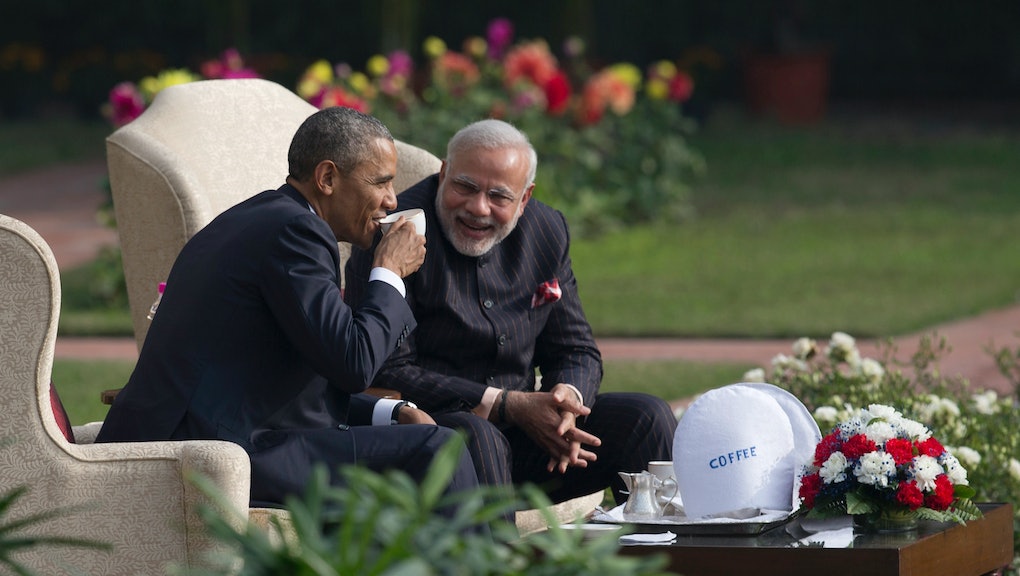 The controversial Indian Prime Minister Nerendra Modi and leader of the Bharatiya Janata Party has been voted Time Person of the Year in the online reader's poll, which closed Sunday night.

Time's annual award recognizes the "the most influential person of the year, noting, for better or for worse, the person or group of people who have had the largest global impact over the past 12 months."

While readers seemed moved by his strong leadership and amicable relationship with the West, Modi has been connected to human rights violations that have left hundreds of Muslims dead.

Modi has faced censure and legal ramifications (which he managed to successfully evade) for his involvement in the Gujarat ethno-religious riots in 2002, during which time he was the state's chief minister. The riots left around 1,000 people dead, most of whom were Muslims killed by Hindus, and Modi is widely considered as complicit in the events, even accused by some as instigating them. Before becoming prime minister, Modi was banned from the United States for almost a decade, denied a visa request for his involvement in these bloody riots, where many Muslims were hacked and burnt to death.

"A top state official tells one investigation panel that Mr. Modi ordered officials to take no action against rioters,"  the New York Times wrote in 2014 of events in Gujarat in 2002. "That official was murdered. Thousands of cases against rioters are dismissed by the police for lack of evidence despite eyewitness accounts."

Yet Modi's Time votes far exceeded other major figures this year, such as Obama, President-elect Donald Trump, former Secretary of State Hillary Clinton and Facebook co-founder and CEO Mark Zuckerberg. The final selection will be made by Time editors and announced Wednesday. Modi already officially won the title in 2014.

"Well, he must have got the BJP supporters to vote 37 times each," Jayati Ghosh, an economics professor at Jawaharlal Nehru University in Delhi, said to Mic with a laugh.

"They're totally into this PR and the BJP basically have a huge unit which is devoted to all this. Apparently they have thousands of people on Twitter and anybody who says anything critical will immediately get trolled big time."

As far as impact is concerned, Ghosh said Modi's decision to demonetize some of the Indian currency in November — eliminating the 500 and 1,000 Rupee notes, or 86% of its money in circulation — qualifies him as one of the most influential figures of 2016. Given the size of India's economy, it invariably has ramifications for the global economy. And the move has hit the poor and women particularly hard given they tend to both lack bank accounts and larger sums of money, making small bills a necessity.

Economic discrimination aside, religious minorities have increasingly lacked protection under Modi's rule, Ghosh said. "Being a Muslim in the U.S. today is bad, but it was much worse in India and remains much, much worse," Ghosh said.

Kannan Srinivasan, a freelance writer and scholar in the history of right-wing Hindu nationalism, said in a phone interview that Modi's politics are not too far removed from fascism.

"His party and his organization developed a conscious emulation of European fascism in the '30s," Srinivasan said. "He's a longtime member of the [Rashtriya Swayamsevak Sangh, a grassroots cadre], which is modeled after Italian fascism. And there's a willingness to turn a blind eye to the way he's risen to power, with his systematic slaughtering in Gujurat."

But the West's legitimization of Modi is mutually beneficial, Srinivasan said. "In a way there's a quid pro quo," he said. "In return for America's approval, Modi and his party are willing to go along with American international policy. India's being drawn more closely into American policies to do with China, for example."

The BJP and Modi's office did not return requests for comment.