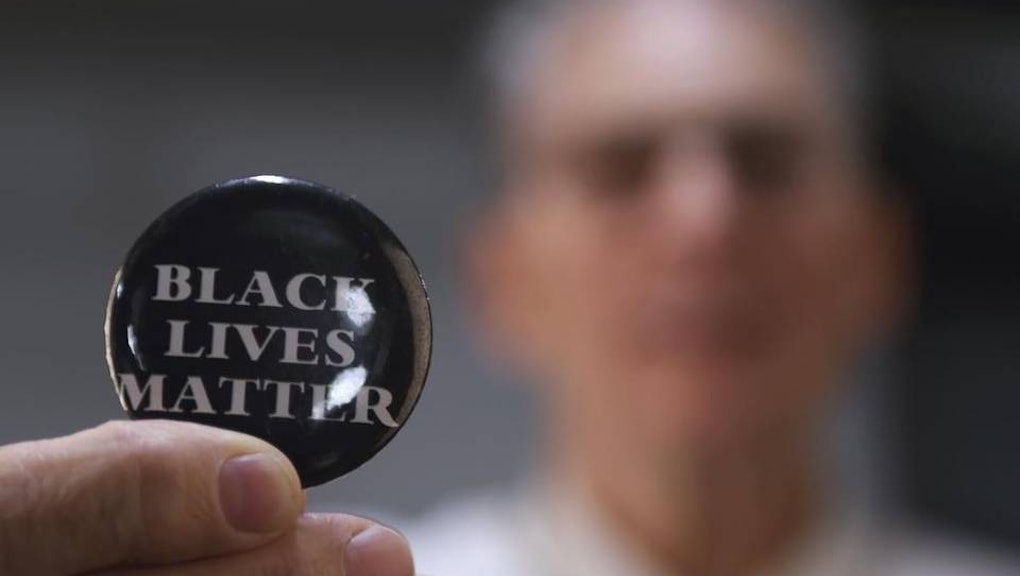 A 75-year-old substitute teacher at Clovis West High School in Fresno, California, was banned from working at the school last month after he wore a Black Lives Matter button to class, the Fresno Bee reports.

It's unclear what day David Roberts came to school wearing the button. But on Nov. 8, the Clovis Unified School District told him he was no longer allowed to teach at Clovis West.

Roberts, who is white, had worked for the district 15 years. According to the Fresno Bee, Clovis West High School has the largest percentage of black students (5%) in the entire district (3%). According to the Education Data Partnership, about 43% of the Clovis Unified School District's students are white.

According to the Fresno Bee, an incident report was submitted to the high school's human resources department on Nov. 8 by Deputy Principal Tony LeFore, school secretary Dawni Peisch and teacher Gabe Calderon. Roberts was substituting for Calderon when he wore the button. The three administrators wrote that students were offended by the pin, and that Roberts was not following the lesson plan.

"I was informed by an instructional assistant that the substitute teacher was wearing a political button and that some students were offended, and he wasn't following the lesson plan," the report read.

The report also claimed that Deputy Principal LeFore spoke with Roberts about the incident, informing him that the school is a "politically neutral" space. Roberts promptly removed the button from his shirt.

Roberts said the report was wrong to claim he didn't follow the lesson plan. He told the Fresno Bee that the plan in question only instructed him to conduct a test and assigned readings. Roberts said he believed he was terminated because LeFore told him a parent made a complaint, but did not provide any evidence of this to the Fresno Bee.

"A pin that reads 'Black Lives Matter' is not a political button," Roberts told the Fresno Bee. "It is a peaceful request to end this violence. It is not a protest. It is not intended to be anti-police and does not imply that black lives matter more than other lives. It simply says they matter, too."

Roberts said several students approached him after class and shook his hand out of appreciation and respect.

"That's why I was doing it: to show solidarity to the kids," Roberts added. "They really appreciated it. They understand it."

Roberts has received several complaints from members of the school district in the past for his political views. In 2012, Roberts was banned from Buchanan High School, which is in the same district, after a student complained that he "was against capitalism" during a lesson for an Advanced Placement World History class. Roberts insists that lesson was still within state standards.

"Clovis Unified claims you have to be neutral, but they're not neutral," Roberts told the Bee. "There's a set of beliefs you're expected to have there."

A learning institution should be a place where students should be challenged and exposed to different thoughts and philosophies. Ideally, it should also promote discussion of issues relevant to the world at large, and make students aware of realities outside of their community bubble. With that in mind, banning a substitute teacher who has worked with the school district for over a decade for simply noting that black lives matter seems antithetical to the purpose of education.

Clovis Unified School District did not yet respond to Mic's request for comment.