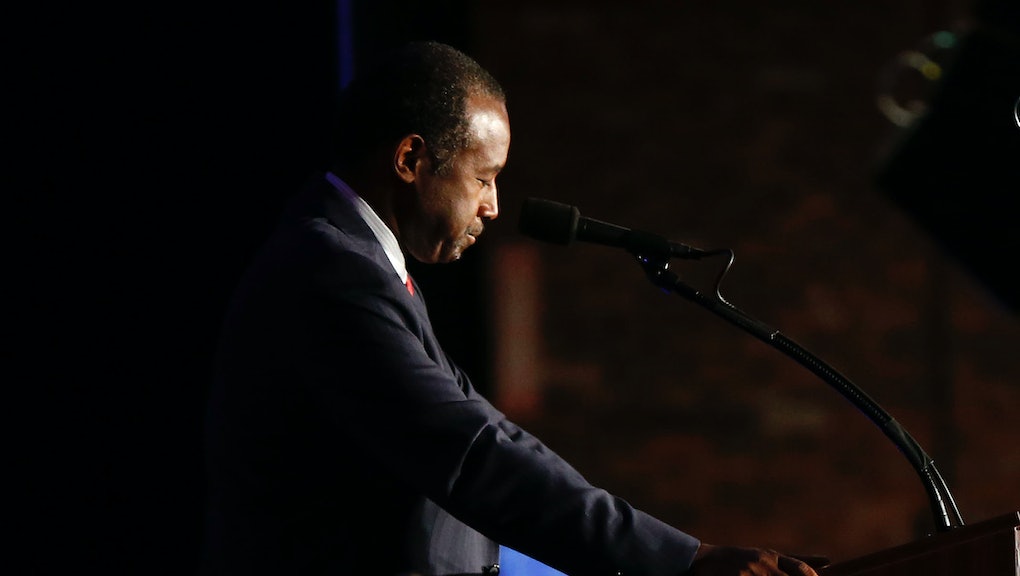 Ben Carson isn't just inexperienced for a HUD Secretary. His views are dangerous.

It's hard to tell what bizarre calculus led President-elect Donald Trump to nominate Ben Carson as secretary of the Department of Housing and Urban Development this week. The most logical conclusion is Trump was seeking a man with little relevant experience and whose personal philosophy could not clash more violently with the housing and development needs facing America's neighborhoods in the coming years.

Carson is a neurosurgeon by trade. He gained national prominence in the 1980s and 1990s for his brilliance in the medical field, particularly his famed separations of conjoined twins. But he has no experience implementing housing policy. He allegedly admitted as recently as mid-November he has no business running a federal agency.

"Dr. Carson feels he has no government experience; he's never run a federal agency," Carson's business manager and close friend Armstrong Williams told the Hill. "The last thing he would want to do was take a position that could cripple the presidency."

Yet, pending congressional approval next year, Carson could be in a position to do just that. As HUD secretary, he would be tasked with doling out subsidies for public housing to cities; giving federal grants to city, county and municipal governments for projects ranging from rental vouchers for low-income families to large-scale infrastructure development; and overseeing natural disaster relief in a nation increasingly wracked by the fallout from climate change.

But the danger of Carson's appointment lies not just in his inexperience, but also in his worldview. Carson grew up poor in Detroit, and said in an interview once that poverty "was more of a choice than anything else, that really depended on just how hard you're willing to work." In a later interview with Bloomberg in 2014, Carson said Americans have an "obligation" to pursue eco-friendly development projects, but admitted he was not sold on global warming being real, despite an estimated 97% of actively publishing climate scientists agreeing it is.

"There's always going to be either cooling or warming going on," Carson told Bloomberg. "As far as I'm concerned, that's irrelevant."

These outlooks both bode poorly for Carson's tenure at HUD. Poverty is not typically a lifestyle people choose, as many of us know; it is often determined by imposed factors like race and geography. Global warming is real, according to scientific evidence. Not coincidentally, during a phone interview Monday, Amy Liu, vice president and director of the Metropolitan Policy Program at the Brookings Institution, outlined the top two challenges she believes the HUD office will face under Trump's presidency: making sure housing is affordable for poor people and ensuring that urban areas prepare for the future through sustainable and climate-conscious development.

"The next HUD secretary is going to have to address our increasing number of high poverty neighborhoods, especially in suburban areas," Liu said. "Household incomes and earnings have stayed flat and have not kept pace with growth of housing costs. Meanwhile, cities are still at the forefront of linking housing, transportation and land use to create stronger neighborhoods. The next HUD secretary should build on that direction."

The HUD office, Liu went on to say, has spent much of its recent history trying to make up for its past mistakes. Decades of unsustainable urban development and racist housing policies like insurance redlining — which in the mid-20th century made countless potential homebuyers ineligible for federal home loan coverage solely because they were black — remain among HUD's most egregious failures. But under President Barack Obama, HUD more thoroughly enforced the Affirmatively Furthering Fair Housing Rule, a provision of the 1968 Fair Housing Act that requires federal agencies to fight housing discrimination on the basis of race.

So what happens when that agency's own secretary believes poverty is not a result of bad policy or racism, but bad decision-making on the part of the poor? What happens when the man in charge of national disaster relief doesn't take seriously our most pressing environmental threat, climate change? As with most of Trump's Cabinet appointees, the answer seems as clear as it is disturbing: We'll probably just have to wait and see and suffer, and pray we make it to the other side in one piece.