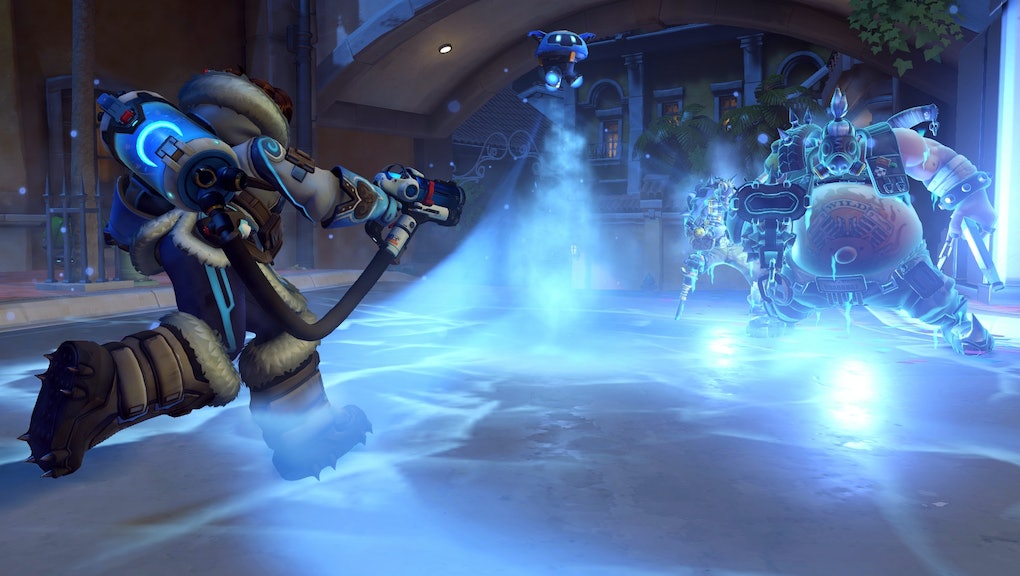 Hot off the heels of Overwatch's last in-game event tied to Halloween, fans are hungry to figure out what special plans Blizzard has for Christmas. The Overwatch Twitter just seemingly confirmed a Dec. 13 start date for the holiday-themed event, but details are still scarce. Some fans say they've already uncovered evidence for which characters are getting special unlockable items, but it's all still speculation at this point.

The special skins for these in-game events — like Mercy's witch costume for Halloween — seem to inspire the most excitement, and fans are already going wild on Reddit and Tumblr imagining what skins the rumored holiday event could bring to the Overwatch roster. Here are some of our favorite ideas fans have posted so far.

Several fans hope Zenyatta will have a skin in which his floating orbs change into something more festive — like Christmas ornaments or snowballs.

And since Tracer is so speedy, maybe she could be transformed into one of Santa's reindeer? Dasher seems appropriate.

This wintry concept for Symmetra has kind of a Frozen vibe, no?

The most important question is this: Who's going to be Santa? Torbjörn or Reinhardt? Blizzard tweeted out an image of Torbjörn as Santa in 2014, so maybe it's time to bring that idea to life.

Some concepts opt for something a bit simpler: Overwatch characters rocking festive sweaters. The character that seems to be most likely to receive such a treatment is Overwatch's resident dad, Soldier: 76. Here's a particularly cute illustration shipping Soldier: 76 and Reaper.

If you can believe it, Mei has yet to receive any additional skins since Overwatch launched. So this rumored holiday event seems like the perfect opportunity to give her something Mrs. Claus themed, perhaps.

Blizzard should unveil its plans for the holiday season soon, but until then, it's fun to keep speculating. Maybe Winston could be transformed into the Grinch? Or Junkrat into a mischievous elf? The possibilities are endless. If Blizzard announces a holiday event, Mic will let you know.

If you're ready for more Overwatch, you'll want to check out Mic's latest Overwatch news, like this weird story about Overwatch players debating Bastion's gender on Reddit, information on Symmetra's rework, details on season three of competitive mode, the latest patch update notes, a look at the new Oasis map on the PTR, Terry Crews' desire to voice the rumored new hero Doomfist, Mic's guide to playing Sombra, which characters players speculate will be revealed as LGBTQ and information on the months-long alternate reality game that led up to the reveal of Sombra.