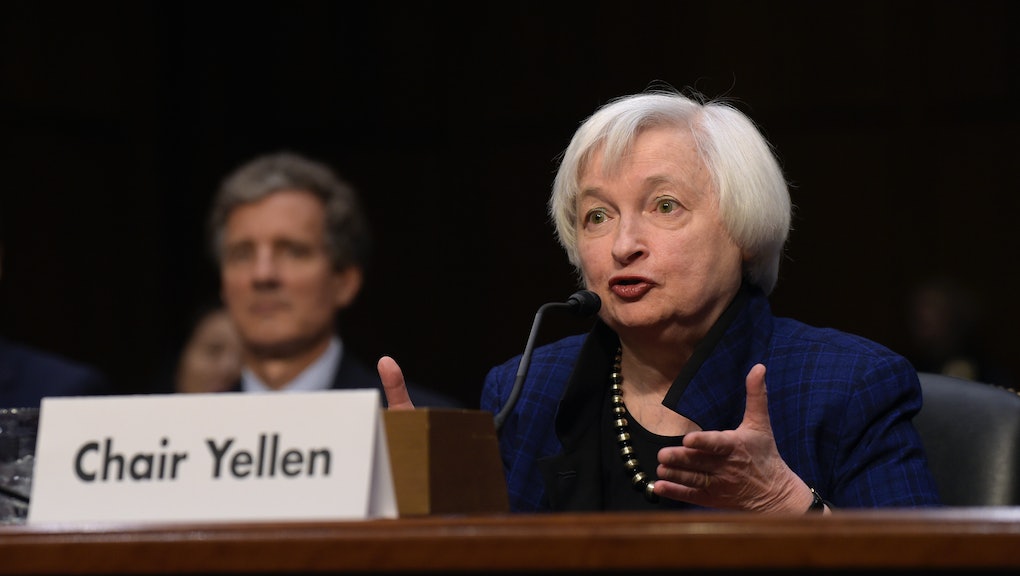 It finally happened. The Federal Reserve announced an increase in interest rates Wednesday afternoon, a long-anticipated move after months of steady improvements in United States employment signaled the economy is now strong enough to sustain the hike — the first increase since December 2015.

It's one of the most talked-about stories of the year in the financial world, since interest rates have a huge impact on the economy.

Indeed, the Fed decision will affect you.

Rates affect the prices you pay at the store — and how quickly they go up, aka inflation —  as well as the interest rates you pay on credit cards and loans, how fast the cash in your savings account grows, and how hard it is to get a job.

Very broadly, higher rates tamp down on price inflation, while lowering rates can prompt more hiring. When the fed funds rate goes up, interest on loans, credit cards and savings accounts move to catch up, too, though borrowers generally get hurt faster than savers get helped.

As you can see from the below chart, the Fed changes rates fairly often, depending on what it thinks is needed to keep the economy humming along.

Seeing that this one is the first rate hike in a year, you'll want to read on to understand the ways the change could affect your finances.

The Federal Reserve raises interest rates in part to slow down price inflation.

The Federal Reserve was set up by Congress in 1913 to help keep the economy strong by maintaining high employment, so people have jobs, and keeping inflation down, so that goods don't get too unaffordable.

During the financial crisis, for example, the Fed dropped interest rates to practically zero to get the economy going again. This is often referred to as monetary stimulus, and is an "accommodative" policy. Even with the new hike, the Fed's policy is still relatively accommodative — with low rates relative to history.

The main lever the Fed has to influence the economy is by setting how much it costs to borrow money. If the economy is too slow, you lower interest rates so it gets cheaper to borrow. This makes people spend more, and the economy speeds up and grows.

On the flip side, there is such a thing as an economy that's growing too fast, and sometimes you have to turn the temperature down a notch.

This is because in a booming economy, stuff gets more expensive, which is what people mean when they talk about inflation. If the Fed is worried that inflation might make things too unaffordable for most people, it might ramp up interest rates a little bit.

The problem is, when interest rates are too low for too long, it can cause problems, mainly for savers. If interest rates are low, then it gets really hard for normal people to find a place to stash their money and have it actually grow.

Will your credit card bill go up?

If you can lock in a 0% balance transfer offer now, you might want to pull the trigger, as rate hikes typically make life harder for people who need to wrangle in ballooning credit card debt.

"The important thing for any consumer to understand is that when the prime rate goes up, some things happen automatically and some things don't," said Nick Clements, a former consumer banker who founded the personal finance site MagnifyMoney. "One of the things that happens automatically is that you'll see the interest rate on your credit card debt go up right away."

In other words, once the Fed raises their rates, that in turn gets all the other lenders, banks and credit card companies to raise their rates as well.

Unfortunately, Clements said, the effects of the rate hike that are good for consumers (better savings accounts) take a little longer to kick in than the parts that are bad, namely higher credit card and mortgage payments.

Fortunately, the rate hike's effect on your credit card bill is going to be pretty modest, and you might not even notice. The last time the Fed raised rates in December 2015, for instance, the average credit card balance of $5,200 only netted an extra $1 in interest payments per month.

So Wednesday's changes to your credit card bill are unlikely to break the bank, especially if your debt is not out of control.

Still, Clements said, now is as "good a time as any" to shop around if you're in the market for a new card, or looking to consolidate your debt, since rates are only going to go up.

If you hold a variable rate private student loan, you could see the interest you owe go up.

But generally people with student debt don't have too much to worry about when it comes to rate hikes, because the most student loans are held at fixed rates set by the federal government.

Another exception, said Andy Josuweit, founder of Student Loan Hero, is if you're looking to refinance.

"I don't really know how much room borrowers have before refinancing isn't an economically smart option," Josuweit said. "The opportunity over the past four years have been that rates are super low."

What he means is that student loan refinancing became popular in the first place because low interest rates created a big opportunity for private lenders. With interest rates super low, it suddenly became attractive for student debt servicing companies like SoFi and Earnest to come in and buy up the student debt which accumulated when rates were much higher.

Because they could refinance at a lower rate, this was also attractive for consumers as well. If rates keep going up, Josuweit said, refinancing is going to cost more too.

"If you're looking at refinancing you want to do it sooner rather than later," he said.

How will higher interest rates affect the stock market?

Volatility is the industry term for when stock prices (or any prices for that matter) go up and down really fast.

And as rate hikes come into effect into 2017, you may want to buckle yourself for a little bit of a ride, Bankrate senior economist Mark Hamrick said.

"It's a valid assumption that we're entering a period of increased volatility in financial markets," Hamrick said. "And it might be for people who are investing in stocks or mutual funds for retirement, some of that volatility could be off-putting."

That sentiment was reflected in the markets on Wednesday morning, which were mostly down, signaling that investors are feeling extra cautious.

That's because volatility is primarily driven by uncertainty, and there are a few things up in the air right now. On one hand, interest rate hikes make investing in the stock market less attractive, which generally drives prices for stocks down. But specific sectors, like banking stocks, can benefit, as banks will soon start collecting more interest on the cash they keep on deposit.

Finally, there's also the matter of President-elect Donald Trump. So far, the election has driven a record run-up in stocks, which suggests companies like what they're hearing from Trump in terms of his plans to lower corporate taxes and increase infrastructure spending.

The problem with record stock prices, at least for Trump, is that people are already wondering how much longer the market can keep going up without correcting — aka falling back down again.

How do higher interest rates affect buying a home?

One of the most obvious ways interest rate hikes affect everyday people is by changing how easy it is to buy and sell a home.

Since a house is the biggest purchase most people make, this is where a tiny difference in your rate can actually pack a pretty big punch, said Greg McBride, a certified financial adviser with Bankrate.

That's why aspiring homeowners have already started to speed up their purchases, so they can try and close the deal before it gets more expensive to borrow.

Clements suggested that the best way to combat higher mortgage rates is to use a cost-comparison tool created by the Consumer Financial Protection Bureau which lets you see the average rates people are getting in different neighborhoods.

The tool doesn't show you specific rates being offered by actual lenders, but it lets you calculate the average rate typically offered to someone with your credit, income, and in your desired area.

Armed with that average rate, you'll have a lot more leverage if you're trying to negotiate your mortgage.

Are higher interest rates ever good? The cash in your savings could grow faster.

The general rule of thumb, Clements said, is higher interest rates are worse for borrowers but better for savers with money in the bank.

One of the main reasons savings accounts haven't done much for consumers over the last few years is low interest rates. But as rates go up, people putting their money in savings accounts — a good idea for millennials — will earn more interest and see their cash grow faster.

Clements said now is a good time to consider changing banks: You might specifically want to look at online banks — which tend to have a competitive advantage because of low overhead costs and tend to offer savings accounts that earn more than those at a typical big bank.