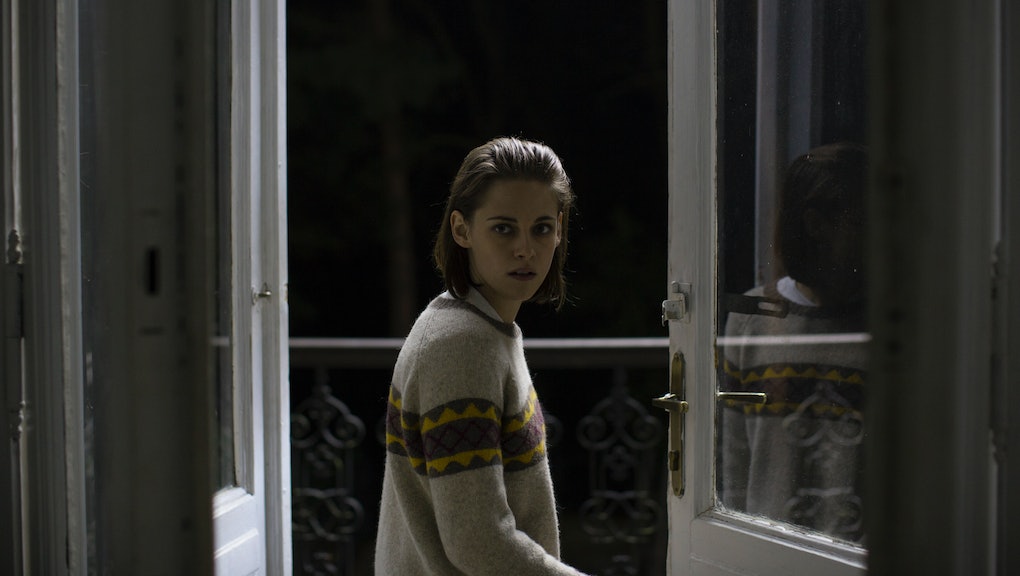 From the chorus of boos that beset its debut at the Cannes Film Festival this year, one would expect Personal Shopper, the ambitious new film from Olivier Assayas, to be a cinematic disaster on the level of The Sea of Trees. But Personal Shopper's harsh response is less a representation of the quality of the film, and perhaps directed at its star. It's led by Kristen Stewart, and there is a glaring hypocrisy in how we treat Stewart's personal transgressions — cheating on then-boyfriend Robert Pattinson — compared to the likes of, say, Woody Allen.

Granted, Personal Shopper's biggest flaw is that it struggles to fit a specific genre, which could also alienate moviegoers. It's equal parts supernatural thriller and brooding Parisian character drama, but the thematic contradictions don't hurt Personal Shopper as much as it should. And that mostly falls on Stewart's shoulders.

Stewart stars as Maureen, an American living in Paris who is — as the title subtly intimates — a personal shopper. Maureen works under rich socialite Kyra (Nora Von Waldstätten), and as is made evident in the sole onscreen interaction between the characters, she's a rather insufferable boss.

The reason Maureen lives in Paris, however, relates to her twin brother, Lewis. Lewis dies before the start of the film from a heart attack, which stemmed from a heart complication the siblings share. The siblings had made a pact, Maureen explains, that if one of them died, then that person would try and send a message from beyond the grave to the living sibling. This is particularly prescient for Lewis, because he was a medium prior to his death, and believed Maureen shared his gift.

Personal Shopper, at first, holds these narratives as disparate. Maureen would go through the ins and outs of her job purchasing clothes for Kyra, then return to the estate that Lewis died in and attempt to make contact with him and find his "message." It's when these contrasting storylines begin to intertwine, however, that Personal Shopper is at its most perplexing.

Maureen eventually does make contact with a ghost (yes, you will see a CGI ghost in this film), but it's not her brother: It's a malevolent spirit. Shortly after this encounter, she begins receiving mysterious text messages from an unknown number. One could interpret this as an iPhone conversation from beyond the grave, given the eerie tone, though it could also be the workings of a dangerous stalker who's enabling some of her vices.

The mystery texter, for instance, is aware that Maureen is interested in trying on Kyra's clothes — be it at the store or at Kyra's flat — despite her boss forbidding it. The person encourages her to try them on — and she does, but there's a foreboding sense of peril the longer she exchanges texts (she sends a dress selfie, not smart!).

The identity of her texting companion, along with the chilling repercussions of their conversations, is ultimately revealed, and it's where Personal Shopper's brief flirtations with horror are at their most effective. In the film's most unsettling sequence, Maureen takes her phone off "Airplane mode," leading to a plethora of delayed texts from the number, ushering the danger closer with every message coming through.

All of these moments, however, are carried by Stewart, who — if you haven't been paying attention since her Twilight days — is more than a budding indie actress; she's a legitimate talent. Without Stewart's presence in nearly every shot, it's unlikely that Personal Shopper would've been able to succeed with such a jarring juxtaposition between supernatural elements and daily shopping routines.

Assayas is clearly aware of this, considering Stewart has starred in his past two films — the other being 2014's Clouds of Sils Maria. The boos from Cannes should be but a ghost of the past for Personal Shopper, which is perhaps the scariest thing a film in 2017 can be: original and daringly different.