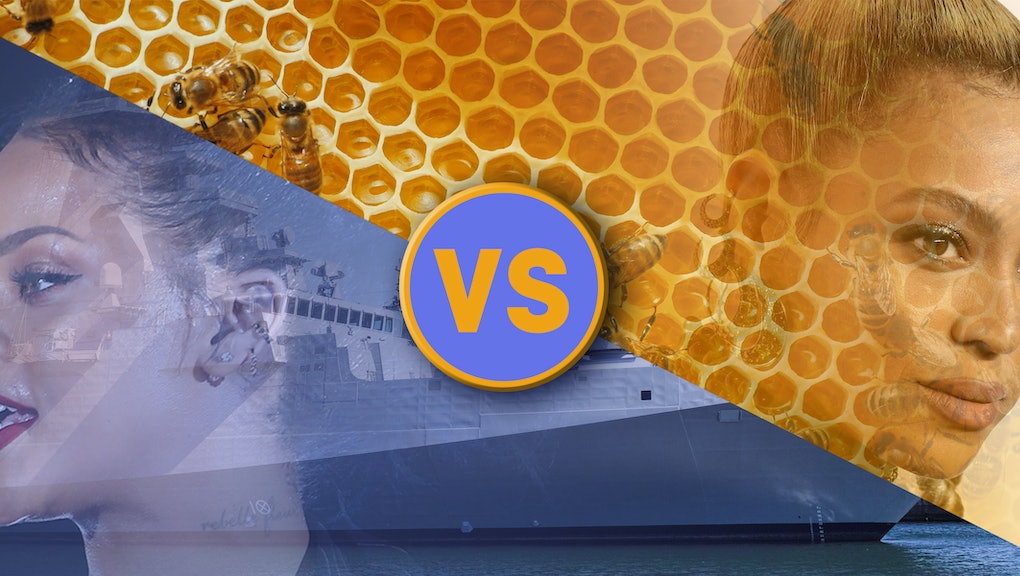 Stan wars: the Beyhive vs the Navy, why Beyoncé and Rihanna's fanbases refuse to get along

"The Navy are very delusional," said Beyhive member Ray Leday. "I think they get the accolades mixed up with talent. I hate when they are compared, someone who's ten years in the industry versus someone twenty years in the industry, who's put in the work, who's always working to be better, to overachieve, and I don't feel like Rihanna has that and her fans think that, and it's just... girl... it's not the same."

"The BeyHive are the most pathetic human beings to grace the universe," said Navy member Devin Francis. "I've never met a more narcissistic fanbase in my life. They hold Beyoncé to a level of excellence, the level of a Mariah Carey or Whitney Houston, and she just doesn't have the accolades to show for it."

The similarities between Beyoncé and Rihanna run deep. They are two of the most successful musical acts on the planet, period. They're also two of the most nominated artists at this year's Grammy Awards, with Bey receiving nine nominations for her sixth studio album, Lemonade, and Ri receiving eight nominations, six for her eighth studio album, Anti, and two for features on Kanye West's "Famous". Beyond accolades, they are connected via Beyoncés husband, Shawn "Jay-Z" Carter, the former Def Jam President and CEO who signed Rihanna to her first record contract in 2005.

But what stands out most about these artists by way of comparison is their indefatigable fan bases — collectively known respectively as the BeyHive and the Navy. The two groups regularly break into rabid, raucous often vicious "stan wars" which erupt between the easily rattled communities. The general stances of the two sides articulated in the quotes above. (The term stan, which originated in Eminem's 2000 song of the same name, refers to an obsessive fan.)

"I's very odd when I step back and look at it from a different perspective but it's addicting too," 18-year-old Jay said in an interview. "I can't explain it." (Asked to provide a last name he simply responded, "Z — Not even a pun, that's literally my initial.")

On Tuesday, December 6, the latest digital turf war erupted after screenshots were captured that showed that Rihanna had 'liked' an Instagram photo posted by a Navy member Majistii, the caption of which accused Grammy voters of snubbing Rihanna on nominations in an effort to not tie or pass Beyoncé's nominations.

The Behive didn't take long to pounce. Comments on the post included the usual dispatch of bee emojis, as well as impassioned call-outs: "FOCUS ON IMPROVING THOSE WEAK ASS VOCALS THEN MAYBE YOU WOULD'VE GOT THE NOMINATION," wrote on commenter.

BeyHive member zaddyonce offered their own take in a separate post:

"@badgalriri If you open your throat as wide as you open your pussy for everybody, maybe you could actually sing and have something worthy enough for [Album of the Year]. What grown ass woman close to her 30s likes shady posts about another artist because they're bitter? It's sad huh? Bald headed ass.... Coconut milk tittie ass bitch."

The buzz was loud enough to force Rihanna, herself, to weigh in.

"I'm petty [as fuck], yes," she wrote in an Instagram comment, claiming to not have read the original post's caption, "but this is just unnecessary! I wish y'all would drop this topic and see things from the bigger picture! We don't need to be putting black women against each other! We deserve to be celebrated!"

This is the latest in a long series of shots fired between the fan bases.

Earlier this year, headlines like "Rihanna slams Beyoncé with subliminal Twitter shade: Jealous over Queen Bey's comeback?" and "Rihanna Shades Beyonce On Twitter, War Ensues Between The Hive And The Navy" saturated the web after Rihanna's quick fingers 'liked' a tweet from a Navy member that included a not-so-subtle Bey put-down.

Again, the Hive did not miss a beat in taking the opportunity to casually drag Rihanna.

So why can't these fan bases stop arguing and attacking one another?

"Well, the Twitter feuds have became more and more entertaining," Devin Francis, 17, said in an interview. "The BeyHive have their shady one-liners, we the Navy have ours. Navy has full ownership of 'Swiper,' which is what we call Beyoncé because she has a history of stealing ideas, inspired by Swiper, the fox from Dora the Explorer and [the Hive] has 'Coconut' because Rihanna is of a Caribbean decent. Will it ever stop? I don't think so."

"Because nowadays it's about competition," Ray Leday, 22, said in an interview. "And the fact that there's two successful black women in the industry that are at the top of their game, I feel like the Hive and Navy have to have that one that's the best of the two. They're not willing to accept that they're just both great. But then again, what grown woman goes and 'likes' shade about another grown woman that doesn't even talk about you?"

"Just like Trump supporters, these fan bases hear one word or snippet of information from one side and just take off with it," Levi Karter, a 24-year-old member of the Navy (who has the Rihanna 'R' tatted on his chest in solidarity), said in an interview.

Where are these so-called "snippets of information" coming from?

And how did this feud, one neither singer has ever spoken on or even acknowledged first capture the public imagination?

To uncover that, we have to dial the clock back a decade to 2006, shortly after a then 17-year-old Rihanna signed to Def Jam Records, when Beyoncé released the single "Ring the Alarm" with some provocative lyrics:

"Ring the alarm / I been through this too long / But I'll be damned if I see another chick on your arm!"

Though the song's intended was never named, rumors mounted of an affair that had taken place between Jay-Z and Rihanna. In the unauthorized 2015 book Becoming Beyoncé biographer J. Randy Taraborrelli's alleged that a publicist had concocted the idea to spread rumors of an affair to bolster Rihanna's career. Sides were to be taken, and thus began a clear division between their most loyal of fan bases.

Perhaps most surprising was Rihanna's clear love for Beyoncé, made explicitly evident in the jacket of her debut album one year earlier. "Thanks to Beyoncé for being my inspiration," Rihanna wrote. "There could not have been anyone better to look up to."

Clearly there is — or at least at one time was — an affection. So where did things go astray?

"I think it's the fact that everyone knows that Rihanna and Beyonce are not cool and that they are not friends," said Leday. "I honestly believe that if people knew that they're cool and stuff, people would chill and be more accepting of both."

But there exists no evidence that the two aren't friends. "They are two women who support each other," Beyoncé bestie and former bandmate Kelly Rowland said in a March interview with New York Daily News.

So without tangible proof, couldn't this so-called feud be perceived as fan-generated, fan-flamed toxic war that's less about the artists themselves and more about what some would call a sadistic joy of engaging in Twitter feuds?

But some just see this as noise best muted.

In a 2016 piece for Vox, Yale psychology researcher Jillian Jordan explained why it's so easy to get sucked into fights online. "The internet is this forum that takes our drive to punish, and amplifies it, and leads to a huge collective overreaction in some cases, because every individual wants to express their perspective. When you put it all together, you get a mob mentality."

And thus, an otherwise innocuous action, that of merely double tapping a photo on Instagram, can be made to seem like a purposeful swipe from two celebrities that likely do not have the time nor interest in engaging in such a war.

"Irrational obsession doesn't give way to reasonable conclusions ever being reached," writer and cultural critic Michael Arcenaux said in an interview. "Besides, a lot of artists typically take shots at each other. There are old clips of Aretha Franklin mocking her contemporaries. There are mashups of pop stars dissing each other. Is it kind? No. Is it necessary? Not really. Will it ever go away? No. Best to just look away if you'd rather not [engage]."

Besides occasional droplets of shade, we'll likely never know the true dynamic between two of music's biggest titans. What we do know is that their standom's will continue to mythologize the few moments of artist interaction, and from that will emerge enough division to keep the eternal question, that of the true relationship between Queen Bey and Bad Gal RiRi, alive.

It's a mystery that, like whatever happened to Judy Winslow on Family Matters, will likely remain forever unanswered.