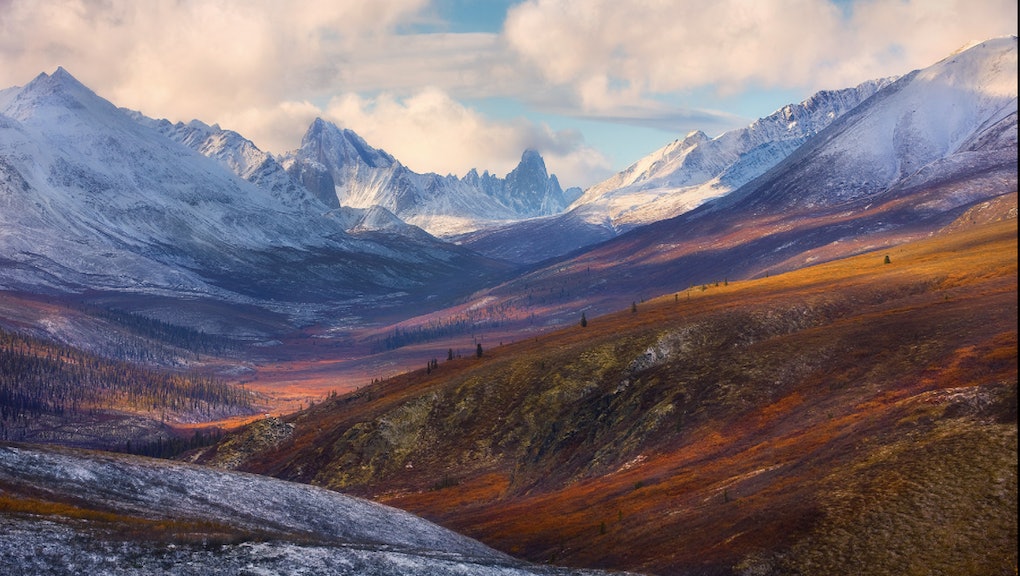 Yukon’s motto is “Larger Than Life” — these are the pictures and places that prove it.

In the northernmost part of the North American Cordilleran region in Canada, the landscape changes dramatically with the seasons.

The rugged peaks and deep valleys of the Yukon lie largely unmarked by humanity, with trees, fields, valleys and plains free of electric poles and wires, the highways uncluttered by fast food signs. To come to the Yukon is to leave much of civilization behind.

With its dramatic climatological swings — from subarctic winters to mid-80-degree summers — the Yukon offers much to discover year-round.

Autumn brings a majesty of picture-perfect panoramas, with valleys and hills in resplendent colours and hospitable to outdoor adventures.

Take a scenic day trip to Carcross or, to Haines Junction. While driving or hiking, keep your eyes peeled for wildlife. Once home to woolly mammoths and saber-toothed cats, the hills of the Yukon are alive with grizzly bears, elk, caribou, bison, black bears, sheep and, of course, moose, which outnumber humans two to one.

Most visitors come to the Yukon in late fall to witness the sublime wonder that is the Aurora Borealis, or Northern Lights. The electron-charged spectacle is an astounding light show of prismatic, dancing colours that appear most commonly in green and pink, but also in shades of red, yellow, blue and violet depending on atmospheric conditions.

Each night's light show is unique, with the most dramatic lights visible around midnight, away from city lights. The best times to witness the Aurora Borealis are the fall months of September and October, and in spring, from March to April.

Winter in the Yukon is surprisingly busy. February is the best time of the year to visit Whitehorse, the capital city — actually, the only city — in the Yukon, where you can check out arts and culture festivals like Frostbite Music Festival, the Available Light Film Festival and the Yukon Quest dog sledding race.

Polar bears tend to hunt along a narrow strip of the Yukon's Arctic coast and on the offshore ice. In summer, they stay with the retreating edge of the ice pack, moving north as the ice melts. In autumn, while the Beaufort Sea moves south to join with the Yukon coast, polar bears return to the seal hunting areas over shallow waters.

As winter gives way to spring, the countryside is awash in pastels. Days grow longer, and new life springs forth.

From March to May, the region is unpredictable with melting of snow, lots of rain and general wetness while days become warmer.

Summer in the Yukon is the season of endless days and midnight sun. At the June solstice, the sun never sets north of the Arctic Circle. Areas as far as Whitestone enjoy almost 20 hours of sunlight a day.

There are so few places left on Earth that remain so untouched by human development. For now, Yukon, at the edge of the world, is one of them. It's calling to you. What are you waiting for?