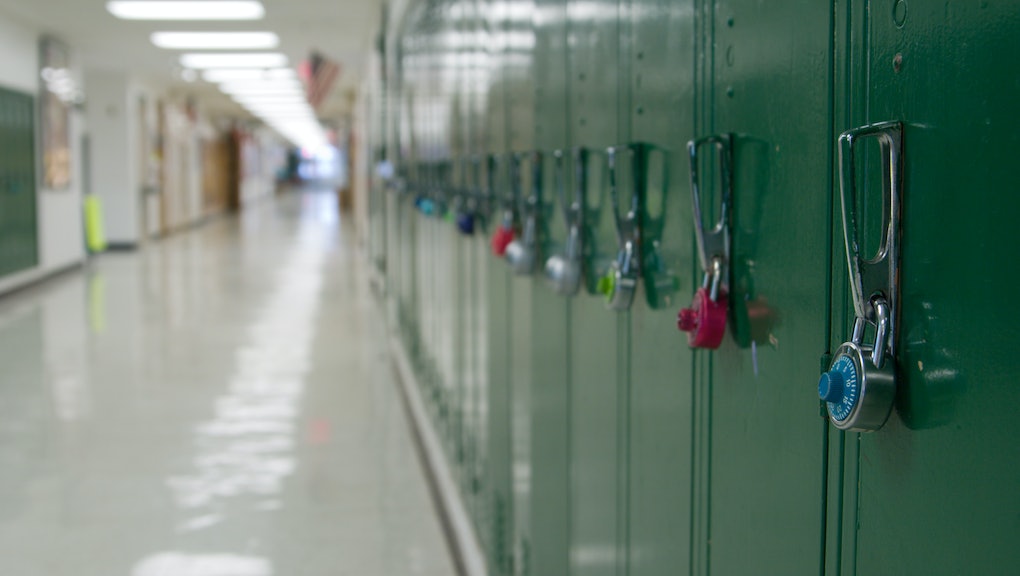 A report released on Wednesday by Human Rights Watch reveals that despite the "positive trends" for LGBTQ rights this past decade — including the repeal of "Don't Ask Don't Tell," marriage equality, the inclusion of sexual orientation and gender identity in federal hate crimes legislation — things are still pretty horrible for lots of young queer people.

For some, just getting through the day is like, as one parent of a gender nonconforming student put it, "walking through a hailstorm" of hostility every school day.

LGBTQ youth, according to the report, still "have disproportionately high rates of homelessness, physical and mental health concerns, and suicidality." They can be put into "conversion therapy," which is legal in all but five states, and in 2016, lawmakers in at least 18 states tried to pass legislation to keep transgender students from using the bathrooms and locker rooms that correspond with their gender identity.

And the report found that, because of policy, the attitudes of students and teachers and the actions and inactions of school administrators — school is a dangerous and scary place for LGBTQ kids. According to Human Rights Watch, the problems that LGBTQ students face in public schools in the U.S. "undermine a number of fundamental human rights that the U.S. is obliged to uphold under international law," rights that "all levels" of government have the responsibility to uphold.

The report includes interviews with students, teachers and parents in five states: Alabama, Pennsylvania, South Dakota, Texas and Utah. Ryan Thoreson, a Human Rights Watch Fellow who authored the new report, said in an email that "the report throws cold water on the assumption that progress in schools is uniform and inevitable."

"We have seen a lot of progress on these issues in recent years, and that's meant a lot for LGBT students across the U.S.," Thoreson said. "But even as attitudes and policies improve in some respects, they can worsen in others, and I think the rise of cyberbullying and the recent efforts to restrict bathroom access and extracurricular participation for transgender youth are sobering proof of that."

Most disturbing, perhaps, are the report's descriptions of day-to-day abuse that LGBTQ kids face, and the ineptitude or hostility they face when they turn to authority for help.

A 17-year-old trans student in Utah said that when he experienced bullying, he was admonished for being out. "I've been shoved into lockers, and sometimes people will just push up on me to check if I have boobs," he said. "And I have reported... that I've been physically hurt because I'm trans, and I remember one of the administrators said, 'It's just because you're so open about it.' I've reported slurs and they say they're going to go talk to them, but they never do."

According to the report, "Almost all of the students interviewed for the report reported encountering verbal harassment in their school environment, even in the most LGBT-friendly schools." This included slurs said out loud in the hallways, graffiti on the walls of bathroom stalls — even kids calling each "faggot" within earshot of teachers.

A 17-year-old genderfluid student in Texas said that "In sophomore history class, we had to stand up and say our name and one thing we're part of, and I said 'Charlie, and GSA,' and a girl said 'what's GSA?,' and a boy in the corner said, 'That's the faggot club.' The teacher just kind of looked at him. The teachers turn a blind eye."

And not only were teachers frequently reluctant to take action to help protect LGBTQ students, they were sometimes the bullies themselves.

A 17-year-old student in Utah said that, when he came to school wearing heels, the Vice Principal harassed him: "He followed me all the way down the hall talking, and said, 'You know what I'm going to call you from now on? Dorothy? Do you know who Dorothy is?' Because the heels were red. The tone of the entire experience was him trying to humiliate me in some way, and trying to get the people around me to turn on me, looking at them hoping they'll join in."

Students interviewed in the report described sexual harassment from other students, isolation and loneliness. One 16-year-old in Alabama said that his peers cut him out almost completely. "There aren't... many out kids, so that kind of gives a sense of loneliness," he said. "There was a rumor that spread that I had a huge crush on this guy in my grade, and all my relationships with other guys in the grade kind of halted at that point."

Many reported being bullied online, harassed with mocking comments and cruel anonymous messages. And the fact that classes routinely ignore LGBTQ issues and that LGBTQ-friendly extracurriculars, like gay-straight alliances, often face hurdles from parents or school administrators, only contribute to an atmosphere of hostility for LGBTQ kids in schools.

School dances, dress codes, even graduation ceremonies were all situations in which LGBTQ students described encountering discrimination, whether it was based on the gender of their dates, the clothes they wore or the names they used. Sometimes they chose to skip events completely over following discriminatory school "rules."

Overcoming the policies and attitudes that make schools unsafe for LGBTQ kids will take work — lots of work. And, heading into a Trump administration, many LGBTQ-activists are worried about what the future will bring. But our soon-to-be first lady, Melania Trump, has expressed her commitment to protecting young people from being "mocked, bullied or attacked," and had said that cyberbullying will be her pet issue once her husband takes office.

If the Trump administration is serious about protecting kids — all kids — then there are simple steps it can take "on day one that would make a meaningful difference," Thoreson said, including defending "existing protections for transgender youth in U.S. schools" and expressing public support for "employment protections and safe schools legislation that are LGBT-inclusive."

But in the event that the Trump administration does not prove to be an impactful ally for LGBTQ kids, there are "plenty of steps that local schools can take right away, too," Thoreson said, like training staff, supporting GSAs, and "incorporating LGBT topics in the curriculum and library resources."

As public as some of the victories for the LGBTQ community have been, this new report makes clear that privately, young LGBTQ people are still suffering. And "It gets better" can be an empty mantra for kids whose own experiences seem to suggest that "it" won't.

"Improvements at the national or state level aren't uniform, and they can be cold comfort for students who are still dealing with bullying and harassment, or being outed by teachers or counselors, or worrying about where they can safely use a bathroom at school," Thoreson said.

"Plenty of LGBT youth are still grappling with hostile school climates, particularly in rural areas where there are often fewer resources and sources of support, and the assumption that things are getting better shouldn't prevent us from the urgent task of making things better for every LGBT kid in school."