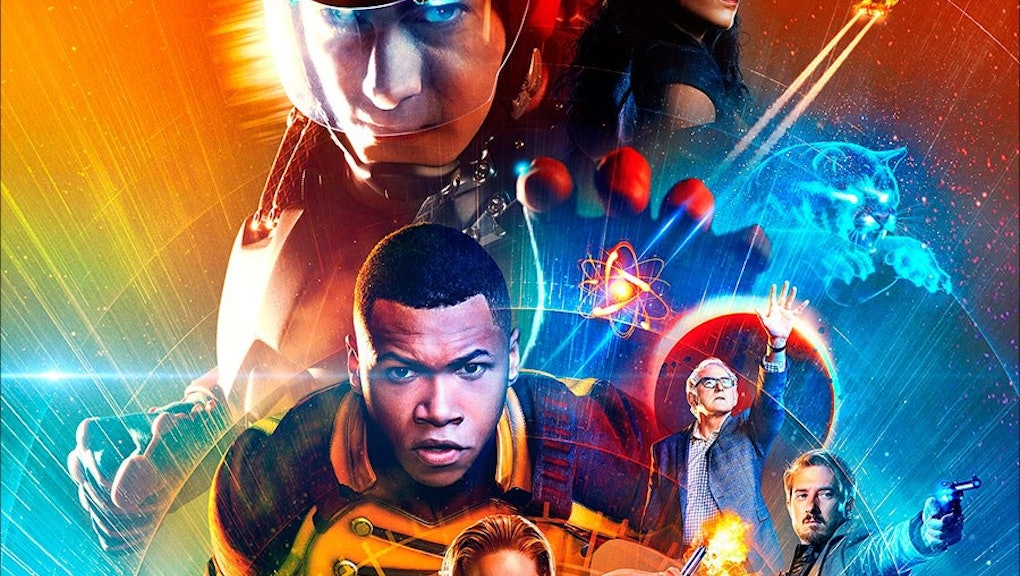 'Legends of Tomorrow' season 2, episode 8 recap: Who returns in the midseason finale?

In the midseason finale of Legends of Tomorrow, the legends traveled to 1920s Chicago to take down Al Capone after the interference of Damien Darhk, Eobard Thawne and their newest associate, Arrow's Malcolm Merlyn. The episode, titled "The Chicago Way," sets up Legends of Tomorrow for an exciting latter half of the second season.

(Editor's note: Spoilers ahead for season two, episode eight of Legends of Tomorrow.)

Season two, episode eight of Legends of Tomorrow was jam packed, as the series clearly tried to fit as much narrative in as they could before the show's winter hiatus. And while that normally leads to rushed storytelling, "The Chicago Way" turned out to be a strong installment in the time-traveling series.

It still should be expected that Snart will return (alive) later this season, but for now, he appears to be a figment of Mick Rory's imagination, likely due to some struggle of morality (more on that in a moment).

It turns out that "The Chicago Way" had plenty of villainous power to make up for Snart's lack of tangibility.

What is the Legion of Doom planning?

The Legion of Doom has not fully formed yet, but we certainly are close. While Thawne and Darhk have been working together since the season premiere, Merlyn was only just added to the fold. It is not fully clear yet why Thawne or Darhk would need Malcolm's help, but his addition does add to the threat posed to the Legends.

"The Chicago Way" finally shed some light on Thawne's nefarious plan. As it turns out, the Legion of Doom (let's call the villains this for simplicity) travels to the 1920s for the sole purpose of drawing out the Legends. How do they do this? They interfere with Eliot Ness' investigation into Al Capone. That's pretty cool.

The reason for helping Capone was to alert the Legends to a time aberration, and thus bring them to Chicago so that the Legion of Doom can steal back the amulet that Sara Lance stole from them in the 1980s (time travel is confusing isn't it?).

While the importance of the amulet has been unclear for the last few episodes, we now know it can be used as a compass to find the Sword of Destiny, which Thawne explains can be used to alter reality. Certainly this is something the Legends want to try and prevent.

Rory had a very interesting story arc in "The Chicago Way." Rory has always been the most out of place member of the Legends. Let's face it, he's a criminal pure and simple.

With Snart dead, a lingering question is whether Rory belongs with the team, or rather, does he want to be a member of the team? That question came into play through Captain Cold. While Snart did not return in the flesh, Wentworth Miller (the actor who portrays Snart) did play a major role in the episode.

He acted like the devil on Rory's shoulder telling him how great it is to be a bad guy. For now, Rory resisted, but expect this narrative to continue when the show returns in January. The reason Rory was able to resist his inner demons was Amaya Jiwe's Vixen.

Vixen has been a stellar addition to season two of Legends of Tomorrow, and her relationship with Rory has been one of the more interesting elements of the show. These two polar opposites make for some pretty good television. Whether there is something romantic between them or not is uncertain, but either way, a lifelong criminal and a hero from the 1950s would not seem to mesh.

The interaction between these two going forward will surely be one of the highlights of the latter part of the season.

What makes a time aberration?

"The Chicago Way" continued to explore Martin Stein's realization that he has a daughter. As we learn in the latter moments of the "Invasion!" crossover, Stein tells Jax that he has no intention of correcting the time aberration that is his daughter. This comes as a shock since Stein has been the voice of reason so often in convincing Lance not to kill Darhk, and in turn preventing the death of her sister. This issue comes up again in episode eight.

While trying to find Al Capone's famous ledger (to nail him on tax evasion), Lance and Stein are kidnapped by Thawne. Thawne sends Merlyn to interrogate Lance with the hope of retrieving the previously aforementioned amulet. And Merlyn came with a pretty enticing offer: He could help Sara get her life back. She would never get lost at sea, her sister would never die and she would be happy.

Lance resists the offer due to Stein's past teachings regarding the sanctity of time, and how it can not just be changed for selfish reasons. This leads Stein to reveal to Lance that he has a daughter due to his own meddling with time. And while shocked at first, by the end of the episode it does appear that Lance is willing to fight to protect Stein's new family. It will be interesting to see if that remains true, especially if Stein warns her later in the season not to bring her sister back.

"The Chicago Way" was a strong entry in Legends of Tomorrow's sophomore season. While it was a bit disappointing that Captain Cold did not return as a living person, it was still nice to see Miller back on the show. Hopefully, we get him in the flesh soon.

The episode also had some nice comedic moments, especially between Nate and Ray, who were having a bit of a sibling rivalry. Their competitive streak will likely get old should it continue, but for one episode it added some good character development.

The fight choreography was also strong, especially evident during the brief encounter between former League of Assassin members Lance and Merlyn (a one-time Ra's al Ghul). The stand-out of the show, though, was Rory and his budding relationship (platonic or not) with Jiwe. It would not be surprising if there is a future episode down the line where he must choose between her and a returning Snart.

The midseason finale, perhaps most importantly, leaves us wanting more. There is nothing worse for a show than to go on a several-week hiatus on a sour note. Legends of Tomorrow avoided that problem. Even if you did not enjoy the episode, "The Chicago Way" set up a latter half of a season that is sure to be explosive.

Not only do we finally see the beginnings of the Legion of Doom, a threat that is exponentially more compelling than last season's Vandal Savage, but we finally saw the return of Rip Hunter, if only for a moment.

How did Hunter get to become a Hollywood director? Will Captain Cold return in the flesh? What will happen if Thawne gets his hands on the Sword of Destiny? These are the burning questions as Legends of Tomorrow hits its hiatus. Ready for more?