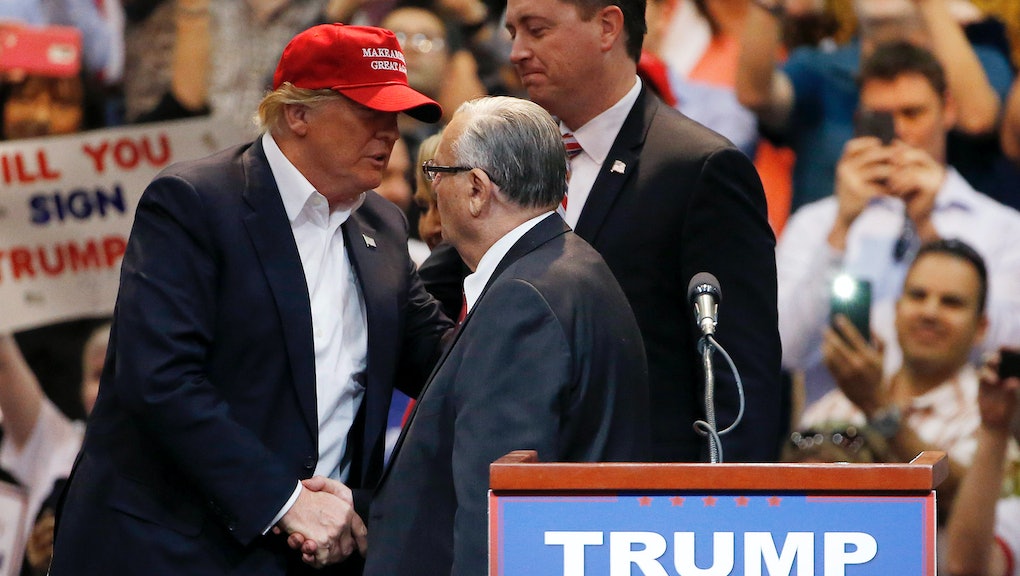 Trump Immigration and Arizona: Here's what you need to know

Immigration was one of Donald Trump's signature issues in his run for the White House. He began his campaign by calling Mexicans drug dealers and rapists, and his proposal to build a wall along the border of the United States and Mexico was a rallying cry at campaign events.

In Arizona, the state that has had the most unauthorized border crossings, Trump's campaign promises have concerned immigration advocates and emboldened their opponents.

The state, home of the controversial Senate Bill 1070 that critics say legalizes racial profiling, has long been at the center of debate about immigration in the United States. Trump won the state handily in November, made numerous stops there during the campaign and notched the endorsements of Gov. Jan Brewer and Sheriff Joe Arpaio — the self-styled "America's toughest sheriff" with a long history of "inmate abuses, unjustified arrests, racial profiling, brutal and inept policing and wasteful spending," according to the New York Times.

Arpaio, who, like Trump, promulgated the racist birther conspiracy about President Barack Obama, said at the Republican National Convention that "terrorists" are crossing our southern border and "committing serious crime," the Arizona Republic reported.

A man who helped author SB 1070, known as the "show your papers" law, joined Trump's transition team in November.

Kris Kobach, the secretary of state of Kansas, told Witchita's KWCH that he is part of the president-elect's "immigration policy team," the Arizona Republic reported.

According to that paper, Kobach has ties to anti-immigration Reform Law Institute, part of the Federation for American Immigration Reform, which the Southern Poverty Law Center has called a hate group. Kobach has discussed creating a "registry program" for Muslims entering the U.S.

SB 1070, which allowed police to make arrests without warrant if they have "probable cause" to suspect someone is in the country illegally, was met with widespread protest when it was signed into law by Gov. Brewer in 2010. (Brewer is also reportedly a member of Trump's transition team, focusing on homeland security and the border as well as education.)

The Supreme Court struck down key provisions of the law in 2012, and in September the state reached an agreement with opponents of the law who continued to challenge it. According to the deal, law enforcement cannot use race or ethnicity as a factor to check immigration status or prolong arrests due to suspicions over immigration status.

Could the border wall be the new land rights battle?

Trump has promised to build a wall along the United States' southern border —and make Mexico pay for it (something that country's president said it would not do).

Some of that wall would run along Arizona's border with Mexico, which some armed citizens have patrolled "looking for drug smugglers and undocumented immigrants."

But leaders of the Tohono O'odham Nation, an Arizona tribe whose reservation includes 75 miles of the border, say they will oppose a wall being built on their land.

"Over my dead body will a wall be built," Verlon Jose, the tribe's vice chairman, told Arizona Public Media. Jose said the tribe would oppose the wall on behalf of their people and the nation as a whole.

Trump has recently suggested that he may be backing away from the 30- to 65-foot wall he'd vowed, saying on 60 Minutes last month that some of it may be more of a fence. There is already a fence on some segments of the border.

Trump's backtracking has wall enthusiasts in Arizona worried that he won't be following through on his campaign promise, the reason many say they voted for him.

"Trump says he's going to build a wall and he'd better or he will have lied to the American public," Arizona cattle rancher Jim Chilton told Fronteras in November.

Donald Trump has said he plans to round up and deport 11 million undocumented immigrants — "in a very nice way," he said on 60 Minutes.

That would far surpass the number of deportations that have taken place during the Obama administration, which has deported more people than any other administration.

In 2007, Arizona was home to approximately 500,000 undocumented immigrants. In the years since, that number has dropped by 40%, in part due to the recession in December of that year.

Trump has voiced opposition to the Deferred Action for Childhood Arrivals program, which allows young undocumented immigrants brought to the U.S. as children to work legally, but has since appeared to soften his position, or at least make it less clear what that position is.

"We're going to work something out that's going to make people happy and proud," Trump said in Time this week.

In a statement reported by the Arizona Republic, Arizona State University President Michael Crow pledged the university's commitment to undocumented students and that they will "rise to the challenge" if the Trump administration kills DACA.

"It is based on the core principle set forth in ASU's charter that we are 'measured not by whom we exclude, but rather by whom we include and how they succeed,' " Crow wrote. Since then, other college presidents and faculty in the state have signed pro-DACA statements. Students at several Arizona high schools staged walkouts after Trump's election, some to protest on behalf of those whose legal status may keep them from doing so.