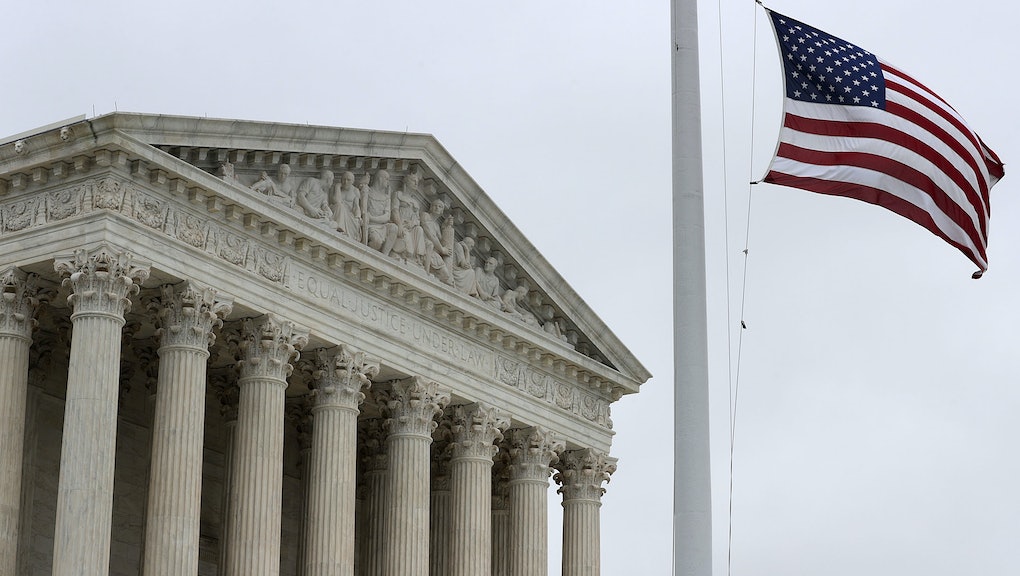 On this day in 2000, the Supreme Court ruled on Bush v. Gore. Here's what it means today.

This year's presidential election included an event that has only happened five times in American history: The winner of the popular vote did not become the winner of the election.

Though Hillary Clinton won the popular vote by more than 2.8 million votes, she lost the Electoral College count, and thus the presidency, to Donald Trump.

The last time this happened was in the year 2000. But different circumstances from that year led to one of the most distressful series of weeks in American electoral history, resulting in a complicated U.S. Supreme Court decision that was decided 16 years ago on this day: Bush v. Gore.

The 2000 presidential election pitted Democratic candidate and former Vice President Al Gore against the Republican candidate and Texas Gov. George W. Bush. It was the third-lowest turnout since 1952, with just 54.2% of the electorate coming to the polls.

It was also one of the closest elections in history, with Al Gore winning by just over 537,000 votes in the popular vote total. Although Gore won more votes from citizens, George W. Bush won more Electoral College votes in the end.

Some states were close, however, and since most states are winner-take-all affairs for Electoral Votes, it was imperative that close states' vote tallies be accurately counted. No state was closer, and more contentious, than Florida, which in 2000 had 25 Electors up for grabs.

The election hinged on Florida's Electoral College votes, and with the race "too close to call" in the early hours of the day following the election, no one was quite sure who had actually won.

Florida would eventually be put in Bush's column, which meant he would win the presidency. But because of the closeness of the race (just 1,784 votes separated the two candidates), an automatic recount was initiated. Terms like "hanging chads" soon entered the verbiage of the American populace, and it was unclear how long the recount process would take.

Florida judges opted to extend the recount process, which was coming close to the deadline for submitting the Electoral Vote count to Congress. Lawyers for Bush submitted an emergency appeal to the Supreme Court to stop the recount, arguing that the Florida judges had unfairly created new election laws in crafting their decision.

A 5-4 decision gives Bush the presidency

The U.S. Supreme Court heard the case, and in a 5-4 decision determined that Florida judges had indeed gone beyond their own jurisdiction in requiring an extended manual recount.

A strange afterthought accompanied the Bush v. Gore decision, however. The majority opinion, perhaps fearing a future event similar to what happened in 2000, wanted to ensure that their decision wouldn't be considered judicial precedent. "Our consideration is limited to the present circumstances," the Court wrote.

There are obvious parallels between the election in 2000 and the most recent election in November 2016. In both contests, a Democrat lost to a Republican in the Electoral College, yet won in the popular vote totals across the nation.

But it's unlikely that the decision in Bush v. Gore will have much, if anything else, to do with this year's vote. Though some argue that recounts in Pennsylvania, Wisconsin and Michigan could stall the official Electoral College vote, it looks like that won't be the case after all: Wisconsin has a self-imposed deadline for its recount and Michigan's recount is "completely over." Early Monday, a federal judge blocked Jill Stein's effort for a recount in Pennsylvania.

All Electoral College votes must be submitted by the states to Congress by Dec. 19, and to which candidate the states will submit their electors must be decided six days prior on Dec. 13.