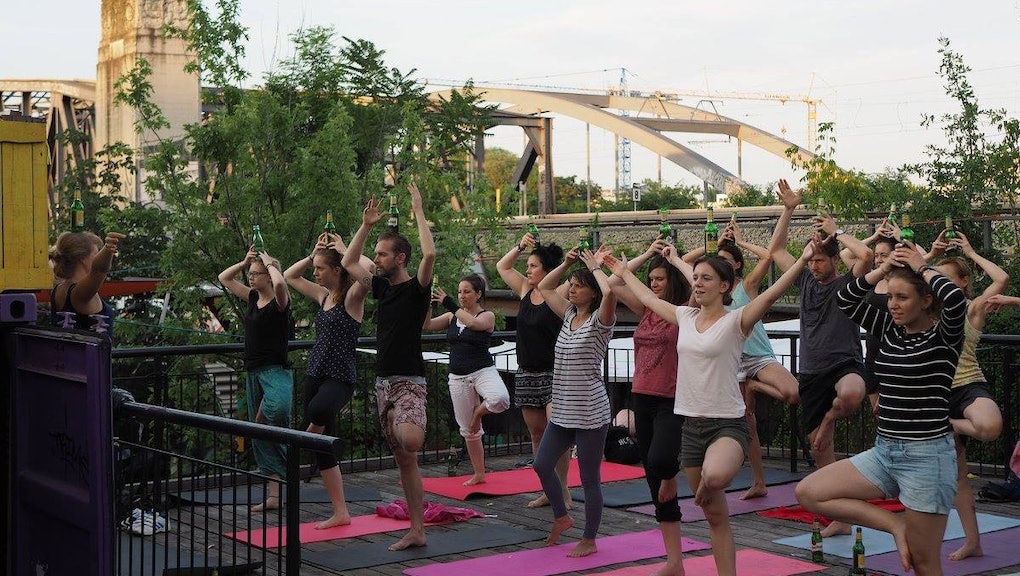 Would you rather be hitting the bar than the gym? Now you don't have to choose between the two. Beer and yoga aficionados have joined forces in the most delicious way possible: "Beer yoga" is a new trend sweeping yoga studios across the world, Sydney news site Broadsheet reported.

"The joy of drinking beer and the mindfulness of yoga compliment each other, and make for an energizing experience," Bier Yoga, a studio that originated in Berlin and is now leading classes in Sydney, writes on its website. "...We take the philosophies of yoga and pair it with the pleasure of beer-drinking to reach your highest level of consciousness."

What can a hoppy yogi expect during class? Based on the photos from Bier Yoga, there are unconventional postures that include tree pose with beer balanced on your head and "Lord of the Dance" pose while you sip from a bottle. The class itself costs a mere 5 euros, but it's another 6 euros to purchase two beers, ExBerliner reported.

But not everyone is thrilled with the gimmicky yoga classes, or even relatively standard Western iterations of yoga. They say commodifying yoga — or not honoring its ancient traditions or history — is an act of cultural appropriation.

"The current state of yoga in the United States and elsewhere in the Western world highlights the power imbalance that remains between those who have access to wealth, an audience and privilege in contrast to those who have been historically marginalized," Susanna Barkataki wrote in an article on the website Decolonizing Yoga.

Barkataki wrote that "decolonizing" yoga requires "mutual understanding, respect and a deep reverence and caring for the history." Perhaps a beer could help practitioners open up and connect?

Bier Yoga did not immediately respond to Mic's request for comment.