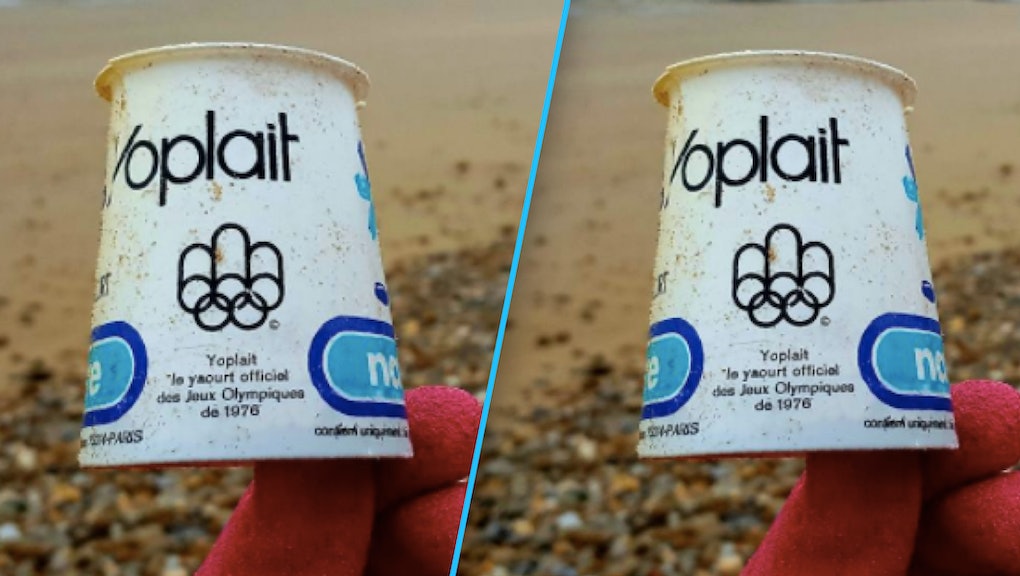 A yogurt cup that's older than the sum of Kylie Jenner and Jaden Smith's ages just turned up on a beach in Canada. On Nov. 25, a man named Rob Gordon tweeted a photo of a Yoplait container that appears to be from 1976.

The image went viral, with people deeming it both a collector's item and symbol of the grave consequences of pollution.

Recycling of plastic packaging by consumers began in the 1980s. Currently, just 60% of the U.S. population has access to a recycling program, the American Chemistry Council noted. And according to the Earth Institute at Columbia University, only about 6.5% of all plastics even get recycled.

When plastics aren't recycled, how long do they take to decompose in landfills? Researchers don't actually know, Slate reported. While some estimate plastic bags take 500 years to decompose, others argue it could take roughly 1,000 years for the bags to break down. Each type of plastic contains different properties that impact the length of time it takes to decompose, Kim Holmes — senior director of recycling and diversion at the Plastics Industry Association — said in an email.

Holmes said she couldn't speak to the materials of the 1976 yogurt container specifically, but noted yogurt cups today are typically made from  high-density polyethylene, polypropylene and even polystyrene.

Not only does plastic last for decades, but it's also a danger to fish, animals and humans. More than 90% of seabirds worldwide have plastic debris in their stomachs, according to the website of Plastic Oceans, an upcoming documentary. The film's website further explains that the concentration of toxic chemicals in plastic increases as it moves up the food chain, a process known as bioaccumulation. For example, smaller fish might eat seagrass containing tiny amounts of pollutants before being consumed by larger fish like tuna. By the time humans chow down on tuna, there could be a greater amount of toxins absorbed, National Geographic noted.

Roughly 8 million tons of plastic find their way into oceans each year — and that number is expected to double in the next 20 years, CNN reported. By 2050, there will be more plastic than fish in the ocean.

"We all have a responsibility to dispose of products properly after we use them," Kyra Douglas, senior director of global regulatory affairs at the Plastics Industry Association, said in an email. She noted that yogurt cups in the United States are accepted in most curbside recycling programs.

How plastic has evolved since 1976

Luckily, some countries and companies are trying to change the devastating effects of everlasting plastic. Earlier this year, France became the first country to ban plastic plates and cups, which will ostensibly reduce plastic waste over the long term. Holmes also pointed out that bioplastics are an alternative plastic "designed to quickly decompose under a variety of conditions." For example, a bioplastic item might be made from a renewable resource like corn or could break down easily in marine or soil environments. The bioplastics industry is expected to grow 20 to 30% in the next year, according to the Plastics Industry Association.

Other companies are leading the charge for a more sustainable future by swapping compostable products for plastic. The video below shows how a craft brewer uses malt and barley to create biodegradable six-pack rings. We'd cheers to that!