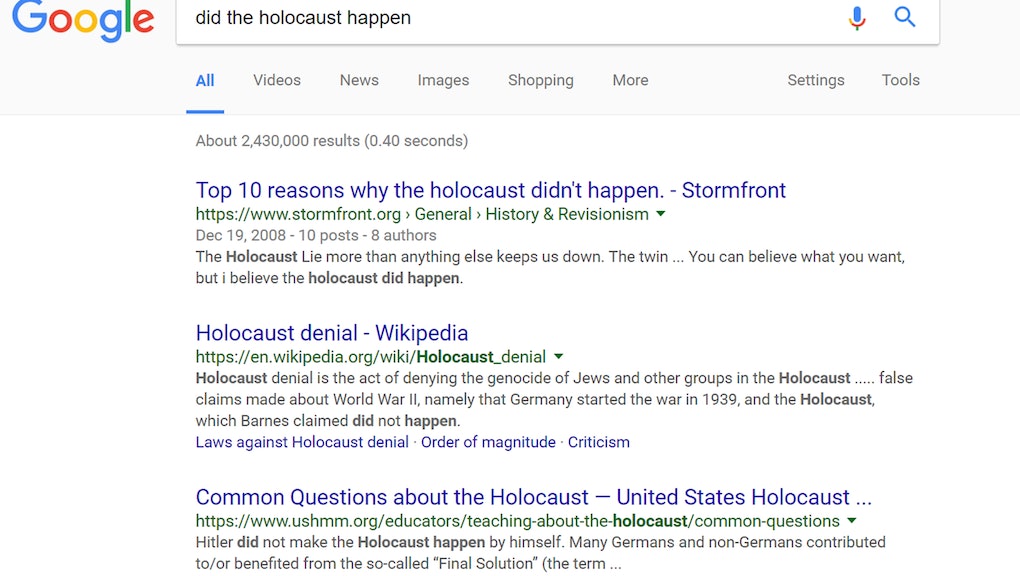 Google is still pulling up a Stormfront forum post calling the Holocaust, the brutal Nazi mass murder of at least 6 million Jews, 1.8 million Poles and millions of other persecuted peoples during World War II, a "lie" as of Monday evening. The Stormfront thread appears before the Wikipedia article on Holocaust denial and a list of common FAQs on the U.S. Holocaust Memorial Museum's website.

Other first-page search results include a forum thread from the "Committee for Open Dialogue on the Holocaust," which hate group-tracking nonprofit Southern Poverty Law Center lists on its website, and a page titled "The Holocaust hoax" on an anti-Semitic blog titled Expel the Parasite.

There is no dispute among academic historians the Holocaust happened, resulting in millions of innocent deaths, and its intentionality is supported by extensive eyewitness testimony and documentation kept by the Nazi regime itself. Holocaust denial groups rely upon distortions of the historical record to insinuate a massive conspiracy of the Nazis' enemies faked all the evidence — usually in service of the lie that Jews secretly control the world.

Google's algorithm is thus giving premium placement to what could charitably be described as some of the worst people in the world.

The anti-Semitic search results have unfortunate political implications this well, given that the alt-right, a loosely organized and mostly digital collective of far-right activists and white nationalists, came to prominence this year amid the rise of Republican President-elect Donald Trump. In a conference in November in Washington, D.C., white supremacist organizer Richard B. Spencer led members of the alt-right in cries of "Hail Trump, hail our people, hail victory!" — phrasing with clear fascist overtones.

In a statement to Fortune, Google suggested it would not be taking action to direct users away from Holocaust denial content, despite the fact the company already takes action on a wide variety of other sensitive issues, like suicide.

"We do not remove content from our search results, except in very limited cases such as illegal content, malware and violations of our webmaster guidelines," the statement read.