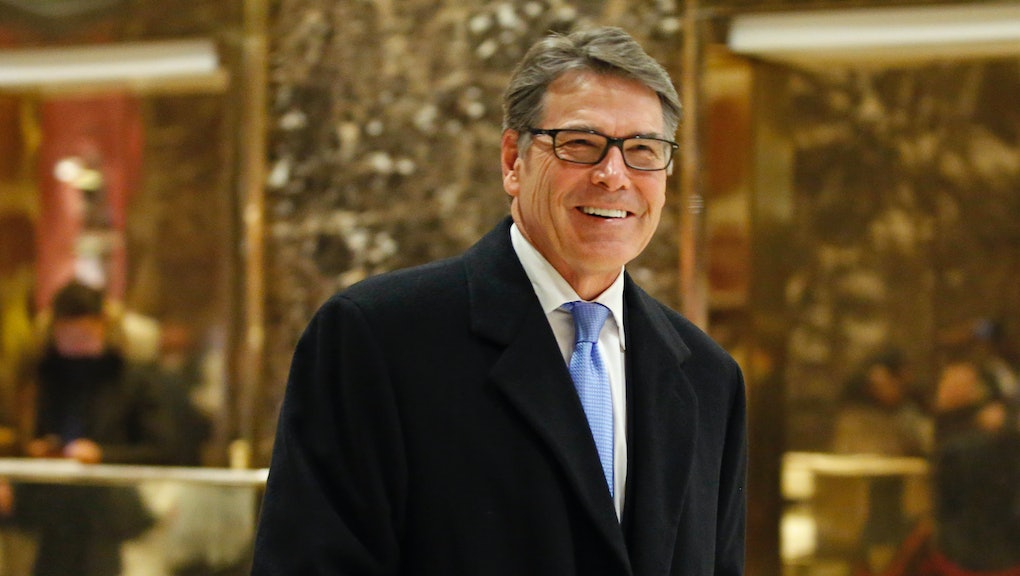 President-elect Donald Trump has chosen former Texas Gov. Rick Perry, who infamously forgot the Department of Energy's name in 2011 while running for president, to head that department in his future administration.

According to CBS News, "two sources directly involved in the transition and selection process" said Perry had met with the president-elect at Trump Tower on Monday and was subsequently chosen as the future nominee for the role. Trump selected Perry over two other final contenders, Trump fundraiser Ray Washburne, an oil and gas investor, and West Virginia Sen. Joe Manchin, a Democrat.

Perry sits on the board of two corporations, including Energy Transfer Partners, which is constructing the controversial Dakota Access Pipeline. On Dec. 4, a coalition of Native activists and allies successfully convinced the U.S. Army Corps of Engineers to deny a permit for the pipeline to run through Sioux Tribe land in North Dakota, though a future Trump administration could reverse the decision.

During a Republican presidential primary debate in 2011, Perry forgot the name of the Department of Energy while listing it alongside the Departments of Education and Commerce as government agencies he would eliminate as president. The gaffe decimated Perry's chances to win the nomination, but it would seem the governor may have the last laugh as the agency's new head.

The Department of Energy regulates U.S. energy research and production, nuclear waste handling and safety, and military nuclear weapons programs. It requested a budget of $32.5 billion in fiscal year 2017, and in 2013 employed 13,814 staffers as well as an army of contractors.

Perry is the latest in a line of Trump appointees standing in opposition to the mission of the agencies they would be hired to run. Trump's proposed head of the Environmental Protection Agency, Oklahoma Attorney General Scott Pruitt, is actually suing the agency over outgoing President Barack Obama's greenhouse gas emissions agenda. A recent report in Politico noted a Trump transition team questionnaire circulated among Energy Department staff sought the names of all employees who had worked on Obama's climate initiatives, with one current staffer calling it a "remarkably aggressive and antagonistic tone to take with an agency that you're about to try to manage."