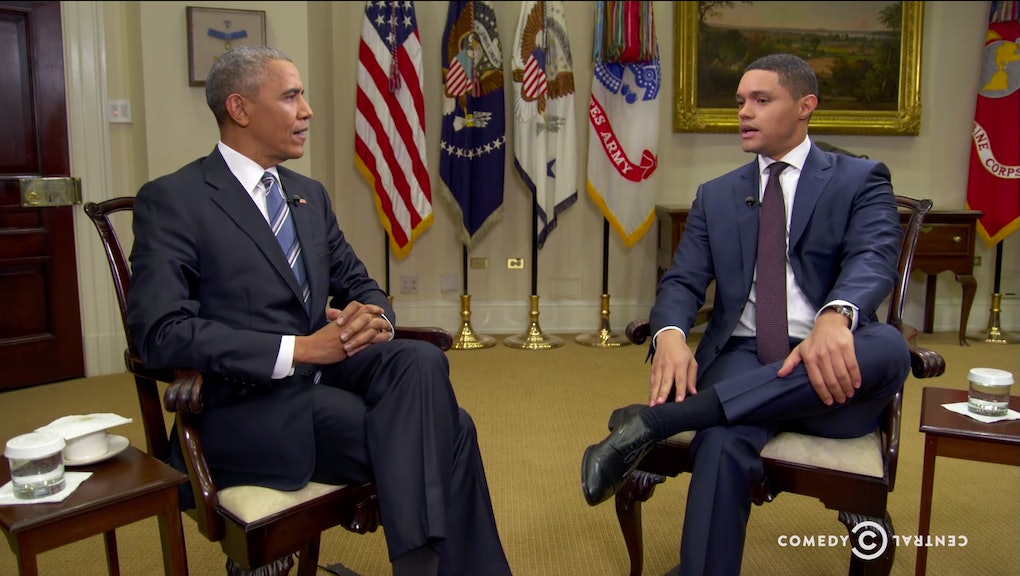 President Barack Obama didn't appear on The Daily Show, so much as he was The Daily Show on Monday, with his lengthy sit-down with Trevor Noah taking up the entire episode. With some guests, that effect might be straining, but Obama is an obvious exception — and that would be the case even if there wasn't much in the way of substantive topics for the two to discuss.

Noah's interview had fortuitous timing, however, as the CIA had recently assessed that Russia interfered with this year's election in favor of President-elect Donald Trump. Hmm, that's a big talking point. But as Obama reminded Noah, this wasn't necessarily surprising, as it was reported on prior to the election.

"None of this should be a big surprise," Obama says. "I don't think there was any doubt among anybody in the media or among members of Congress as to who was being advantaged or disadvantaged by the political gossip that was being put out in drip-drip-drip fashion leading up to the election."

When talking about the media's obsession with Hillary Clinton's emails, Obama didn't crack a smile — or give pause — when Noah tried to throw in a joking reference to Clinton campaign chairman John Podesta's risotto recipe. It echoed what Obama felt was an unnecessarily convoluted narrative in this election.

"The real question that I think we all have to reflect on is what's happened to our political system where some emails that were hacked and released ended up being the overwhelming story and the constant source of coverage — breathless coverage — that was depicted as somehow damning in all sorts of ways, when the truth of the matter was it was fairly routine stuff," he says.

Obama later imparted some advice to Trump, who has reportedly been skipping his daily intelligence briefings because he is "like, a smart person." "The truth of the matter is that it's a big, complicated world — it doesn't matter how smart you are, you have to have the best information possible to make the best decisions possible," Obama said.

Noah concluded the interview with the topic of race, sharing that he looks up to Obama because he — like Noah — had parents who are black and white. Noah wanted to know how Obama navigates topics of race without, as he put it, people complaining about "Oh, the black thing, again."

"The challenge we face today, when it comes to race, is rarely the overt Klansman-style racism and typically has more to do with the fact that, you know, people got other stuff they want to talk about and it's sort of uncomfortable," Obama said. "In that environment, where you're not talking necessarily about cut-and-dried racist behavior, but rather about the complex ways in which society is working these issues through."