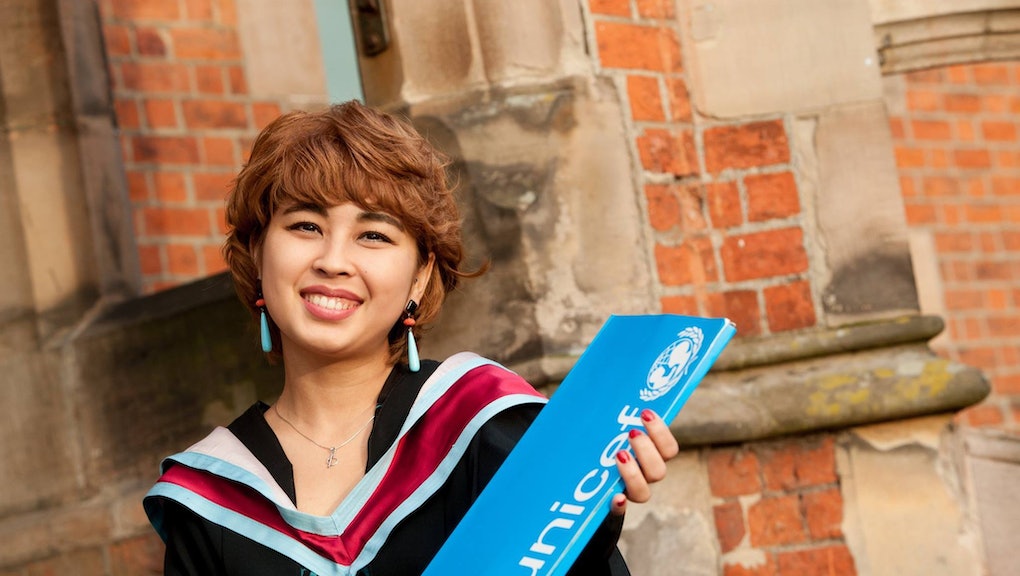 At a major university in Belfast, Northern Ireland, female graduates have been implored to dress more like Grace Kelly for their graduation ceremony, and less like Kim Kardashian West.

According to the Belfast Telegraph, when students at Queen's University Belfast registered for graduation online, they were greeted with an article titled "Style tips for graduation week: Wear it well." In that article, which was written by former student Thom Dickerson (who now runs his own tailoring company), women were told exactly what would be sartorially acceptable and what wouldn't be.

"Possibly the biggest mistake I see at graduation is girls treating the event like a night out," Dickerson wrote. "Graduation is a formal event and the dress code should match this. Short skirts and cleavage on show are totally out of the question. Think Grace Kelly, not Kim Kardashian, at least until the day is done: You can always change before heading out."

In other words: Think about dressing like a literal princess rather than an entrepreneurial, hugely successful and influential social media mogul.

That wasn't the only questionable advice offered. Dickerson also advised that female students use "discreet safety pins" to ensure they don't have any "last-minute wardrobe disasters."

What advice did men attending this graduation get? Why, they were just told to stick to clothing in darker tones, and maybe wear a pair of brogue shoes. They were not told to "Think Clark Gable, not Zac Efron's Instagram" or anything like that.

The article itself has been taken down from QUB's website, but students remain outraged. In an email to the university, acquired by the Belfast Telegraph, one post-graduate said that the advice was "offensive and condescending"

"I understand that the university wishes graduation to be a formal event. So, why couldn't they simply state 'formal attire'?" the student continued. "Looking to the comparisons the university has made here, it's pretty degrading. The reserved, conservative Grace Kelly is the example of 'good' while the 'louder' more 'risqué' Kim Kardashian is 'bad'?"

This is a ceremony honoring each of these students' intellect. Who's anyone to judge their outward appearance anyway?

Of course, this is not the first time female graduates across the world have faced a calculated and condescending dress code.

Clearly, these graduates have more to think about, and concern themselves with, than trying to please the eyes of anyone but themselves. Our advice: You do you, girls.