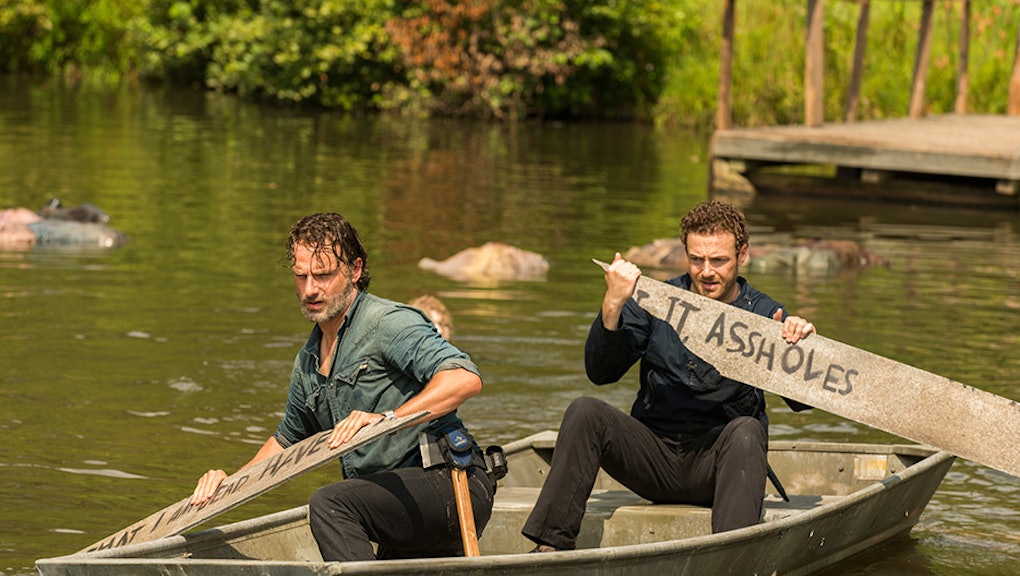 The Walking Dead deserves some credit: It ended season seven on a strong note with a midseason finale that showed some guts (literally) and finally put Rick and the group in a position to fight against Negan. The problem is, by the time they got there, the fanbase had steadily slipped away in the ratings, and the season as a whole has been a boring slog.

If the series wants to carry any positive momentum going into the second half of season seven — we'll just refer to it as 7B to make things simpler — it has to make a few important changes, while not succumbing to old narrative tricks.

Here's four things the show can do right away to get things back on track.

Flesh out Negan so that he's more than a monologue machine

The introduction of Negan and the Saviors was supposed to ignite the show, giving it the first tangible villain since the Governor. It looked good on paper — and Jeffrey Dean Morgan was an ideal casting — but the end result has been frustratingly one-dimensional.

Negan spews out lines about his affection for his baseball bat Lucille and his fondness for rules; he loves rules, and they must be followed. He's become a caricature of himself, and is a big reason why season seven has struggled mightily, in spite of Morgan's charisma. The solution is simple: give the character some nuance.

The Walking Dead comic book creator Robert Kirkman has provided a backstory for Negan, one that reveals he used to have a wife. Guess what? Her name was Lucille. That doesn't mean the show needs to devote an entire episode to his backstory. (Remember how bad and boring the two Governor-centric episodes were?) However, any semblance of character development — compelling villains need them, too — would go a long way.

Surprise the fans, and diverge a bit from the comics

Anybody familiar with the comics knows where the rest of the season is heading: the "All Out War," in which Alexandria, Hilltop and the Kingdom go up against Negan and the Saviors. That's not a bad storyline to emulate; in fact, it's one of the best runs the comics have had thus far. But for the show to follow it comes with the cost of being quite predictable.

There have been several moments in season seven that could be telegraphed, episodes ahead. Fans of the comics knew Maggie would assume a leadership role at Hilltop, and that Negan would find out if Spencer had any guts. The earlier seasons of The Walking Dead worked, in part, because they weren't afraid to diverge a bit from the comics.

It is in these moments the show creates a necessary aura of suspense — this is a show about zombies, after all — in which few people see the twists coming. If you read the comics, you know where "All Out War" is headed, and what it'll mean for Negan and the Saviors. But what if The Walking Dead pulled the rug from under its comic book fans, and took a major left turn?

AMC has already been teasing the next villainous threat, the Whisperers, which is a bit premature for the comics' standards since they aren't supposed to show up until after a brief time jump, after "All Out War." The network could always throw them in early, and give Rick and the group two huge threats simultaneously. That's just one example, but The Walking Dead needs to find a deft balance between its source material and the unpredictable.

Not every episode needs to extend the usual run time

AMC afforded The Walking Dead the freedom of extended episodes in season seven — lots of them, many of which were unnecessary and strenuous (case in point: a 70-minute episode devoted to Tara). The overstuffed episodes have been primarily dedicated to world-building, but it can similarly be attributed to the season's sluggish pace.

Akin to Mr. Robot's second season over on USA, which also had several lengthy episodes, The Walking Dead had too much creative freedom from its network. It didn't use the extended time for anything substantive; instead, it led to more complaints about endless commercials from viewers on Twitter. There are exceptions, to be sure — the finales, for better or worse, are typically 90-minute affairs.

However, episodes at roughly 40 to 45 minutes as the standard in the rest of season seven could, in theory, force the show to pick up the pace, while also narrowing its scope.

For the love of God, don't do any more cliffhangers

If viewers of season seven's midseason finale weren't aware of its extended run time, then the sight of the show fading to black as Rosita fired a bullet in Negan's direction around the hour mark would've been unbearable.

Thankfully, The Walking Dead has learned its lesson, and it avoided a midseason cliffhanger after the disaster that was Glenn and the dumpster, followed by Negan and his game of eeny, meeny, miny, moe (whose head will I bash in with a baseball bat?) in the season six finale. That's all well and good, but it's hardly a reason for showrunner Scott Gimple to become complacent — congratulations, you didn't fuck up for the first time in a while!

The Walking Dead has always felt like it's following in the footsteps of Game of Thrones, a fantasy series that draws tons of viewers and achieves critical acclaim (The Walking Dead can no longer claim the latter). But the show should take notes from another HBO fantasy series, Westworld. Westworld's first season was an open and closed narrative, and its finale answered the fans' biggest questions whilst leaving season two up in the air.

That was a satisfying send-off ahead of its hiatus. If The Walking Dead can cap off season seven with a similar touch, then the show could be well on its way to becoming a decent, and watchable, television drama once more.