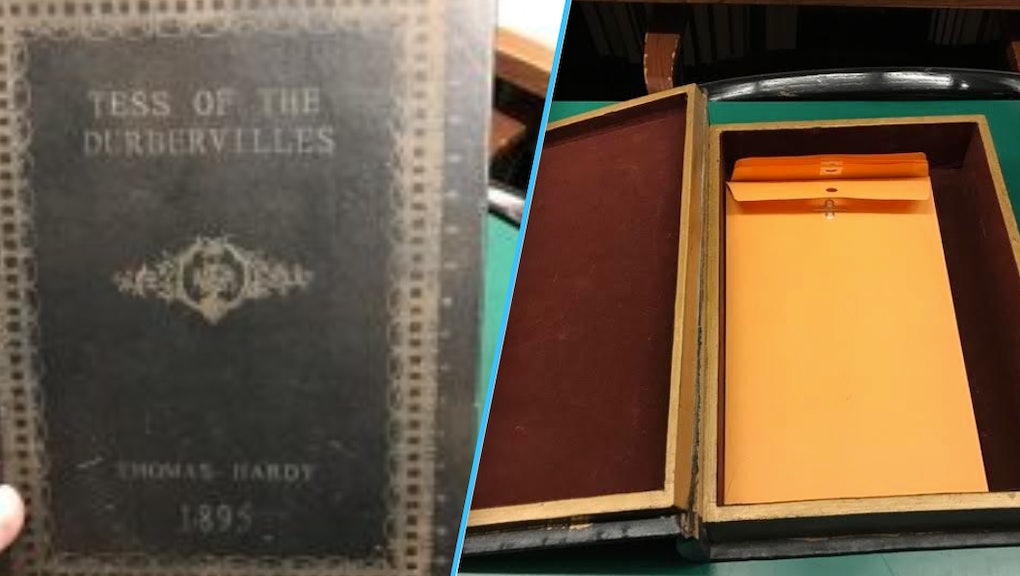 Is there a secret neo-Nazi club at one of the nation's most prestigious universities? Or are these hidden documents just part of an elaborate troll meant to further agitate a community that's already on edge?

A student worker at a Columbia University library allegedly came across what appeared to be a copy of Thomas Hardy's Tess of the d'Urbervilles — but when they cracked it open, the book was hollowed out, according to a report from Bwog, an independent student news site, published Monday.

Bwog did not reveal the name of the student worker who allegedly discovered the hidden documents, nor did they reveal the date or specific location of the materials' apparent hiding space.

But the story included photographs of the papers that were reportedly buried inside the book, marked by what appeared to be an image of a Nazi eagle — which the Anti-Defamation League includes in its Hate Symbol Database — on the cover of an alleged "recruitment form."

Photographs of the supposed recruitment materials showed a "Topics Interested In" section that included among the options: "Post-Democracy," Nationalism," "HBD," "Alternative Right," "Cultural Marxism," "'The Cathedral,'" "Economic Systems" and "Other."

The documents were signed "DarkEn" on the back — an apparent reference to the Dark Enlightenment, a reactionary online community that Vocativ called "the creepy internet movement you'd better take seriously."

The man who allegedly helped inspire the DE's anti-democracy, neo-fascist philosophies is Curtis Yarvin, who went by Mencius Moldbug online. "The Cathedral," mentioned in the alleged recruiting materials found in the Columbia library, is a Dark Enlightenment term that criticizes universities and media as the systems that perpetuate liberal progressivism.

"HBD" may refer to "human biodiversity," a racist pseudo-science that is part of DE's worldview. As Vocativ put it, the movement's adherents are "creepily obsessed with statistics that demonstrate IQ differences between the races."

According to Bwog, the group may also be responsible for posters asking "Are You Politically Incorrect? We Are" that reportedly appeared in men's bathrooms on campus this past September. The posters, which had the words "The Dark Enlightenment Club" along the top, encouraged interested parties to reach out to the group via a messenger app.

But the question remains: Is there actually a secret neo-fascist club recruiting via hollowed-out books on Columbia's campus — or is the book, and perhaps even the "accidental discovery" of the materials by a student worker, just part of a sinister, elaborate troll meant to unsettle students?

When reached for comment, a representative for the university said via email that the school is looking into the matter: "We are aware of the student blog report about a hollowed-out book discovered in Butler Library containing disturbing materials. We are investigating the matter, but at this point cannot confirm the published account."