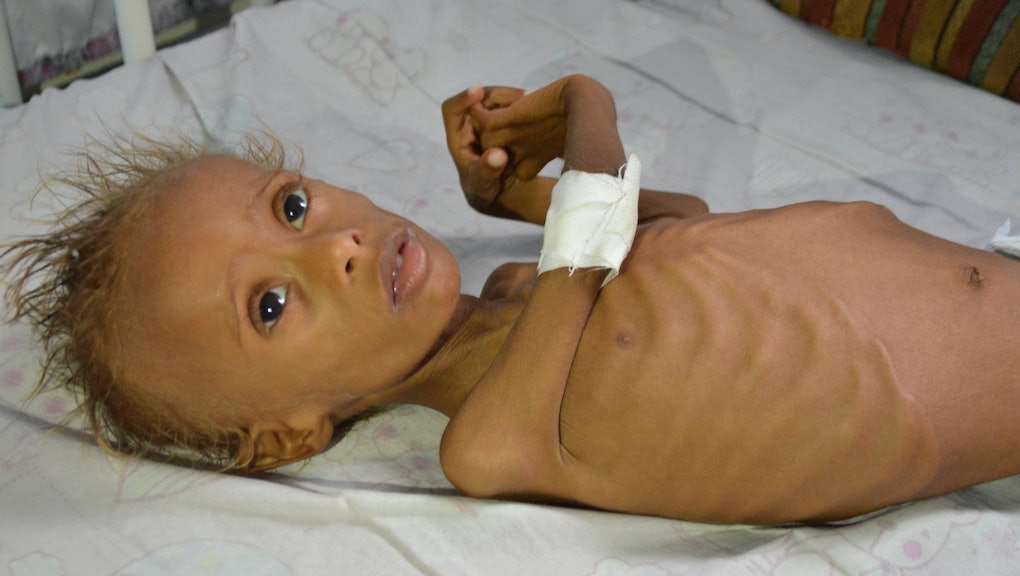 A child in Yemen dies of malnutrition every 10 minutes, according to UNICEF

According to a recent report by the U.N. children's fund UNICEF, over 400,000 children in Yemen are in danger of starvation — a child dying of malnutrition and its effects every 10 minutes. Additionally, almost 2.2 million children in the country are in need of immediate care.

Based on current figures, 462,000 children in Yemen currently suffer from severe acute malnutrition, which has reached an unprecedented high in the country. These numbers have actually increased by nearly 200% since 2014.

According to the UNICEF website, "Children with severe acute malnutrition have very low weight for their height and severe muscle wasting." These children often become stunted — shorter than they should be at their age — which can affect their physical and mental health for years to come. Children who suffer from severe acute malnutrition need immediate treatment, and even if they survive, can experience a number of irrevocable effects.

In a statement reported by Al Jazeera, Meritxell Relano, UNICEF's acting representative, said, "The state of health of children in the Middle East's poorest country has never been as catastrophic as it is today."

What is happening in Yemen?

Today, Yemen is the sight of national destruction and devastation due to a sectarian proxy war between Sunni Saudi Arabia and Shiite Iran, as Mic previously reported. Saudi Arabia backs the Yemeni government while Iran supports the Shiite Houthi rebels.

The war has taken an overwhelming toll on the country, as people have been driven from their homes by repeated airstrikes that have leveled buildings and killed more than 10,000 civilians, according to Al Jazeera. This has also led to the ruination of Yemen's health care system, which is on the brink of collapse.

UNICEF has tried time and again to help people understand the severity of the situation in Yemen through the eyes of its children. Earlier this year, for example, a 12-year-old boy named Abdullah took pictures of his home and the destruction that has occurred there, which UNICEF shared in order to help the world see the price all Yemenis, young and old, are paying for this war.