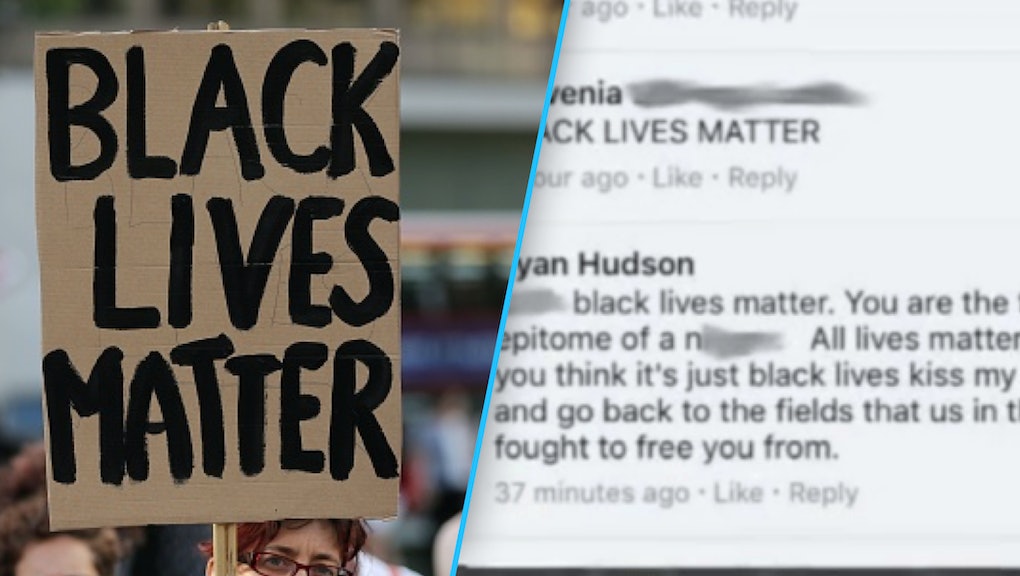 It's Tuesday — or just another day someone loses their job for saying something racist on social media.

The verbal spat began when a black woman noted her support for Kaepernick's kneeling protest during the national anthem, according to Fox 17. It took only three words — "Black Lives Matter" — in her comment to send Hudson into a racially insensitive rage.

"You are the true epitome of a nigger," Hudson reportedly wrote in response to the woman's comment. "All lives matter. And if you think it's just black lives kiss my ass bitch and go back to the fields that us in the north fought to free you from."

The woman told the Root that Hudson initially said his account was hacked, but then later claimed he was drunk during the incident.

"He's now claiming he was drunk. First he was hacked, now he's drunk," the woman said.

The woman posted screenshots of the comments, prompting the attention of Belding Fire Chief Greg Moore, and eventually led him to firing Hudson. Hudson worked for the fire department for nearly one year.

"I've actually never had to fire someone," Moore told Fox 17. "This is a first. My employees are excellent employees, and I've had nothing but the utmost respect for all of them. They do what they are supposed to do, and this is so out of the ordinary for a firefighter to do."

"We don't know it would have changed him from doing his job," Moore added. "But what are you going to do? We can't take the chance. We have to treat everybody no matter what and we want that to happen."

The Belding Fire Department did not yet respond to Mic's request for comment.