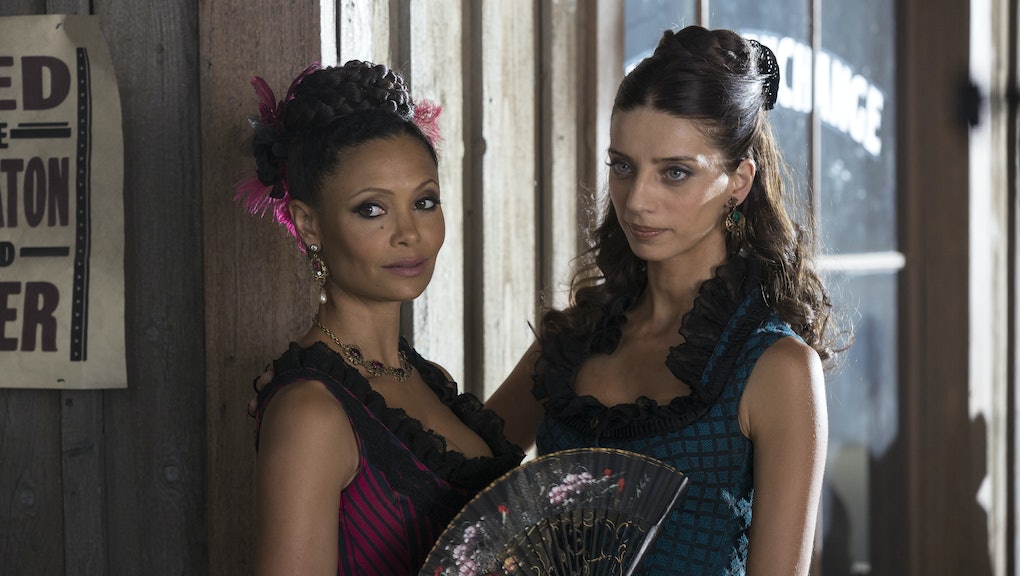 What our violent obsession with sex robots reveals about us

If you want to sleep with a robot, you don't have to wait decades for a Westworld-style theme park of carnal delights. The future of virtual sex is already here.

Strap on enough hardware, and the avatar of your dreams will grind to the beat of your teledildonics. Today's smart dolls are becoming increasingly lifelike — nowhere near the humanoid sex workers in Maeve's Westworld brothel, but looking and acting more and more realistic, even simulating love. Soon, humans won't need to hop on a train to do whatever they wish to a complacent fembot — they can just stroll down to their basement.

Westworld, whose eponymous park encourages consequence-free rape and murder, only hints at the psychological and ethical consequences of abusing androids. But it's a question we should take seriously. While Westworld focuses on the consequences of abuse on robot sentience specifically, some experts say we humans could experience something even more dire in the process — the loss of our empathy.

When a man strangles, stabs and rapes a humanoid woman, how will he treat the woman he goes home to? Does our humanity suffer when we're inhumane to machines?

What kind of person would want to assault a sex doll?

When I asked experts across ethics, robotics and computer science if it's possible to rape a robot, and if programmed consent counts as consent at all, they seemed more concerned with what raping and killing a robot would do to us humans.

Basically, if you'd go "black hat" on Westworld, you might already be a sociopath.

"Normal people would find it very hard to shoot a Westworld creature," said David Pizarro, an associate professor of psychology at Cornell University. "It seems like you have to be a sociopath to have to do the things they show the people doing to the robots in Westworld." Sociopaths are often identified by their difficulty forming connections with other people.

When a man strangles, stabs and rapes a humanoid woman, how will he treat the woman he goes home to? Does our humanity suffer when we're inhumane to machines?

There has been little research on how the normalization of sex with humanoid robots that are equipped with artificial intelligence might impact our own relationships.

Pizarro suggested the kind of guy who'd abuse a sex robot "might actually be a very different guy already. ... There's no lack of male disrespect toward women already, and those might be the men who are most drawn to sex robots."

When Matt McMullen, CEO of RealDoll — a company aiming to release sex dolls equipped with artificial intelligence in 2017 — was asked what he saw as the company's direct competition, he responded with: "the human female."

"When you say that your competition is a human female, you are saying, 'Here is someone who will do your bidding, follow your every whim, let you fuck her any which way you want to Sunday, and you don't have to engage with a real person in any way at all,'" Gallop said. "And that's appalling."

"Here is someone who will do your bidding, follow your every whim, let you fuck her any which way you want to Sunday, and you don't have to engage with a real person in any way at all." — Cindy Gallop

Sinziana Gutiu, a Canadian lawyer focusing on human rights, privacy and human-computer interaction, calls it the "roboticization of consent" — the concept of a humanoid robot with artificial intelligence, used by humans for sex.

"I believe that the 'roboticization of consent' is fundamentally at odds with our social and legal commitment to equality and risks diminishing the importance of consent between humans," Gutiu told Mic.

She said in the context of male users and robots designed in a woman's image, these sexual encounters "replicate existing gender inequalities and stereotypes about women's value in society, and promote the idea that women are sexual objects used to gratify male sexual desires."

Could robots ever affect how we define rape?

Patrick Lin, an associate professor of philosophy and director of the ethics and emerging sciences group at California Polytechnic State University, echoes Gutiu's sentiment. Lin notes that emerging technologies challenge traditions and norms, citing privacy, free speech, due process and responsibility — and it "shouldn't be surprising" if they also challenge what counts as rape.

"So, an action could be wrong not only because it causes harms or violates rights, but also because it expresses bad character or immoral behavior," Lin said.

It's not just about whether or not the sex robots can achieve sentience, or even if the robot can experience anything at all. It's about what establishing this dominance over predominantly female-presenting robots says about us. The desire to dominate a human-like piece of hardware speaks to our morals.

Sex robots are almost exclusively female — and it's a big problem

That is likely because not only is the tech industry dominated by men, but also because companies founded by men are more likely to get funding.

She added that when these products begin to operate at scale, that can have "very profound effects on humanity."

But while robots might offer certain individuals a gateway to better understanding and human intimacy, Pizarro doesn't see smart sex dolls as a healthy outlet for individuals with violent tendencies.

Could assaulting a sex doll be a cathartic release of aggression for some abusers, saving actual human beings from violent acts? Probably not.

"In general, there is not very good evidence for the view that catharsis works for aggression," Pizarro said. "It's pretty much the case that as soon as people started testing the hypothesis that 'venting' your aggression would reduce it, they found that not only does it not actually reduce it, it often fans the flames and makes people behave even more aggressively."

Plus, someone who takes out their violent urges and sexual aggression on a lifelike robot might just be practicing assault. So actually, there's "reason to think that it might increase the chances that they would act this way toward actual human beings," Pizarro said.

"We don't know what direction this goes in"

Pizarro says we should prepare for the downsides of a society that uncritically embraces sex dolls.

"I think we know enough about human psychology that if you can get yourself to mistreat a very lifelike, human-like thing, then it's probably just good rehearsal to doing that to a real human."

There aren't enough experiments yet to show the long-term effects of normalizing and encouraging sexual behavior with humanoid robots. Pizarro said that if we really want to know if this behavior causes callousness toward women, we'll need real scientific experiments.

But Pizarro said we can look at video games and violence for some insight into the potential effects. The military used virtual simulations to desensitize soldiers to the act of killing. Mental health professionals used them to treat soldiers with PTSD. But do violent video games cause players to act out violence in real life? That's still up for debate.

When I spoke with Kate Darling, a research specialist at MIT Media Lab, she raised more questions we don't yet know the answers to.

"Humanoid robots are muddled with living things in our subconscious, so what if this [relationship] ultimately normalizes and encourages sexual behavior towards humans?" Darling said. She also posed the question of whether using robots to vent one's anger could improve behavior toward other humans.

Put simply, "we don't know what direction this goes in," she said.

In the meantime, a suggestion: The "do unto others" adage applies to all — humans and humanoids alike.