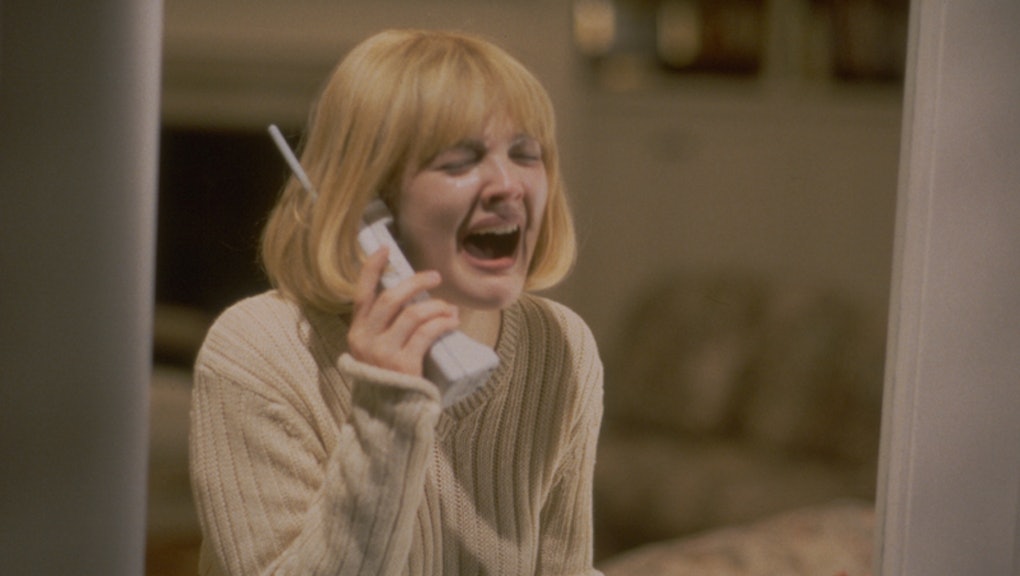 On Dec. 20, 1996, Scream was released, instantly giving the world a new answer to the film's iconic question: "What's your favorite scary movie?"

Scream was a box-office and critical success upon release, spawning a sequel the following year, third and fourth films and finally, a television series. It even gave horror filmmaker Wes Craven's career a second life.

The significance of Scream is still felt 20 years after its release. It breathed new life into the slasher genre, paving the way for movies like I Know What You Did Last Summer, Urban Legend and Final Destination. Its influence is even evident in more recent horror movies like Cabin In The Woods and You're Next. Point being: Modern horror owes much to the existence to Scream.

On the one-year anniversary of her mother's death, Sidney Prescott, played by Neve Campbell, and her friends are taunted by a killer in a white mask named Ghostface. The unknown killer haunted and hunted them by asking the victims horror movie trivia over the phone, ultimately picking the people of their town of Woodsboro off one by one.

The late Craven, mastermind behind other horror classics like The Last House on the Left, The Hills Have Eyes and A Nightmare on Elm Street, assembled an all-star cast definitive of the '90s: Neve Campbell, Courteney Cox, Skeet Ulrich, Rose McGowan, David Arquette, Matthew Lillard, Jamie Kennedy and Drew Barrymore. (Campbell, Cox and Arquette became mainstays of the franchise.)

Scream was an immediate success. Even though the slasher was released the weekend before Christmas, it had legs at the box office. The film earned over $6 million in its opening weekend, but had huge momentum, earning over $9 million in its second weekend and over $10 million in its third — a feat of increase that doesn't happen much anymore. The film went on to gross a total of $173 million at the worldwide box-office — all on a budget of $14 million.

In addition to scaring audiences, Craven's film earned praise from critics. Entertainment Weekly's Owen Gleiberman's original review of the film says it all: "Poised on the knife edge between parody and homage, Scream is a deft, funny, shrewdly unsettling tribute to the genre."

When we talk about what makes Scream signature, however, we can't fail to talk about its opening sequence. Casey, played by Drew Barrymore in a legendary wig and white cashmere sweater, is home alone and about to watch a scary movie when the phone rings and things take a turn.

She is Ghostface's first victim, killed within the first 10 minutes of the movie. Barrymore was the biggest name in the cast, so it was shocking to see her picked off right away. The opening scene set the tone for the rest of the film: Scream wasn't playing by the rules. It successfully satirized the cliches and tropes of the horror genre, while still being legitimately thrilling.

Scream's runaway success meant a sequel was on its way: Scream 2 came out in December of 1997 and it broke the rules again. The follow-up satirized the rules of sequels: This time, Ghostface was doubling up on the kills from the first movie and trying to make a sequel. "By definition alone, they're inferior films," Randy says in Scream 2. Things were about to get really meta. Scream 2 really did break the rules of a sequel, as it was a box-office and critical success.

Scream 3 followed in 2000, and unfortunately, it's the one entry in the franchise that is a legitimate mess. For example, just look at Courteney Cox's bangs. It's a movie within a movie, and it's too meta even for Scream. The film's box office showed signs the franchise was wearing thin.

Scream 4 was released 11 years later, to unfortunately mixed reviews and a steep decline in box office from the previous entries, barely earning $40 million domestically. Yet the film isn't without its pleasures, satirizing horror remakes and reboots and giving us the memorable Jill Roberts, played by Emma Roberts. Jill introduced yet another twist in the franchise — the jealous relative who would do anything to gain the same fame Sidney Prescott had after surviving the first murders all those years ago.

Twenty years after Scream's release, the film's effect can still be felt within in the horror genre. Said genre is always reinventing itself, attempting new ways at tackling conventions. Modern horror movies like Cabin In The Woods, You're Next and Drag Me To Hell owe much of their style and genre-deconstruction to Craven.

For example, You're Next is a perfect blend of horror and comedy that put a spin on the genre and gave us a kick-ass final girl in Erin, played by Sharni Vinson, that Sidney Prescott would be proud of. The Cabin In The Woods is a sharply funny, thrilling, self-aware and very meta ride, and Drag Me To Hell is camp-horror done right.

Scream made it okay for horror movies to be smart, scary and funny all at the same time. It inspired a new generation of slasher movies and paved the way for recent horror films. And it all started with one phone call.