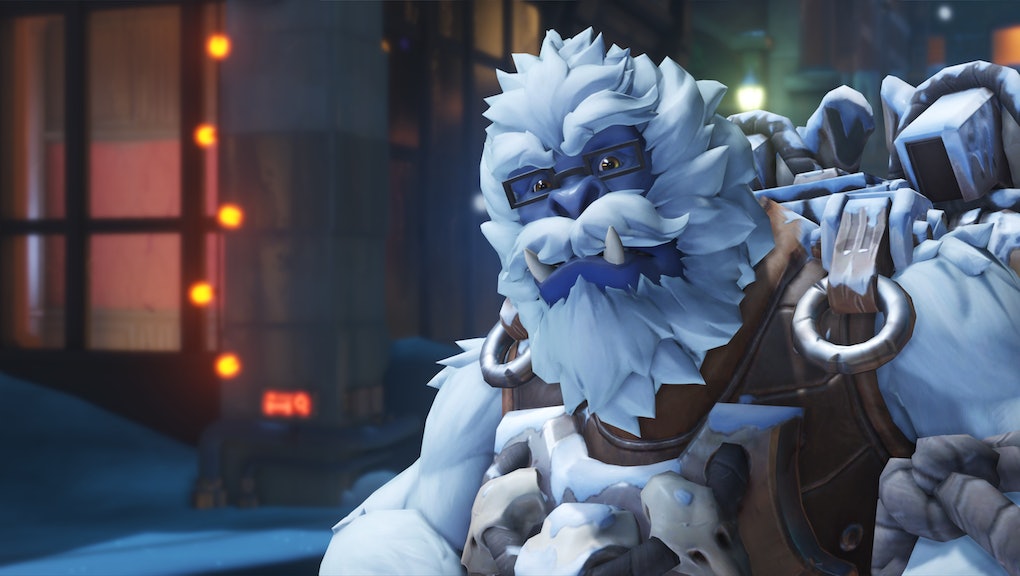 Now that everyone finally has their hands on Overwatch's new Winter Wonderland update, it's time to take a break from pelting each other with snowballs and have a look at all the cool details and pop culture references players have found lurking in the new skins, emotes, sprays and maps.

1. The intro screen shows Tracer, Torbjörn, Lúcio and Mei looking festive and cheery, but did you notice Scrooge McCree being a total creep in the background?

3. Yes, Zarya's "Frosted" skin is pretty boring, but if you scrolled past it quickly in disappointment, you probably didn't notice it makes her gun fluorescent pink.

4. Like Zarya's "Frosted" skin, it's easy to glance at Mei's Santa-themed outfit and think there isn't much to it. However, when you use her Cryo Freeze ability with the new skin equipped, something pretty fantastic happens.

5. According to Reddit user reyt_nice, when you have Winston's "Yeti" skin equipped on the Nepal map, he'll say "Welcome to the Himalayas" — a reference to the Abominable Snowman character from Monsters, Inc.

6. If you take a look at Roadhog's gun with the "Rudolph" skin equipped, you'll see a tag on it that shows it was a gift from Junkrat.

8. You can use the new ornament-style sprays to decorate the Christmas trees in the spawn rooms on Hanamura and King's Row.

9. Pharah and Reinhardt's ice fishing sprays interact with each other, which is sure to fire up the conspiracy theorists who think Reinhardt could be Pharah's father.

10. Similarly, Junkrat's and Roadhog's summery — because, you know, they're from the southern hemisphere — Christmas sprays interact.

11. According to Reddit user Ueseul, Genji's ornament spray references the fact that he had to be brought back from the brink of death with cybernetic enhancements. Specifically, the way his kimono is folded — right over left — is traditionally reserved for dressing the dead for burial.

For more on Overwatch, check out the full patch notes for update 2.01, read our guide to checking your Overwatch stats, look at our list of the best gender-bent Overwatch cosplay, read the story of how a bunch of Redditors got an unexpected Arabic lesson after debating Bastion's gender and read up on the new Oasis map on the PTR.