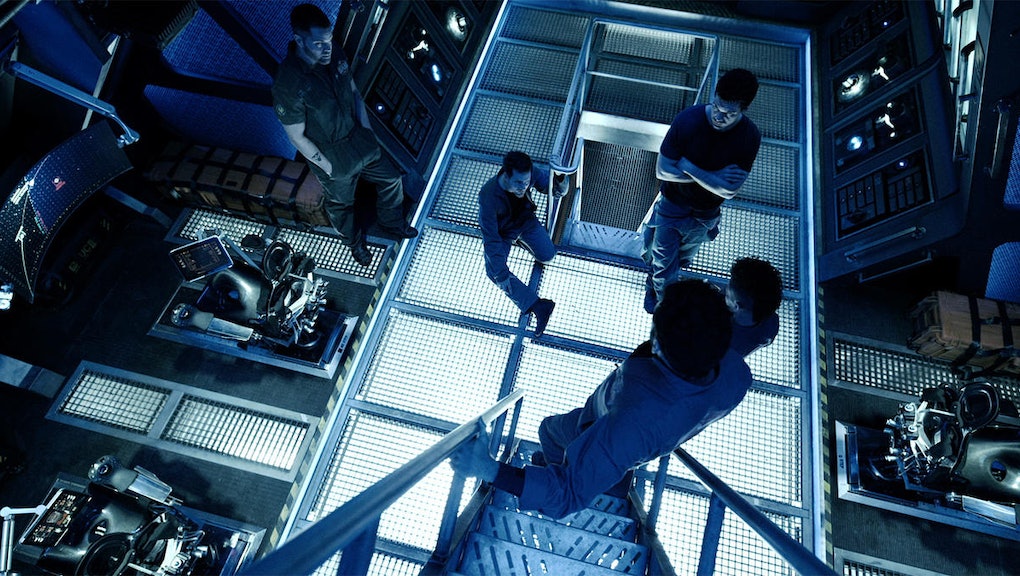 Syfy's 'The Expanse' was the most surprising show of 2016

Prior to 2016, any hype surrounding a new television series on Syfy would be met with, at best, cautious optimism. The network has burned sci-fi lovers before, having failed to string together a compelling show since Battlestar Galactica, which, in the Golden Age of Television 2.0, is a fond-but-distant memory.

Case in point: The network's 2014 series Helix began with an interesting, zombielike premise set in an arctic wasteland strung together neatly over a few episodes. Then, it succumbed to a chain of dubious narrative turns that revealed the ultimate villain is, essentially, a group of immortal Illuminati figures with silver eyes. Helix was canceled after two seasons.

Suffice it to say, we headed into Syfy's newest critically acclaimed series, The Expanse, with low expectations. After its first season, however, it's clear that The Expanse is more than a decent show: It's the best science fiction series since Battlestar Galactica, and the most surprising show of 2016.

Here are four key reasons why.

Strong material to adapt from isn't always a signal of good television (The Walking Dead is following its comics more closely than ever, and it's hit rock bottom), but The Expanse has strong building blocks to work off of in the book series by James S.A. Corey. Yet smartly, they don't follow the books to a T.

In the books, for instance, the storyline on Earth with Chrisjen Avasarala (Shohreh Aghdashloo) isn't introduced until the second book. The Expanse show, however, brings the character in from the get-go, offering a clearer view of what mankind is up to 200 years in the future: We have warring colonies on Mars, the asteroid belt and beyond, along with the political drama on Earth.

It's also a promising sign that The Expanse has a bit of wiggle room when it comes to adapting from the books. The novels aren't finished, which could eventually put Syfy in the precarious situation of continuing a story without its source material. But Game of Thrones' sixth season was primarily new material, and it was very good. So we'll give them the benefit of the doubt.

It has some Game of Thrones-style twists — and they work.

In what we'll call the age of headless Ned Stark, genuinely surprising plot twists are exceedingly difficult to execute on television, which has subsequently led to more TV series excitedly killing off major characters. The Expanse is certainly guilty of the latter.

However, it subverts your expectations of who will be the series' protagonists in its pilot so effectively that indeed, it is quite shocking. At the onset, you're following a group of characters on the Canterbury, a commercial ice hauling ship whose crew comes across a mysterious distress signal. A few characters from the crew, some of whom barely know one another, investigate the source of the signal before the Canterbury — and a few characters you're introduced to, including its captain — is destroyed by an unknown ship.

The Expanse keeps viewers in a similar state of unease by killing off other characters one might deem crucial to the plot — though in the latter half of season one it does settle in to a core group of protagonists (mostly, the survivors of the Canterbury). But whereas the first half of the season is chaotic, the second narrows in scope and answers some of the season's longstanding questions, including the reason behind the mysterious distress signal that kickstarted the plot in the first place.

Most importantly, there's never a point in The Expanse where the twists feel gimmicky at the expense of the viewer (take note, Walking Dead).

It mixes in a few genres, to surprisingly good effect.

If one were to fast-forward through an episode of The Expanse, you'd be treated to three stories that feel completely disparate. There are political machinations on Earth that feel akin to an intergalactic House of Cards; a noir-crime thriller with a detective, Joe Miller (Thomas Jane), in a tacky hat solving a missing person case; and a space opera with a ragtag group of survivors meandering through the vast expanse (get it?) of space.

It sounds like too much on the surface, but The Expanse makes it work in a way that's reminiscent to the early seasons of Battlestar Galactica, in which characters were spread throughout the universe as part of a single story. Like Battlestar Galactica, The Expanse does eventually bring some of these characters together — Miller and the Canterbury survivors — by the end of the season.

It's not a surprise to learn that these stories, and characters, will eventually become intertwined. What is unexpected is how The Expanse pulls it off: Miller coming face-to-face with the Canterbury survivors in the show's thrilling eighth episode. Geographically, it's kind of insane — Miller has to leave the station he works on to fly to another part of the Belt, while the Canterbury survivors are drawn to the same station, and the same hotel, at the same time.

Again, this is a Syfy series, so recent history would suggest that this is where the show shoots itself in the foot. However, the chaotic meetup is when the first pieces of a convoluted puzzle fall into place, explaining how Miller's missing person, Julie Mao, sent the distress signal, why the Canterbury was destroyed and what happened to Julie are all intertwined. It makes sense — and it works, making the final three episodes of season one some of the most thrilling on television this year.

The Expanse's themes are very relevant in 2016.

Broadly, The Expanse is the television equivalent of Arrival, in that its themes feel more relevant than ever in 2016. Arrival reminds us of the importance of human communication at a time when the country is increasingly divided, while The Expanse takes on a more cynical tone.

In a future, 200 years from now, where human beings have the means to live and travel across space, and mine important resources from areas like our asteroid belts, literal world powers will still be at each others throats while simultaneously screwing over the disenfranchised. To Bernie Sanders, this would be sardonic, dystopian horror fare.

Syfy hit a massive home run with The Expanse. It's galactic world-building at its finest, with strong source material as its backbone, and is must-watch television for sci-fi buffs and casual viewers alike.

There's also good news for those who couldn't catch the show when it aired: It's available to stream on Netflix (for international users) and Amazon Prime, just in time to catch up before season two premieres Feb. 1.