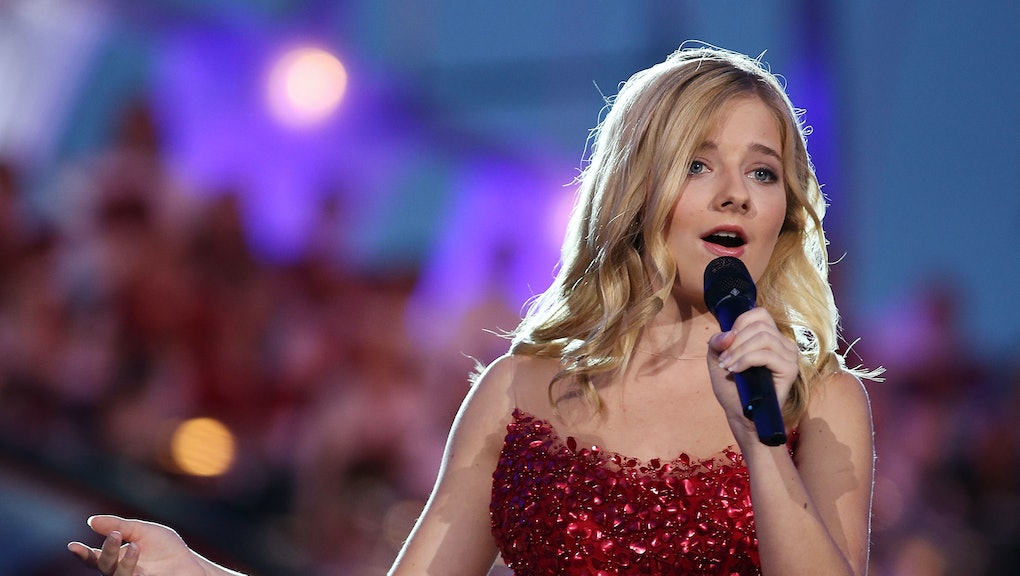 Who is Jackie Evancho? The singer announced for Donald Trump's inauguration

After nearly the whole of the music world (except Ted Nugent) turns against you, it's likely difficult to find a big-name singer to wow audiences at your inauguration. But after a reported false start trying to land Elton John, Donald Trump has finally found someone to sing him in: former America's Got Talent second place winner, Jackie Evancho.

"I have recently been asked by the president-elect to perform the national anthem for the swearing-in ceremony at the inauguration," Evancho said Wednesday on the Today show, according to Billboard. "I'm so excited. It's going to be awesome."

Boris Epshteyn, director of communications for the Presidential Inaugural Committee, was also thrilled to have Evancho on board.

"We're delighted to have Jackie Evancho performing the national anthem at the 58th Presidential Inaugural Ceremony," said Epshteyn, CBS reported. "As the youngest solo artist to ever go platinum, she is a true role model and inspiration for people young and old in our country and around the globe. Jackie represents the best and the brightest of America."

The rest of the country didn't exactly mirror their enthusiasm. The resounding social media response was more along the lines of, "Who's Jackie Evancho?"

So, who's Jackie Evancho?

Evancho's big break came in 2010 when she was 10 years old, appearing on America's Got Talent. She chose big operatic songs, such as Puccini's "O mio babbino caro" and "Pie Jesu" from Andrew Lloyd Webber's Requiem.

Her performances were not without their share of controversy. Accusations of lip synching plagued her early performances. The response was so vehement, Howie Mandel had to ask her to prove she could actually sing the way she appeared to impromptu.

She ended up losing that season to another singer, Michael Grimm, who remains one of the show's most successful acts.

What has Jackie Evancho been up to since America's Got Talent?

Now 16, Evancho has released a string of albums, including several Christmas collections and an album of Disney, film and show tune covers.

She recently dabbled in pop, releasing a single in April called "Apocalypse." It's a simple piano-driven heartbreak ballad with a strong faith component: "I thank God you found me," Evancho sings on the track. "And God knows how I let you go."

"To me, there's really no limits to what I can do right now, because I really just want to see what's best for me," she told Billboard when premiering the single. "So I can't just put myself in one spot."

Lending her name to this divisive election does seem a potential limit to her ability to move through the music industry with complete freedom. However, she won't be shouldering the burden alone. TMZ has confirmed that Andrea Bocelli, the blind Italian opera singer, will join Evancho onstage. They'll be singing a duet.

Two singers who could not vote in the 2016 U.S. election will be singing on behalf of a candidate neither had to really consider as a potential leader. What fun 2017 will be.