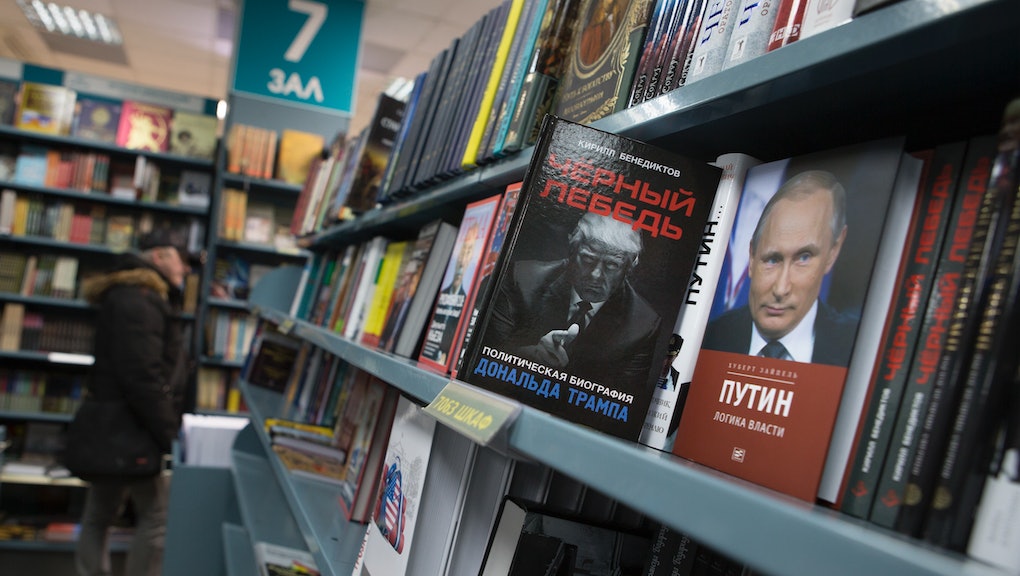 Donald Trump and Vladimir Putin: Global chess match between Russia and the president-elect

NBC News reported Wednesday that Vladimir Putin had a personal hand in directing how information hacked by Russian operatives was leaked to influence the election. The news was the latest in a string of revelations pointing toward Russian interference in the election. This detail comes as President-elect Donald Trump continues to show a friendlier posture toward Putin by refusing to specifically acknowledge the alleged interference — and nominating a certified friend of Russia for secretary of state.

In Politico, two homeland security experts detail how Moscow uses a combination of disinformation, volume, social media attacks and targeted posts online to influence the outcome of elections. The all-of-the-above approach to digital attacks, by thousands of pro-Russian operatives, swarms the internet to convince voters on the margin to follow a purportedly Putin-determined course of action — in this case, electing Trump.

Meanwhile, Trump is still questioning whether the Russians had any role in hacking during the election. From his Twitter feed Thursday morning: "If Russia, or some other entity, was hacking, why did the White House wait so long to act? Why did they only complain after Hillary lost?"

This is Mic's daily read on Donald Trump's America — and how it affects you. Welcome to America's only political newsletter that lives for Trump's compliments toward the tech community. Except that we just did. And we'll do it a few more times too. But don't let it distract you!

Even More: Trump's cabinet announcements are nearing an end, with only three to go.

Where's Trump? Trump Tower in New York, then Hershey, Pennsylvania, for a "Thank You" tour rally.

"There's nobody like the people in this room," Trump tells tech leaders

The much-hyped meeting between Trump and the leaders of Silicon Valley was largely uneventful. Tech leaders expressed their views on immigration, education and trade policy to the president-elect. And with the media in the room, Trump made clear that he was "here to help" the booming American technology sector thrive. (New York Times)

Given the opposition to Trump some tech executives voiced during the campaign, the relaxed tone of the meeting was not guaranteed. And while Trump's team said the discussion out of the meeting was substantive, Recode executive editor Kara Swisher said it was little more than a "large photo op."

Something to note: A full 20% of the room consisted of Trump family members, which drew widespread derision from pundits and the media. Trump recently announced his sons Don Jr. and Eric will take control of his businesses before he enters the White House. It seems odd, then, that those two, along with Ivanka, would sit in on their father's meeting with tech leaders in his role as president-elect. Because Don Jr. and Eric will continue to run the family business, this photo op continues to hurt Trump's credibility when he says his administration will have no conflicts of interest.

Another Thursday tweet from Trump on this note: "The media tries so hard to make my move to the White House, as it pertains to my business, so complex - when actually it isn't!"

"What happens if the electoral college change their vote," "Electoral college Russia," "An electoral college coup." These are all rising search queries on Google, suggesting Americans have heightened interest in the potential of presidential electors blocking Trump's entrance to the White House. On Monday, electors will meet across the country to cast their votes for the next president. Some reports say 20 or more Republican electors — not legally bound to back Trump — are considering switching their votes. Someone is even buying full-page newspaper ads to pressure electors to "vote their conscience."

These reports of electors jumping ship are likely untrue. An Associated Press survey published Thursday found little support for defection among more than three dozen GOP electors. Even if enough electors defected to keep Trump from 270 electoral votes, the election would move to the Republican-controlled House — and Trump would likely still be elected. (Mic)

— A new poll shows Russia's alleged involvement in trying to sway the U.S. election might not be a political liability for Trump: Surveyed Republicans have recently taken a more positive view of Vladimir Putin and Wikileaks. And, since 2014, GOP voters have moved 56 percentage points in favor of Putin. (Washington Post)

— Time rounded up some views on Rex Tillerson from environmentalists and climate change activists. While Trump's secretary of state nominee accepts that humans contribute to climate change, his record is still viewed very unfavorably by green groups. (Time)

— A Muslim woman from New York who said she was attacked by Trump supporters has been arrested for filing a false police report. (Washington Post)

The loyal opposition: How millennials are coping with Trump

A new survey of 2016 voters found that efforts to make voting more difficult disproportionately affected minority and younger Americans. Nearly 1 in 4 millennials polled had to cast a provisional ballot — way more than the 6% for Baby Boomers. (Mic) And compared to white Americans, larger percentages of minority voters reported wanting to vote but being unable to.

So with many millennials frustrated by the outcome of the election, partially because of obstacles around voting, Mic's Celeste Katz went to Nashville, Tennesee, to find out how younger Americans are coping with Trump's victory. The answer? They're running for office. At the Arena Summit, Katz spoke with millennials who will not stay on the sidelines as Trump and his supporters move to implement their agenda in Washington. "Despite opposition research, despite people making up stuff about you, despite people telling the truth about you, the question is really, 'If you don't run and you have the skills, the passion and the ability, what happens to the people that you claim to care about?'" said a 26-year-old mayor from California.

Bonus: Mic is sharing ways activists around the country plan to fight back against Trump — and what their suggestions are for you. The latest edition details what you can do to protect LGBTQ rights in Trump's America. (Mic)

— If Trump follows through on his promise to deport millions of people, the logistics would be extraordinary. Mic breaks down the specifics.

— Trump has only three cabinet-level appointments left to make: Agriculture, Veterans Affairs and Office of Management and Budget. (Politico)

— The Trump transition team now says the questionnaire sent to the Energy department — which asked for the names of staffers involved in fighting climate change — was "not authorized" by the president-elect and will not be pursued. (Washington Post)

— The Wall Street Journal reports an increase in stock prices and possible new projects for overseas companies associated with Trump. "Trump could be largely valuable for people in business with him abroad," the Journal writes.

Stay up-to-date on America's changes under President-elect Donald Trump with this newsletter. Every weekday we'll cover the biggest Trump news and how Americans have supported him, opposed him and more. Subscribe here.