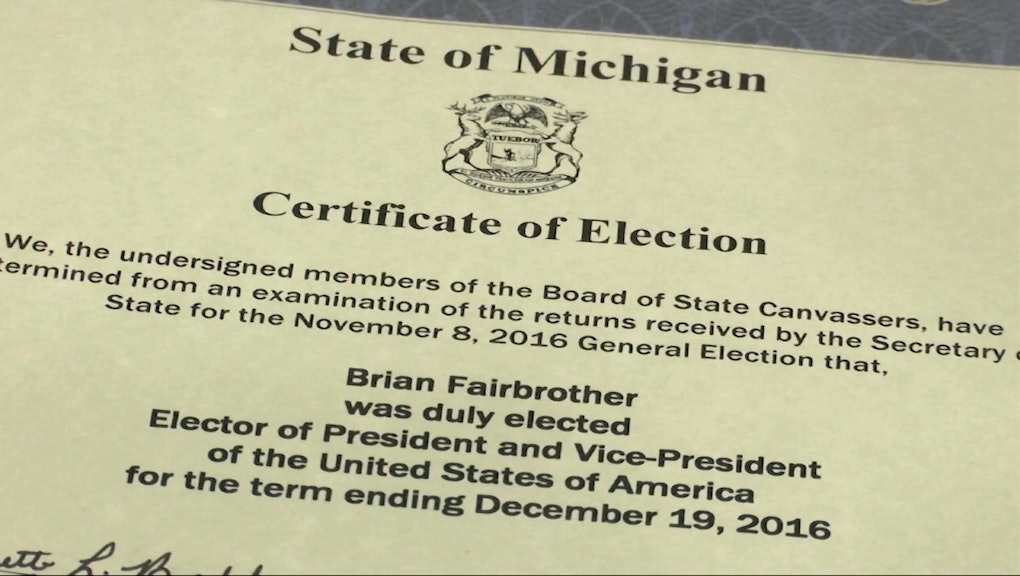 Is there a way to end the Electoral College? Yes, and it's totally legal.

Calls to abolish the Electoral College have grown in recent weeks, after Donald Trump won the presidency despite losing the national popular vote to Hillary Clinton by nearly 3 million votes.

It's called the National Popular Vote Interstate Compact, and it's a state-led effort to ensure that whoever wins the national popular vote in a presidential election will win the White House.

For example, Trump won Michigan by a little more than 10,000 votes, but if the state had signed the compact, its 16 Electoral College votes would go to the winner of the national popular vote: Hillary Clinton.

The compact's supporters point to the fact that, under the Constitution, states are allowed to decide how they wish to dole out their Electoral College votes — including whether they wish to bind all of their electors to the winner of the national popular vote.

Nebraska and Maine, for instance, leveraged their rights to dole out electoral votes by giving them based on which candidate wins each of the state's congressional districts, as well as the statewide vote.

Compact supporters add that, aside from possibly allowing a candidate who did not win the most votes to win the election, the Electoral College also effectively disenfranchises millions of Americans.

"Because of these state winner-take-all statutes, presidential candidates have no reason to pay attention to the issues of concern to voters in states where the statewide outcome is a foregone conclusion," according to the National Popular Vote website, which advocates for the compact and tracks its progress.

The website points to data indicating that a majority of states were ignored by presidential candidates in 2016 because their statewide vote was not as competitive as others. Thus, from the candidates' perspectives, any extensive campaigning in these states could be seen as an inefficient use of time, effort and resources.

Without the compact, the only way to abolish the Electoral College would be through a Constitutional amendment — which would be extremely difficult to pass given the hyper-partisan climate on Capitol Hill.

In order to pass a Constitutional amendment, two-thirds of both the House and Senate would need to vote to change the country's founding document. This has only happened 27 times in U.S. history, the last time being in 1992 when Congress ratified the 27th amendment.

Ten states, as well as the District of Columbia, have signed up for the compact: California, Hawaii, Illinois, Maryland, Massachusetts, New Jersey, New York, Rhode Island, Vermont and Washington are all on-board, according to National Popular Vote.

Along with D.C., these states amount to a collective 165 Electoral College votes.

The compact won't go into effect until enough states have signed on to account for at least 270 Electoral College votes — the number needed to win the presidential election as set by the Constitution.

But a handful of other states have started making moves to sign up.

Still, the compact could have trouble reaching the 270-vote threshold. Republicans currently control a majority of state legislatures, and since their party was the beneficiary of splits between the Electoral College and the popular vote both in 2000 and in 2016, they are less likely to be inclined to make this a priority.

Similarly, swing states that could speed the compact toward 270 votes are unlikely to want to give up the power the Electoral College grants them. Swing states gain economic benefits, with candidates spending millions on holding events and buying advertising — something state legislatures wouldn't be quick to give up.