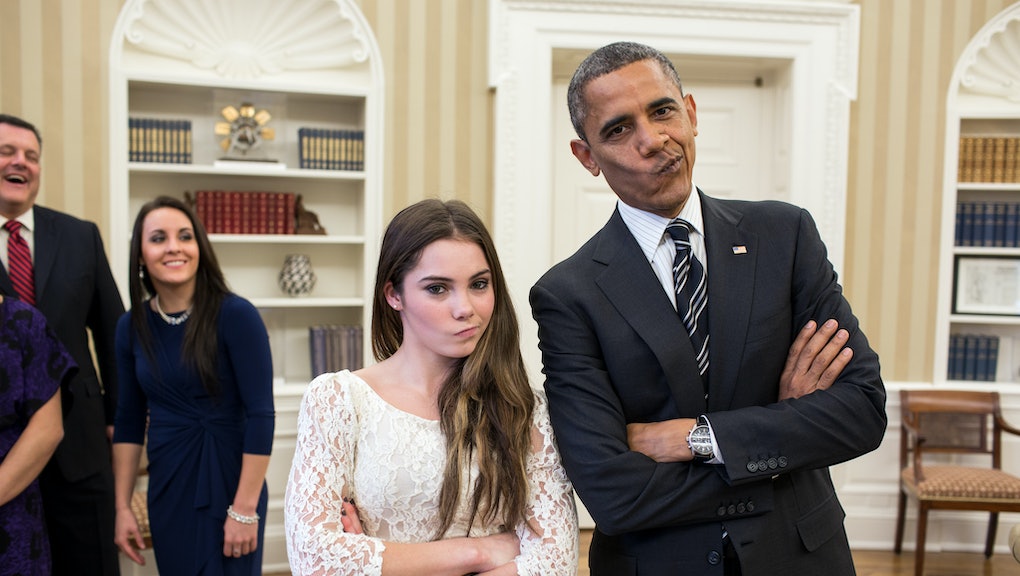 President Barack Obama is a feminist. He's said it more than once — and proudly, at that — but he's also demonstrated as much throughout his eight years in the White House.

Obama's feminism has influenced his policies and has contributed to some of the most crucial progressive gains in U.S. history — not only for women, but also for communities of color, queer people and, yes, for men. Of course, like all feminists, he's not perfect. Not all of his policies on reproductive health have been progressive, and he's said he wasn't always an equal partner at home.

As the nation transitions from the leadership of someone who believes that "when everybody is equal, we are all more free," to that of a man who has publicly referred to women as "piece[s] of ass," Obama's legacy of pursuing gender equality is arguably more important than ever. Even as the country faces a wider wage gap, encroachments on reproductive rights and a return to forced domesticity under the Trump administration, these feminist highlights of the Obama years should stand as a heartening example of what was — and will remain — possible.

One of the first campaign promises Obama tried to make good on when he took office in January 2009 was to end gender-based pay discrimination. He started his presidency by signing the Lilly Ledbetter Fair Pay Act, the first bill he signed into law, which changed the statute of limitations for protesting discriminatory pay.

But Obama didn't stop there: He also established a National Equal Pay Enforcement Task Force and kept bringing up the need for equal pay. During his 2014 State of the Union address, Obama blasted the gender wage gap as archaic, and seven years after signing the Fair Pay Act, he introduced a proposal that would do more to help achieve pay equity — because, as Obama put it, "all of us have to make sure that all of our young girls know we're invested in their success."

Ensuring health care access — and contraceptive coverage — for all Americans

The Affordable Care Act is arguably the most crucial piece of Obama's legacy. Securing universal health care access is a feminist issue all on its own, but Obama's insistence that birth control is a key component of women's health is nothing short of revolutionary.

Assuring access to contraception with the ACA's contraceptive coverage mandate, and then standing in solidarity with other advocates for the measure, is one way Obama has demonstrated he understands what women have long known to be true: The ability to control our reproductive lives is the bedrock of being able to control our destinies.

Valuing Americans' access to affordable contraception is not the only way Obama has worked to secure reproductive justice. He has been an outspoken supporter of Planned Parenthood throughout his two terms, and has gone out of his way to protect the organization in the face of a Donald Trump presidency. When Congress has tried to defund Planned Parenthood and curtail abortion access, Obama has pushed back.

Instead of shaming those who have abortions, Obama has pivoted the conversation to address what can be done to help people avoid unintended pregnancies. The link between reproductive rights and gender equality has not been lost on Obama: As he asserted in a speech commemorating the anniversary of Roe v. Wade, Obama noted it is imperative the United States "continue our efforts to ensure that our daughters have the same rights, freedoms and opportunities as our sons to fulfill their dreams."

Appointing women and minorities in all levels of his administration

Obama gained a good deal of feminist credibility by appointing Supreme Court Justices Sonia Sotomayor and Elena Kagan, which put a record number of women (including the first Latina) on the bench of the nation's highest court. One of his stated goals in doing so was to create "a court that would be more inclusive, more representative, more reflective of us as a people than ever before," which seems to be the ethos of all of his feminist judicial appointments.

Making the government more representative of the country has applied to more than the judicial branch throughout the Obama administration: More than half of Obama's appointees for positions requiring Senate confirmation have been women and minorities, making his administration the most diverse in presidential history.

Acknowledging gender stereotypes (and the need to dismantle them)

Obama has been unrepentant in his calls to dismantle insidious gender norms, like those that "[raise] our girls to be demure and our boys to be assertive, that [criticize] our daughters for speaking out and our sons for shedding a tear."

On his 55th birthday, Glamour published an essay Obama penned that didn't just declare — again — that he's a feminist, but explained why; it outlined point by point what everyone, especially men, should do to promote and achieve gender equality. The points are ones he's mentioned in other contexts: He's said "playing like a girl" means "you're a badass," acknowledged the ridiculous beauty standards women (especially women of color) face and criticized discriminatory policies like the tampon tax.

When, during the 2016 campaign, it was revealed then-candidate Trump had described sexually assaulting women on tape, Obama reacted not as many other men in government did, but as a feminist.

"You don't have to be a husband or a father to hear what we heard a few days ago and say, 'That's not right,'" Obama said. He didn't just condemn Trump's comments, but also framed them as an assault on human dignity.

That follows from Obama's general approach to stopping gender-based violence throughout his presidency. He signed a bill establishing a sexual assault survivors' bill of rights, announced his refusal to visit schools that don't adequately address reports of sexual violence and called out Bill Cosby as a rapist while others continued to defend him. Obama has also expressed that all forms of harassment and discrimination — whether against women or other marginalized groups — make us all less safe.

If that's not what feminism is about, then what is?