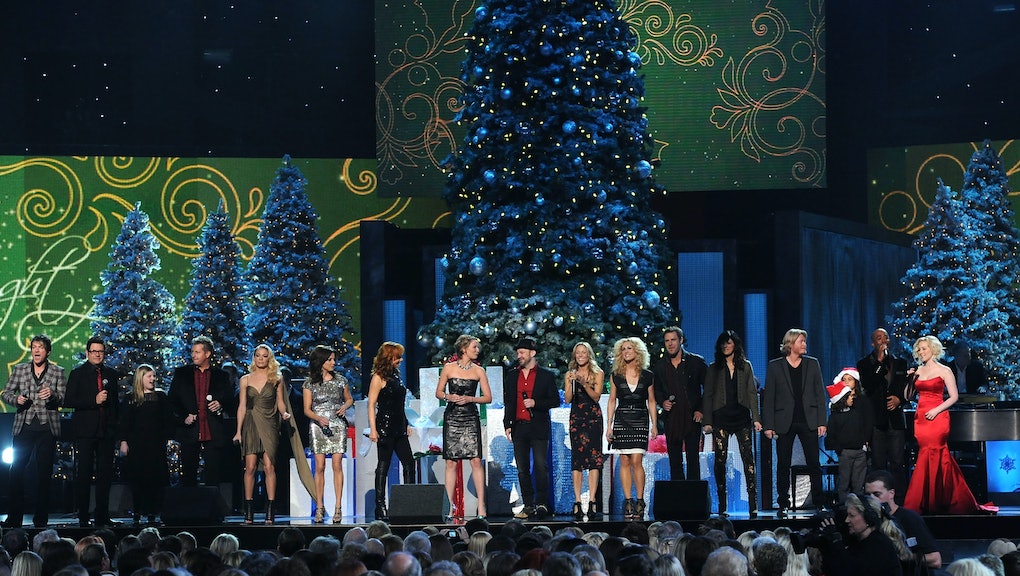 Let's face it, the country genre isn't always the easiest sell. With its niche listenership, country music is either adored or despised with profoundly cheerless conviction.

For 334 days out of the year, a Kenny Chesney tune may spend most of its time on a strictly "private session" rotation but when the first door of the advent calendar is torn from its paper hinges, and bursts with chocolate and glitter emblazoned treasures, it's time for a Christmas playlist, country style.

As we slide out of 2016 with the agility of an Olympic ice luge racer, what better way to keep the mood light after what's been an unseasonably cold, cruel year. You can check out the full country Christmas playlist on Spotify below or read some more about a few of the playlist's country standouts.

Appearing on the trio's 2016 Christmas album, The Greatest Gift of All, Rascal Flatts bring their unmistakable harmonies to this beautifully updated country version of "Deck the Halls."

Most recognized as a 2006 American Idol competitor and country singing hopeful, Pickler didn't quite make the cut in season five. But even after placing sixth in the competition, the country music industry welcomed the North Carolina native with open arms.

"Santa Baby" was originally performed by Eartha Kitt in 1953 and then most notably covered by Madonna in 1987. Though Pickler had some pretty big boots to fill, this rendition gives the song the wholesome, southern charm it needed.

Lady Antebellum, "Baby, It's Cold Outside"

Leave it to Lady Antebellum to make this dated, predatory jingle sound festive and flirty. Since making their country Christmas debut on the Today Show in 2008 with "Baby, It's Cold Outside," the Nashville three-piece are now holiday-ready with two  Christmas albums under their belt. Since skyrocketing to music superstardom, Lady Antebellum's holiday catalog turns both the classic and the downright disturbing holiday tunes into moving ballads that will have listeners sobbing into the nearest Christmas stocking.

Because only Johnny Cash can make a song like, "The Little Drummer Boy" sound considerably ominous. Cash released a version of the song on his 1963 album, The Christmas Spirit and performed the Christmas classic The Johnny Cash Christmas Show in 1970.