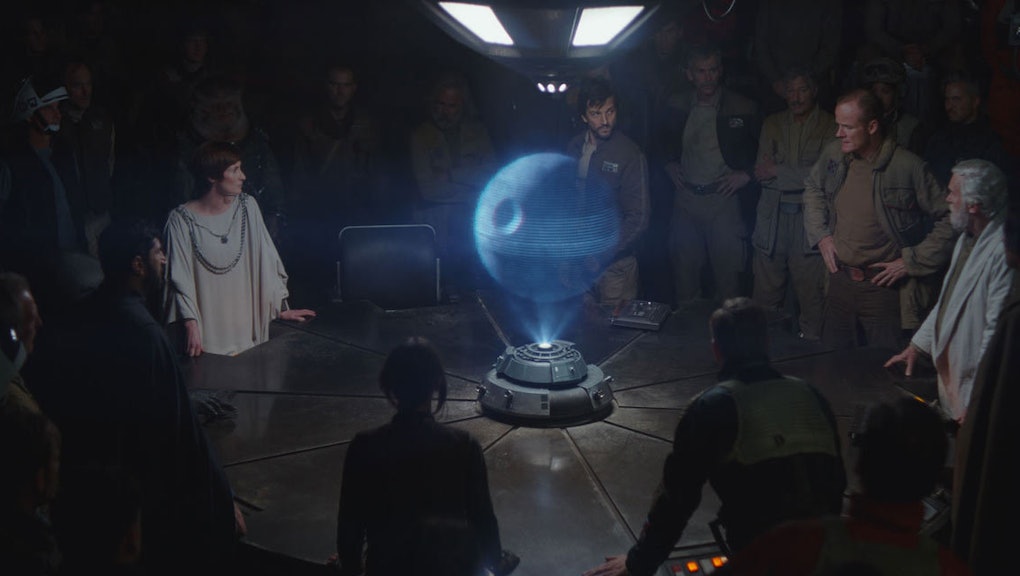 9 ‘Rogue One’ easter eggs with clever callbacks to ‘Star Wars’

The latest entry in the Star Wars franchise, Rogue One, is a great story that stands well on its own — but this is Star Wars, so of course there's plenty of nostalgic throwbacks to earlier films. Rogue One pays tribute to A New Hope — which makes sense, considering the events of Rogue One take place immediately before those of A New Hope — along with other entries, so much so that it's unreasonable to assume anyone can find every single easter egg in one viewing — and certainly not without the help of Reddit users pooling their resources.

To that end, if you wanted to know why objectively random moments of Rogue One were deafened by the nerdy squeals of passionate moviegoers, here's nine easter eggs from the film that probably elicited such a response. Spoilers below for Rogue One, obviously.

Rogue One opens on the Erso family's idyllic, isolated farm life, which is son interrupted by the Empire. Galen Erso was a former Imperial scientist who'd quit, but Orson Krennic shows up to reel him back in (sad!). Before that happens, however, we get to see that the Ersos have one Star Wars family staple in their possession: blue milk.

Yes, the precious blue milk — seriously, why is it blue? — that Luke has on Tatooine makes a delightful cameo here. Does blue milk taste better? We may never know.

As actor Jimmy Smits already revealed, Bail Organa, Princess Leia's adoptive father, makes an appearance in Rogue One. He's one of the few characters who tries to help the Jedi in Revenge of the Sith after the Emperor reveals himself, so it makes sense that he'd be an integral part of the Rebel Alliance, along with Leia.

Sadly, he makes his way to Alderaan in Rogue One, which, as fans know, is destroyed by the Death Star during A New Hope.

The Rebel headquarters on Yavin 4, and their scope person!

We saw a good chunk of the Rebel Alliance's headquarters on the moon of Yavin 4 in A New Hope, but the franchise hasn't returned there since. Well, it's back (and technically, before the events of A New Hope), as Jyn Erso is sent there for exposition purposes. As a fun little touch, we're also treated to a Rebel scanning a spaceship with his pseudo-scope-radar-gun thing; again, a new parallel to A New Hope.

It's not just that Grand Moff Tarkin appears in Rogue One, he's actually in a few key scenes. This wouldn't be particularly mind-blowing, if not for the fact that the character is a shockingly accurate CGI rendering of the late Peter Cushing, who played Tarkin in A New Hope.

Whether Tarkin's, and by extension Cushing's, CGIed presence is unsettling or not is really up to the viewer, but for Vulture's David Edelstein, it was a bit too much: "Cushing remains one of my favorite actors and the excitement of seeing him again onscreen in any form quickly turned to disgust," Edelstein wrote. "Even his Baron Frankenstein would have been horrified by this kind of grave-robbing."

A droid that really enjoys telling people the odds

The newest droid in Star Wars is undoubtedly the most cynical since, maybe, R2-D2? It's hard to tell, because we get R2's sass vicariously as told through C-3PO's responses to its beeps and boops, but Rogue One's K-2SO will at least give R2's sass a run for its money. K-2SO is brutally honest, and, like C-3PO, he really enjoys telling people the odds — especially when they're bad.

Ponda Baba and Cornelius Evazan, aka the guys who picked a fight with Luke at the Mos Eisley Cantina

Yes, those guys at the Mos Eisley Cantina who picked a bad time to scuffle with Luke have names (Cornelius Evazan is apparently a doctor!), and they do make a brief-but-memorable cameo in Rogue One. When Jyn and Cassian make their way to Jedha, Jyn bumps into Evazan at a Jedha marketplace and got the type of response you'd expect. A threat — and a reminder of how dangerous he is — and while Jyn didn't engage him, her other fights in Rogue One would suggest it'd be one-sided.

It's fine, however; they learned their lesson at the Mos Eisley Cantina when Obi-Wan intervened.

A bacta tank for Darth Vader

We've seen Luke use a bacta tank in The Empire Strikes Back to speed up his healing process after almost freezing to death on Hoth, so it actually makes sense that we'd also see Darth Vader in a bacta tank in Rogue One. Luke's injuries on Hoth were bad enough, but Vader's body was left disfigured and charred after Revenge of the Sith, so it makes sense that he'd need some pretty frequent bacta tank soaks to stay in peak condition.

It's basically Vader's version of a healing spa.

The lovable droids are seen together very, very briefly on Yavin 4 when the Rebels send a squadron to help Jyn and the other Rogue One Rebels on Scarif. C-3PO says something sassy, but I can't tell you what exactly because the entire theater erupted with cheers when he did. That'll have to wait for a second viewing — unless fans scream again then, too.

And, of course, Princess Leia and Tantine IV

Apparently the intense battle at Scarif included Tantine IV, the ship that holds the plans to the Death Star at the beginning of A New Hope. It's inclusion at the very end of Rogue One was a nice touch, as we see how it just barely escaped the clutches of Darth Vader, who mercilessly slaughtered a slew of Rebel fighters before the ship got away.

Of course, there's an important character from the original trilogy aboard that ship, and Rogue One viewers are also treated to a final, CGIed shot of Princess Leia (seriously, she looks just like Carrie Fisher in the 1977 film). It's a fitting end to a movie rife with clever nods to the franchise, sliding in nicely just ahead of the events of A New Hope.

Mic has ongoing coverage of both Star Wars and Rogue One. Please follow our main Rogue One and Star Wars hubs.