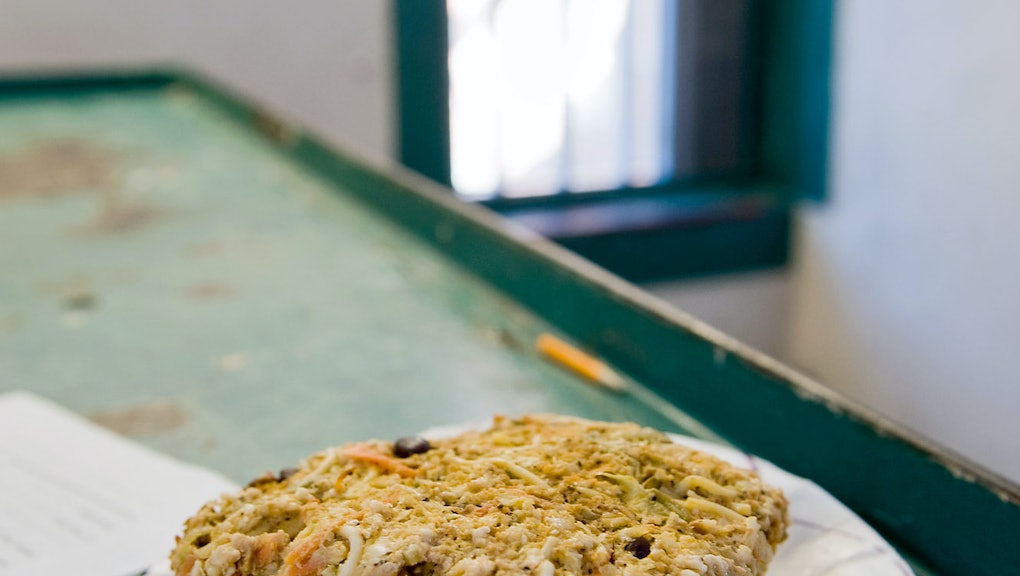 In private prisons, where corporate food contractors are paid to provide nourishment and sufficient calories to prisoners, some are allegedly cutting corners.

Activists will march in Washington, D.C., on Jan. 14 to protest food corporation Aramark, an $8.2 billion company, for allegedly serving subpar food, PBS News Hour reported. Leading the protests will be members of Free Alabama Movement, a group that previously organized a prison labor strike in 2016 to protest the use of free labor in prisons nationwide, a practice they say is akin to slavery. Aramark, their newest target, is a food service provider that serves over 380 million meals in correctional facilities in the U.S. each year.

"[Aramark has] a history of neglecting prisoners, serving bad food, not enough food, or undernourished food ... this is why we have chosen to boycott,"  Free Alabama Movement spokesman Pastor Kenneth Glasgow told PBS News Hour. Free Alabama Movement did not respond to Mic's request for comment.

The crux of the problem is that Aramark and other food contractors have no accountability when it comes to prison food, David Fathi, the director of the American Civil Liberties Union's National Prison Project said in a phone interview on Tuesday night.

"There's no consumer choice ... it's not like if the prisoners don't like Aramark food, they can go somewhere else," Fathi said, explaining that the privatization of prisons means that corporations providing food or telephone service or medical care don't need to fear losing customers if they provide bad service.

"Food is consistently a major source of complaints among prisoners," Fathi said, explaining he wasn't talking about "frivolous complaints." Prisoners say food is "spoiled, there isn't enough of it, it's empty calories and not nutritious," he said.

It's no secret that prison food — in private or public correctional facilities — can be borderline inedible. Albert "Prodigy" Johnson, a hip-hop artist who served time in jail and later wrote a cookbook explaining how to eat healthy in prison, claimed that green beans were the only vegetable he saw when serving time, Mic previously reported.

According to allegations, Aramark's service is mediocre at best and dangerous at worst. On multiple occasions, inmates in Michigan prisons found maggots in food provided by Aramark and in one instance, 30 inmates fell ill from contaminated food, Michigan Radio reported in 2014. Michigan correctional facilities terminated their contract with Aramark in 2015 amid sexual assault allegations and after the state fined Aramark a whopping $98,000 for food shortages and other problems, Detroit Free Press reported. However, a press release from the Michigan Department of Corrections asserted that the incidents were not caused by Aramark.

"Our ability to provide the services requested effectively is evidenced by the fact 97% of our clients retain us," Karen Cutler, vice president of corporate communications for Aramark, said in an email.

Siddique Abdullah Hasan, an inmate on death row at Ohio State Penitentiary in Youngstown, Ohio, told PBS that he has gone on hunger strikes because Aramark serves paltry servings of cold food. Aramark did not meet Ohio's standards for food at seven prisons in Ohio in 2014, the Columbus Dispatch reported. Ohio fined Aramark to the tune of over $272,300 for the various violations.

"In Ohio, after some initial hurdles during start-up, we have delivered tens of millions of dollars in taxpayer savings and our contract was renewed in 2015," Cutler said, explaining that any claims in Michigan and Ohio of maggots were "baseless" and pointing out that a prison director in Ohio publicly took responsibility for some of the maggot problems that stemmed from unclean conditions.

In December, inmates in a Michigan correctional facility staged a protest where they refused to eat lunch or dinner for a week, the Detroit Free Press reported, explaining that incidents of smuggling drugs through food have decreased but not ceased since Trinity, a food service, replaced Aramark.

It's unclear what demands Free Alabama Movement will make when they take Washington on Saturday, but the fact that the group is bringing attention to the issue of prison food isn't to be taken lightly.

"Prisoners are fundamentally disempowered people," Fathi said. "Their ability to improve their conditions is severely limited."