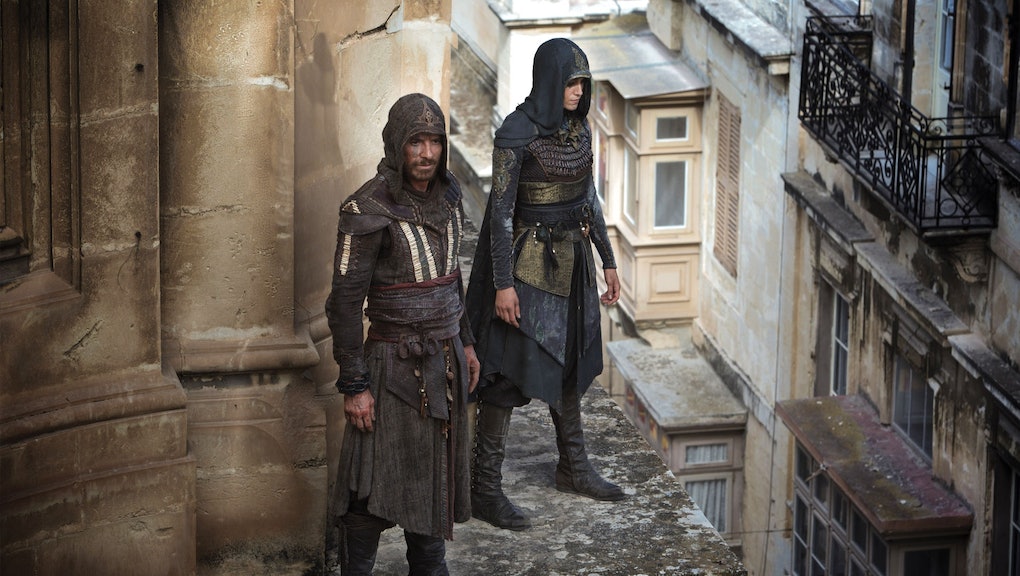 While there may not be a consensus as to why video games adapted into movies are never well-received, it's an industry curse one would assume could be lifted eventually. After all, video games have adapted with stronger narratives, fleshing out stories and numerous cutscenes that are inherently cinematic, even if the storylines themselves are absurd. Perhaps a good video game movie just needed a good premise.

That's why, on the surface, an Assassin's Creed movie is so promising. It's based on a series of video games from Ubisoft that take place in different time periods, ostensibly giving Hollywood several options for setting. Plus, it's about people in the present day tapping into the memories of their ancestors, who are assassins. That's just awesome. Throw in talented, A-list celebrity Michael Fassbender as your assassin protagonist, and yes, Assassin's Creed has the makings of an industry game-changer.

Unfortunately, the Assassin's Creed film is not going to buck the trend. It's a forgettable blockbuster whose biggest problem, amazingly, is that it doesn't have enough fun.

The good: The scenes during the Spanish Inquisition are breathtaking.

Assassin's Creed follows Callum Lynch (Fassbender), a man who's executed in Texas for a murder, but wakes up in the Madrid headquarters of Abstergo, a mysterious "wellness" company that wants to apparently dress all its patients like the people in Apple's 1984 Super Bowl commercial (hmm, that's not ominous). As one of Abstergo's scientists Sophia (Marion Cotillard) explains, Lynch has been saved by Abstergo because they want to access the memories of his ancestor Aguilar, an assassin from 15th century Spain.

Aguilar is the last known person to have had the "Apple of Eden" in his possession, an ancient artifact that — for whoever possesses it — can control free will. Sophia pitches this as a way to "cure violence." Abstergo uses a machine called the Animus for genetic time travel, so Lynch can essentially be thrust into the Spanish Inquisition through the lens of Aguilar.

As a video game concept, it's easy to understand why it's such a hit. You're playing as an assassin, scaling buildings and shifting through crowds to kill unsuspecting victims. Assassin's Creed nails this experience through breathtaking fight scenes with Aguilar and the other assassins.

In one sequence, Aguilar and fellow assassin Maria (played by Ariane Labed) break free of a public execution and frantically escape through the roofs, houses and narrow hallways of the ancient city, creatively killing henchman along the way. The two eventually scale a tall, unfinished building — seemingly trapped. But as any viewers familiar with the video games will know, they set the characters up for a "leap of faith," which is when the assassins in the games can jump off specific buildings and land in a pile of hay, or some other cushioned material — no matter how high — unscathed. It's less realistic to pull off in a movie, and yet Maria jumps off the tall building, followed by Aguilar, who calmly steps off the platform and careens toward the ground.

And then, suddenly, we're back in the present with Lynch.

The bad: Most of the movie takes place in the present day.

That's the problem with Assassin's Creed in a nutshell: Any momentum the film carries with its entertaining set pieces in the past are abruptly halted for scenes in the present day at Abstergo. The film's executive producer Pat Crowley previously told IGN that Assassin's Creed would take place roughly 65% in the present day, and 35% during the Spanish Inquisition. Unfortunately, that's a stretch — at best, a quarter of the movie takes place in the past.

The decision itself is so confounding. The Assassin's Creed video games aren't popular for the present-day drama between Abstergo and the assassins' living ancestors; they work because you're thrust into older time periods with daggers, a hoodie and the ability to scale nearly everything you see.

The blow would be softened, of course, if Assassin's Creed was offering anything of interest at present-day Abstergo. But the film goes lazily through the generic narrative turns you might expect: Lynch doesn't understand he's being duped by the bad guys to find the Apple of Eden; other surviving bloodlines of assassins trapped at Abstergo will try to warn him; Lynch, eventually, is caught up to speed. In a touch of irony, visions of Aguilar follow Lynch throughout the present, explained as an aftereffect of using the Animus and synching up with the previous memories, which doubles down as audience frustration that the film barely features Aguilar at all.

Movie adaptations of video games have failed for several reasons. Tomb Raider couldn't figure out how campy it wanted to be, Warcraft alienated viewers who weren't familiar with the game itself and Super Mario Bros. was an overall train wreck. But Assassin's Creed showed a new way to fail the sub-genre: by depriving the film of its entertaining core.