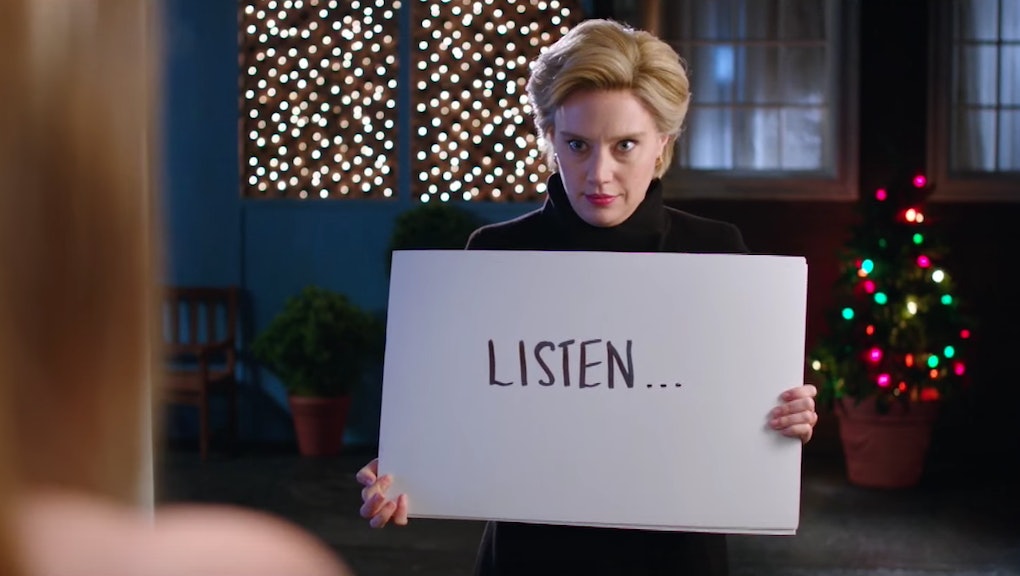 Replicating the iconic scene from the 2003 film in which Mark (Andrew Lincoln) uses caroling as a guise to silently declare his love for his best friend's wife (Keira Knightley), McKinnon's Clinton appeared at an elector's doorstep with a simple holiday plea: don't vote for Donald Trump.

"I know you're an elector, and on Dec. 19, you're supposed to vote for Donald Trump," Clinton's handwritten signs read. "But bish...he cray."

The Electoral College will gather in all 50 states on Monday to choose the next president of the United States, with many seeing this as the last chance for the country to elect a candidate other than Donald Trump. If Trump does not receive the necessary 270 votes, the election will go to the House of Representatives, who will make the final choice.

So why shouldn't the elector (played by Cecily Strong) cast her vote for Trump? Clinton is prepared with a whole list of reasons, from refusing his security briefings and already having provoked the Chinese to reason number 16: "He met with Kanye West this week."

And for those electors worried about the $1,000 fine they may incur in states that have laws against "faithless electors," Clinton has an answer for that too: a big check from the candidate herself.

Of course, the electors don't have to vote for Clinton to challenge the election results — which McKinnon's Clinton acknowledges. "Just vote for LITERALLY anyone else," her sign reads.

Some suggestions? John Kasich, Tom Hanks, Zendaya, the Rock — or just a rock itself. (At least it wouldn't have so many business conflicts.)

Will the Electoral College take the show's Love Actually message to heart on Monday? We'll have to wait and see.

"But keep in mind," Clinton's signs warn, "if Donald Trump becomes president — he will kill us all."