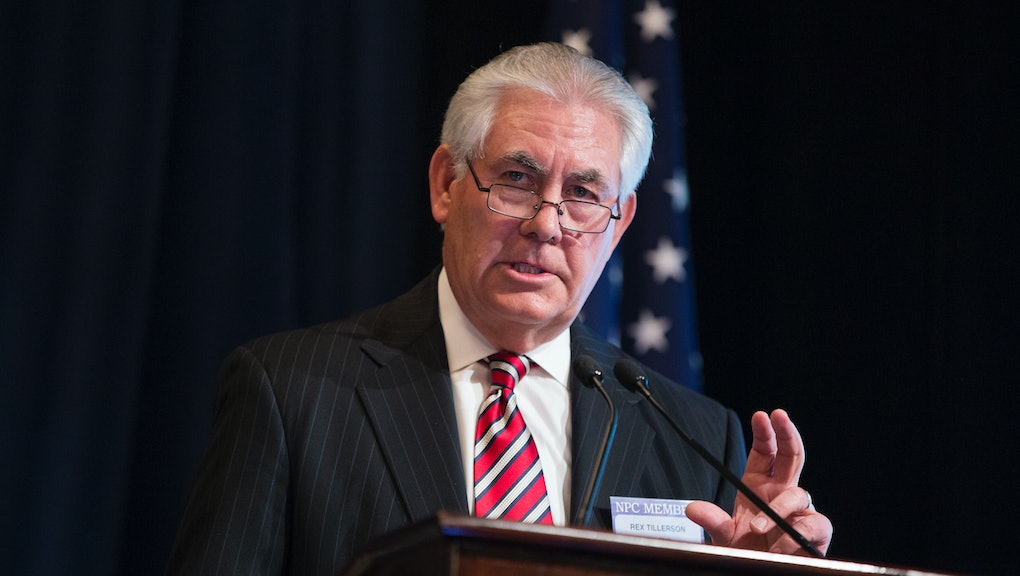 Rex Tillerson is the director of a U.S.-Russian oil company registered in the Bahamas

Rex Tillerson, the ExxonMobil CEO tapped by Republican President-elect Donald Trump to serve as secretary of state in his future administration, is the director of a "U.S.-Russian oil firm based in the tax haven of the Bahamas," the Guardian reported on Sunday.

A leaked document from 2001 showed since at least 1998, Tillerson has been the director of ExxonMobile Russian subsidiary Exxon Neftegas along with "other officers who are based at Houston, Texas; Moscow; and Sakhalin, in Russia's far east," the paper wrote.

While the offshore tax haven is legal, the international dimension of the financial arrangement may raise some eyebrows in light of TIllerson's well-known pro-Russian bent and reports the CIA now believes Russian leader Vladimir Putin personally directed intelligence assets to hack Democratic Party targets in an effort to sway the Nov. 8 presidential election.

In 2003, after ExxonMobil struck a sweetheart deal to drill in Russian Arctic waters under Tillerson's leadership, Putin rewarded Tillerson with the Russian Order of Friendship. The deal was later sabotaged by Western sanctions imposed on Russia when it annexed Ukraine's Crimean peninsula.

As the Bahamas have an effective corporate tax rate of zero percent and the country is a notorious offshore tax haven, the arrangement also seems to fly in the face of the spirit of Trump's protectionist economic agenda, even if it is not illegal. The Guardian noted Exxon Neftegas' most important project, the Sakhalin-1 oil facility, is "10,700km (6,650 miles) away from the subsidiary's official business home in Nassau, the semi-tropical capital of the Bahamas."

ExxonMobil said the arrangement was one of "simplicity and predictability" rather than reducing tax liability.

The documents, which were originally procured by German newspaper Süddeutsche Zeitung, show ExxonMobil registered at least 67 companies in the Bahamas to cover operations all around the world.