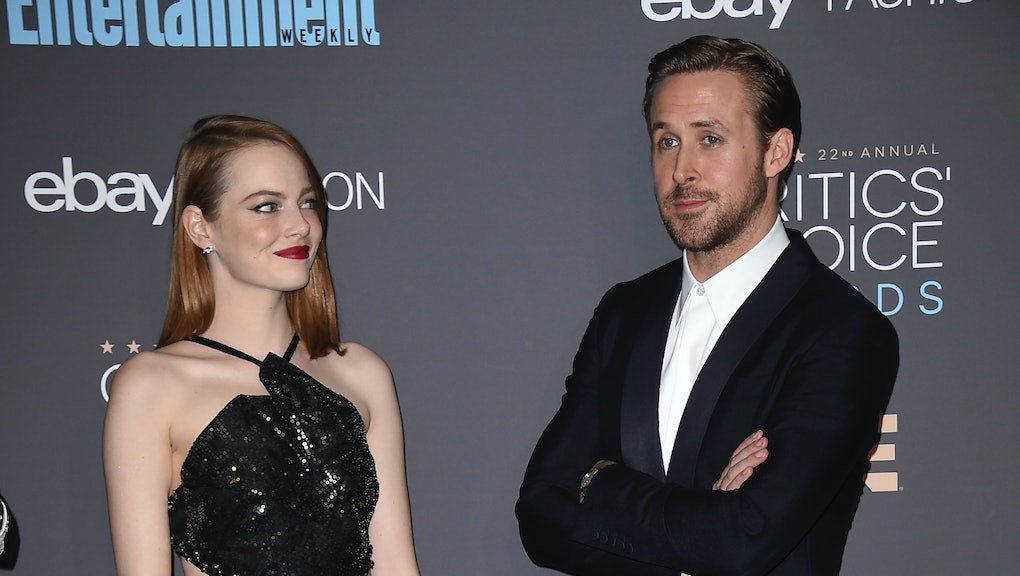 It is nearly impossible to be a frontrunner for the Oscars' best picture prize and not get hit by backlash. The real question is whether a film can survive it. 12 Years a Slave, Argo and The Artist did. Up in the Air and Boyhood did not.

After weeks of smooth sailing on its way to the Academy Awards, La La Land — the Emma Stone and Ryan Gosling movie musical — hit some rocky waters over the weekend. The film's naysayers raised questions about the film's technical aspects, including the stars' dancing and Gosling's singing. (It doesn't help that even the film's staunchest defenders tend to use the film's un-theatrical quality as a selling point.)

This wave of backlash created another flood from defenders, which was then met by yet another set of counterarguments. All of this is to say that while La La Land is nearly as certain a best-picture winner as it was a week before, the movie now faces its first of many challenges.

Here's where the rest of the Oscar race stands as we head into Christmas.

It's not quite prevalent enough to call it a backlash yet, but there's been another argument against La La Land: that it is, to put it bluntly, just the whitest movie.

Though La La Land includes a few actors of color (most significantly, John Legend as a breakthrough jazz artist with whom Gosling's character performs), the story hinges on two pretty white folks talk-singing some quiet tunes about the experience of living and loving in Los Angeles. Considering the academy's existing predilection for stories without people of color, La La Land's seemingly unstoppable march toward best picture feels like more of the same. (Note: Some are also arguing La La Land's "white-people movie" label is reductive.)

It's not unthinkable that with an extra week of voting built into this season, some reflective Oscar voters will consider both the films and the politics of the race. That could tip the scale in Moonlight's favor; after all, Barry Jenkins' brutally beautiful film is likely to be a strong rival to La La Land all season. It's an uphill battle, but every bit of backlash aimed at La La Land only helps Moonlight in the long run.

If there's any film underrated by Oscar pundits, it's Hidden Figures. The Taraji P. Henson space dramedy is the inspirational home run of the season. It's the kind of movie that draws applause and cheers at screenings for members of various voting bodies; in other words, it's the kind of movie you want to root for.

The Oscars' preferential voting system for best picture ensures the movies with the most passionate fans get strong shots at making the Academy's top field. It's how a small foreign film like Amour can nab a best picture nod: Enthusiasm goes a long way and Hidden Figures is going to inspire enthusiasm.

It's not a lock in the same way as, say, La La Land or Manchester by the Sea — those films are made by auteur directors and have enjoyed critical hosannas all year — but it'd be foolish to count Hidden Figures out. We'd be shocked not to see it in the lineup come January.

Blunt feels like a freak accident, but Adams and Streep both earned Globe nominations, too. It's not hard to imagine them joining Stone and Portman, with the final slot a toss-up between Huppert and Bening. It does, however, seem nearly impossible for Negga to get in now.

Of these eight women, the rightful lineup in our eyes is Stone, Portman, Bening, Adams and Negga. If we were betting, though, we'd say Stone, Portman, Adams, Streep and Huppert — with Bening potentially replacing Streep if voters don't respond to Florence Foster Jenkins, currently enjoying a re-release to help boost the film's chances during awards season. Loving could be a surprise hit with the Academy, but Huppert has the buzzier performance.

With eight actresses attracting a similar amount of heat, it's a tough race. At this point, Stone and Portman are the only sure things.