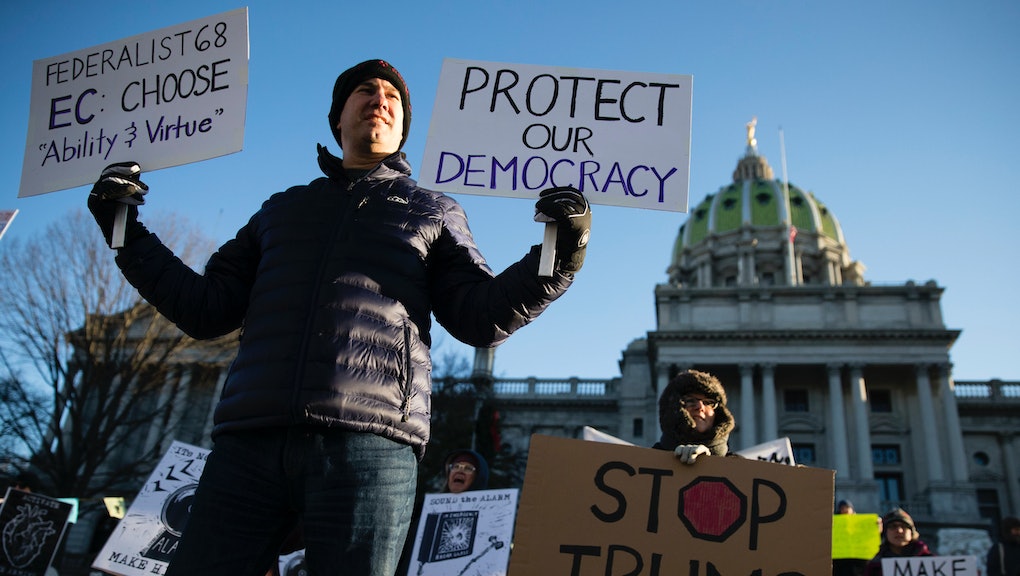 What happens if the Electoral College votes differently from the states?

With electors from the Electoral College set to officially cast their votes for president Monday, people are beginning to wonder: What will happen if they don't vote for President-elect Donald Trump? The idea has ignited the minds of many across the nation, including those who are hoping that so-called "faithless electors" might decide not to select Trump as president.

Trump needs at least 270 electors to pick him for president. If he fails to reach this number, the process for selecting the president gets more complicated — and involves a mechanism that has only been used twice in the history of the United States.

What is a faithless elector?

A faithless elector is a person who has been designated to represent their state in the Electoral College but who decides to cast a ballot against their state's popular vote wishes.

Faithless electors don't cast ballots against their state's results very often. It is a rare occurrence, happening only 157 times in the nation's history; and the last time more than one faithless elector voted in the same election was in 1912, according to FairVote.org.

There have been instances of large numbers of faithless electors opting to vote against their state's wishes, but the examples are from long ago.

In 1872, 63 Democratic Party electors decided they could not vote for Horace Greeley, who had died shortly after the election but before the Electoral College count. The second-highest number of faithless electors in one election happened in 1832, and it was against a vice-presidential candidate, Martin Van Buren.

How many are needed?

Many Hillary Clinton supporters (as well as non-Clinton/non-Trump supporters) hope that enough electors make the decision not to vote for Trump in the Electoral College.

But the task is no easy endeavor: Trump, who has 306 Electoral College votes (if every elector remains faithful), would need to lose 37 electors from across the country in order to not win the presidency outright. Several states also have statutes that penalize those that would act as faithless electors.

What could happen if Trump loses the Electoral College?

If Trump is unable to secure 270 Electoral College votes, the Constitution dictates that issue goes to the House of Representatives. And here's where it gets tricky: the House must select from one of the top three recipients of electors within the Electoral College. Trump and Clinton will be first and second, but depending on how the faithless electors vote, there could be a third option (for example, conservative third party candidate Evan McMullin).

It gets even more complicated: the House doesn't vote on a strict "one representative/one vote" basis. Instead, each state's delegation is given one vote. To decide how the states vote, a majority of that state's delegation must support one candidate or another.

So a state like New Hampshire, which has a split delegation in Congress, could fail to submit a vote for any candidate if both of its Republican and Democratic members of the House of Representatives fail to agree on one.

Whichever candidate comes out with a majority of the states' delegations in Congress wins the presidency. This means, in all likelihood, even if 37 faithless electors somehow decide to defect away from Trump, Congress is aligned in such a way that he'd still likely win the presidency if it reaches the House of Representatives.