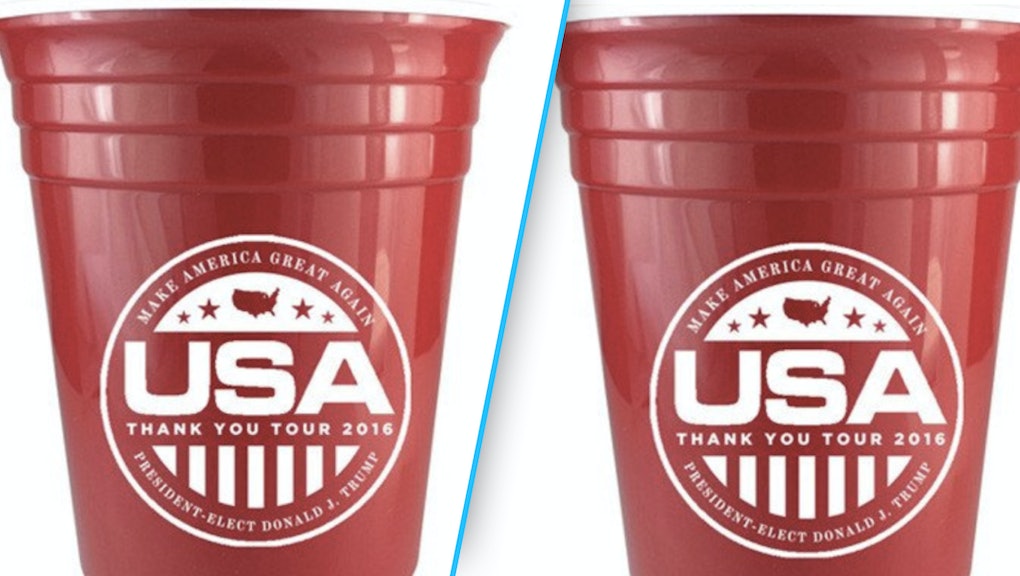 Over on Donald Trump's official merchandise website, the president-elect clearly just wants to give his supporters what they want, whether that be a classic "Make America great again" hat, an official Trump beer koozie or even a fashionable Trump beanie.

And now, for a certain Trump supporter looking for a more eclective and, ahem, 'unpresidented' kind of Trump swag, there's red solo cups being sold by the Trump campaign.

That's right, to commemorate his "Thank You" tour across the country, Trump has started selling a pack of red plastic Trump-branded cups for $23, ready to be filled with 16 ounces of your favorite soda, liquor or beer.

And suddenly, just like that, the carpet of America is soaked with Pabst Blue Ribbon, its wallpaper is caked and sticky with tobacco stains and if you put your ear to the ground, you'll hear the agonizing whines of boys aged 18 to 22 pleading with their father for a larger monthly allowance.

Make no mistake. America is, officially, a crumbling frat house.

But on Shop.DonaldJTrump.com, you get four red party cups for $23. That's just $2 less than the "Make America great again" hat. And it's not like these are ceramic pieces of one-of-a-kind art either. They look like they're made of the same cheap plastic as all those other cups.

There are several questions that arise when looking at a product like this one, but perhaps the most pressing is: What the hell would you drink from a Donald Trump red party cup?

We have a few ideas.

We could down our constitutional rights, crushed to a milky pulp.

We could drink our dreams of social security and retirement, after they've been destroyed and blended into a smoothie.

We could slurp our tears.

Or, if we're still thirsty, we can just drink 16 ounces of straight-up vodka, numbing us as we watch our republic crumble before our very eyes.

But hey, at least the cup is FDA approved and lead free.