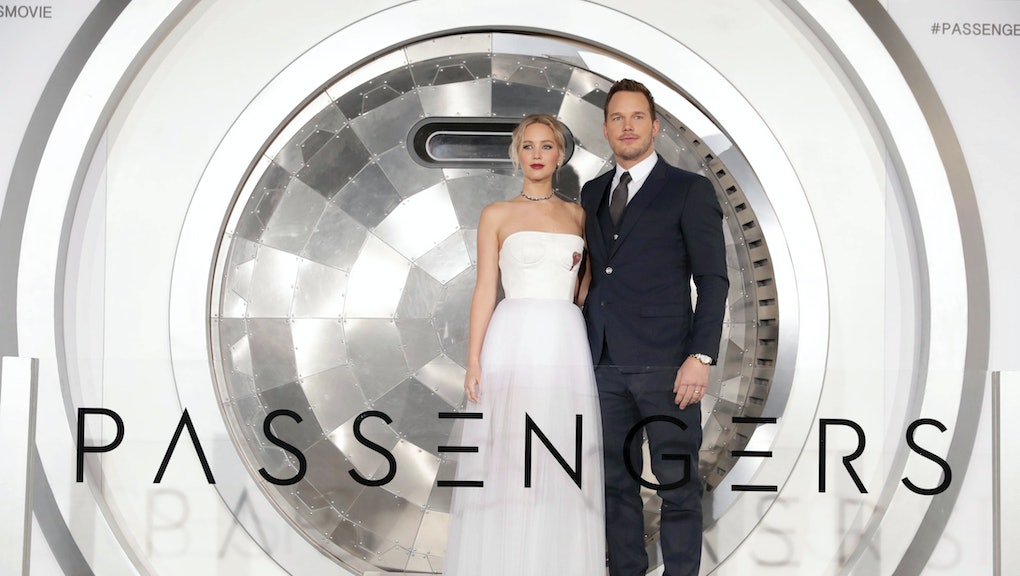 'Passengers' Trailer and Poster: You’re not getting the full story

If you're going by the trailer, TV ads and posters, Chris Pratt and Jennifer Lawrence's Passengers looks like an exhilarating and romantic space romp. The premise is apparently pretty clear: Pratt and Lawrence are an intergalactic Adam and Eve. They were on a ship headed toward a new colony, but they awoke 90 years ahead of their arrival. They'll have to stop some form of imminent space danger and probably fall in love along the way.

At least that's what we can gather from the film's promotional materials.

The only problem? This isn't exactly what happens in the movie. The actual events of the film are more sinister and troubling. The trailers seem to be lying by omission.

The trailer makes it seem like Pratt and Lawrence's characters wake up around the same time under mysterious circumstances. This isn't at all how it happens. According to Entertainment Weekly's review of the film, Pratt's character Jim Preston is the first to wake up when his pod is jostled and opened as the ship passes through a meteor shower. Pratt, through various sequences, tries to solve his situation, which EW writer Chris Nashawaty likens to The Martian and Cast Away (but makes it clear, it's not as good as those.)

So where does Jennifer Lawrence come in? Pratt, faced with being awake and alone, starts to stalk a gorgeous woman (Lawrence) who's still asleep in her pod. He looks up her history on the ship's computers and, according to GeekTyrant, "becomes obsessed." Pratt then decides to wake up Lawrence's character, Aurora, "effectively giving her a death sentence along with him," as Nashawaty put it. He then pretends she woke up accidentally like him.

The trailers and ads for the movie, whether intentionally or not, omit this facet of the story. Instead they hinge on the line "there's a reason we woke up early," which further obfuscates the truth about how Preston is a manipulative stalker and basically kidnaps Aurora for a lifetime. The poster also gives Lawrence and Pratt equal importance and placement, when we know their relationship in the movie is anything but. The SOS in morse code becomes even more fitting with that knowledge, though.

Many have been quick to point out what a problem this is and how it makes Pratt's character immediately unlikable and irredeemable. Rebecca Hawkes wrote about the choice for the Telegraph, saying he "deliberately condemned this woman, a fellow human being, to a horrifyingly lonely existence." Twitter users have also chimed in to call out the movie:

And it doesn't get any better from there. Hawkes explains that Passengers "forgives, softens and ultimately justifies its central act of violence." Nashawaty further dings the movie for under-developing Lawrence's character:

It doesn't help the film's whole female-victimization vibe either that Lawrence is relegated to being a pretty helpless damsel in distress when the Avalon's systems start to fail. She's way too good of an actress to be told to look scared and shout lines like "What does that mean?!" when technical terms are thrown around, and "Jim, how do we fix this?!" while Pratt tries to win her back with his can-do heroism. She's stuck in what essentially amounts to a risable two-hour exhibit of sci-fi Stockholm Syndrome.

How this revelation and other negative reviews (Passengers currently has a 33% rating on Rotten Tomatoes) will affect its box office totals is yet to be seen. According to the Wrap, as of Dec. 1 it was predicted to make $39 million over its first five days. We'll see when the film is released nationwide Wednesday, Dec. 21, if the hidden creep factor keeps people away.