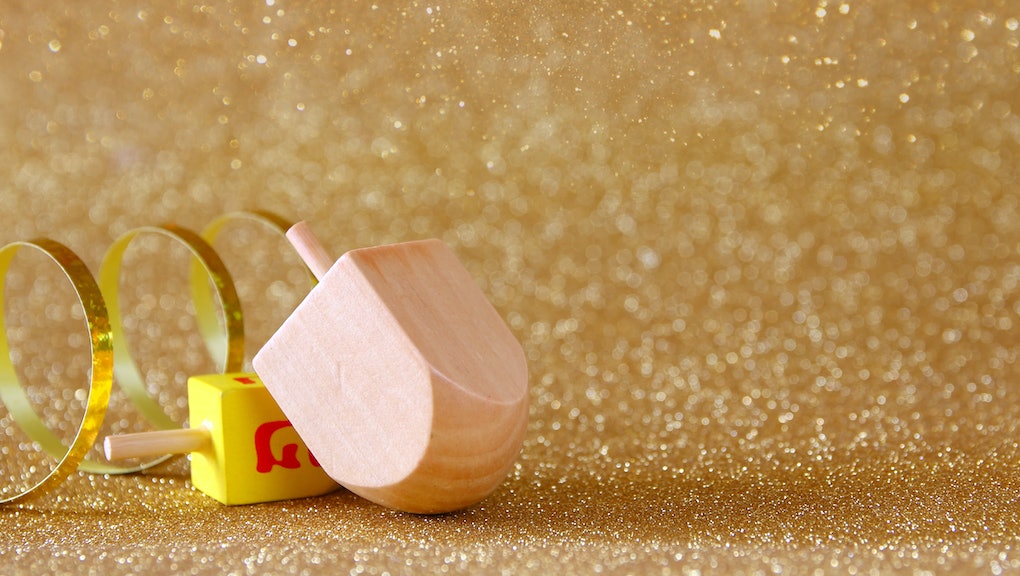 Hanukkah, the Jewish holiday also known as the Festival of Lights, begins Dec. 24 this year and lasts until Jan. 1. The holiday is well-known for its food and its traditions, specifically the game involving a four-sided top called a dreidel. If you don't already know how to play, consider us your teachers, and soon, you'll be spinning with the best of them.

The meaning behind the dreidel

Though there are many explanations for why the dreidel has become one of the most well-known customs associated with Hanukkah and Judaism in general, it actually had nothing to do with the holiday until recently and was originally called a "totum" when the English and Irish played with it at Christmastime.

The rules of dreidel

Essentially, the traditional dreidel game is just a game of chance, but it can be fun, especially when played among a close group of family members or friends. You can play the game as long as you have at least two people, but the more there are, the more fun it often is. Here are the rules, according to Chabad.org:

1. Everyone playing receives their ante or tokens of some kind that they can place in the betting pool. These tokens can be pennies, chocolate coins, nuts, raisins, etc. Some people play with matchsticks, and we guess you could play with just about anything you want, depending on how crazy you want to get.

2. Everyone spins to see who goes first with the highest spin winning. The hierarchy of spins goes in the order listed above: nun, gimel, hey, shin.

3. Once it is decided who will go first, everyone puts one token in the pot in the middle. Then, the first individual spins the dreidel.

Nun = Nothing happens. The next person must spin.

Gimel = The person gets the whole pot! Afterward, everyone must add one token back to the pot.

Hey = The person gets half the pot.

Shin = The person has to add one token to the pot. Bummer!

5. The game continues with each person trying their luck. If a person runs out of tokens, they are either out or they can ask someone else to loan them a game piece.

6. Play until one person gets all the tokens — or it just feels like time to stop.

Hanukkah's connection with the dreidel

According to Aish.com, some of the links between Hanukkah's traditions and customs are easy to pin down — like the fact that one eats fried latkes and doughnuts, which harkens back to the miracle of the one-day supply of oil that lasted for eight nights. However, because the dreidel does not have an exact history with Hanukkah and the holiday itself like some of the other customs do, its significance must be understood through symbolism.

Some believe the dreidel's history with Jewish culture goes back to the ancient Greeks. The story states that, while the Greeks had outlawed the studying of the Torah, faithful Jews would hide their activities from the Greeks by appearing to be playing with a spinning top instead. According to Haaretz, though, "Not everyone believes that nifty tale."

Instead, Aish offers up another lesson one can gain from playing with the dreidel on Hanukkah:

"While the dreidel spins, the letters disappear in a blur and are visible only when coming to a stop. The dreidel represents how we — immersed in the dizzying hustle bustle of daily routine — cannot see the miracles regularly happening all around. Only when we stop to reflect are our eyes opened to the miracles that were there the whole time."

This article was originally published on Dec. 20, 2016