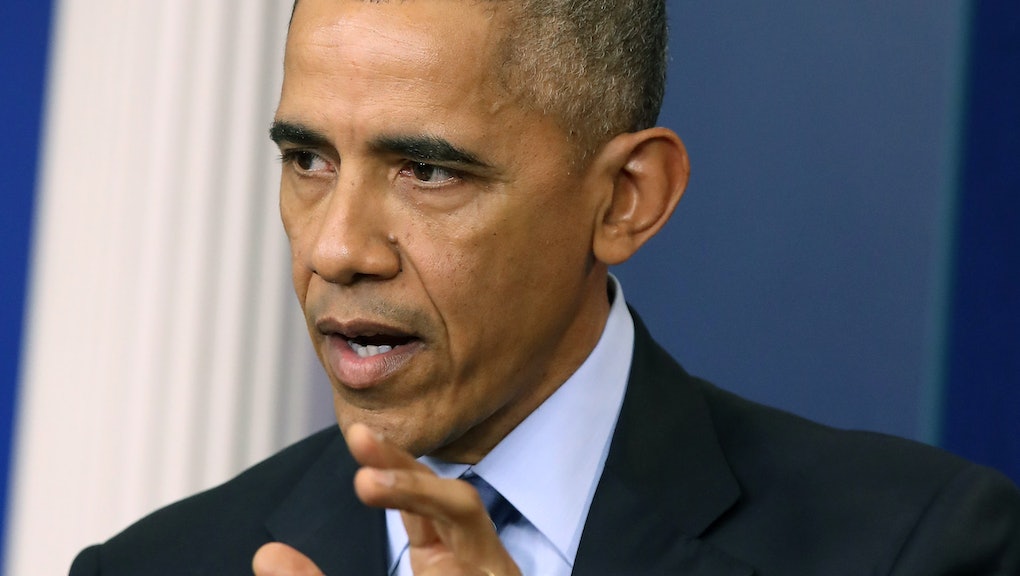 When I learned that Netflix had an Obama biopic slated for this month, I was not expecting it to be about the president's struggle with his biracial identity. But upon watching Barry, which premiered Friday, Dec. 16, I was pleased to see that the issue was the central focus of the movie, which follows our president's year as a junior transfer student at Columbia University in New York. Overall, it's an engaging movie — although a tad heavy-handed with its symbolism at times — that explores the making of such an incredible man. Obama knows how to transcend racial, national and class boundaries because, as Barry demonstrates, he has spent his entire life doing so.

As a biracial person (though not of the same "mix" Obama is), I have always been frustrated by how little Obama's biracial identity gets discussed. I understand the historical and political significance of labeling him a black president, yet doing so doesn't tell the full story. Obama is black, but he also is white. He is not "more black" or "more white." He is both, all at once, always.

Barry shows how this layered identity comes with its blessings and curses. Our protagonist (Devon Terrell) fields invitations to white parties and black parties, but as he says in both cases, neither is his "scene." He can only feel accepted to a point. Whether he eats lunch with white kids at an Ivy League university or plays basketball with black kids in a public park, he never experiences a total sense of belonging. He belongs just enough — enough not to get kicked out, but not enough to escape a creeping unease. Barry feels equally as awkward when he visits a black public housing project as he does when he has dinner with his white girlfriend's parents. For many biracial people, but perhaps especially for the sensitive poet type like our young Barry, social anxiety is a constant condition.

Another aspect of the biracial struggle that Barry captures is the burden of responsibility. As the token student of color in most of his classes, Barry can either speak up on matters of race or keep quiet and cope with the guilt. Of course, white classmates don't always appreciate his candor. When he mentions slavery in America to argue a point in philosophy class, a white male classmate becomes hostile. Yet Barry risks those moments because he knows that speaking up is important, even if (and I say this from personal experience) we biracial people do not always have the emotional energy to do it.

Additionally, Barry shows how difficult it is to get white friends to understand the biracial struggle. When Barry tells Will that he is the only black person in four out of five of his classes, his friend responds that Barry also is white, which means that he can fit in anywhere. He is completely blind to the problem that there's not enough diversity in Barry's classes and the fact that Barry's feeling of alienation is justified.

This last point may be most enlightening for viewers who wonder why a movie about Obama's biracial identity is even worth making, let alone watching. The plight of the tragic mulatto is not a new trope in film and literature, but it's one that people of privilege may find antiquated. Why should a mixed race person feel out of place, let alone inferior, if those of all races are considered equal in the eyes of modern law? However well-intentioned, it's a naive question.

Anyone who believes that we live in a "post-racial" America fails to see the difference between the letter of the law and the spirt of the law, or forgets that there is much the law does not touch at all. Look at the high rate of black and brown people who are incarcerated in American prisons. Look at how police and TSA officers target people with particular skin colors and hair textures. Look at the discrepancies among white students and students of color that exist every step of the way, from kindergarten to the university level. When you're a biracial person, it's often easier to see these disparities because you live two perspectives. And, particularly if you are half-white, you embody both the oppressor and the oppressed. That may not be where your heart belongs, but it's who you are nonetheless.

At a time when so many people fear the Donald Trump administration, I think scores of Americans will come to appreciate Obama and his leadership more than they did even during his presidency. Part of that legacy, as apparent in Barry, will be his ability to grasp nuance.