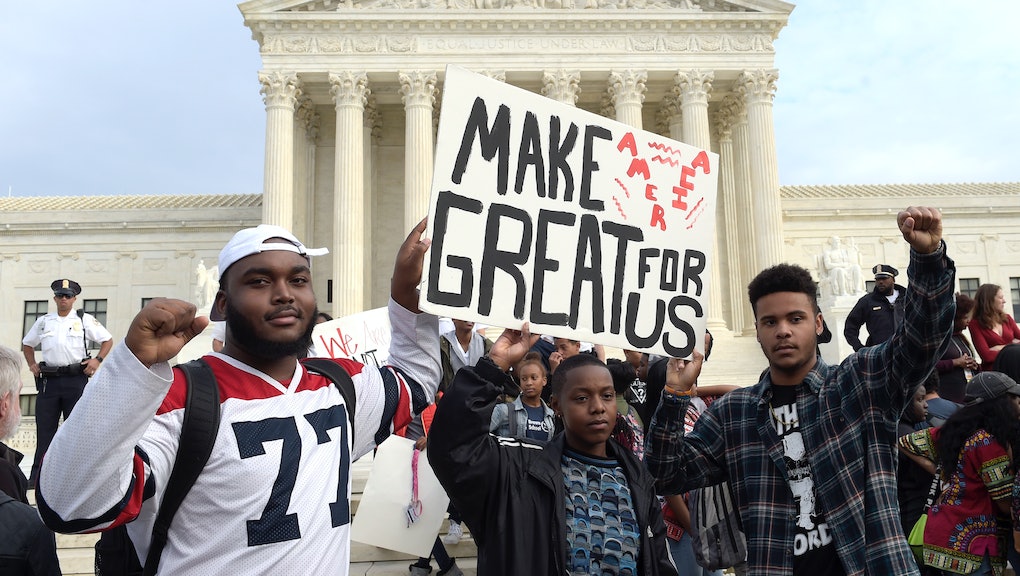 Here are the protests planned for Inauguration Day — permitted or not

Donald Trump's big day is coming up, and his opposition is getting ready.

As countless thousands prepare to travel to Washington, D.C., to attend the Jan. 20 inauguration in support of Trump, activist groups from across the country are filing the necessary paperwork so that they can start planning their own visits, to occupy and protest.

They're going to have to wait. The National Park Service, which is handling many of the protest permits for Inauguration Day, is still holding out on protestors as the Presidential Inauguration Committee solidifies its plans. And while the NPS waits to hand out the necessary permits, some protestors plan on going forward with their actions, with or without a permit.

Around a dozen protest groups are looking for a plot of land to call their own on the big day. DisruptJ20 wants Lafayette Park — as does anti-war group ANSWER. Real Progressives wants Meridian Hill Park, and People's Action wants the Washington Monument Grounds. D.C. Action Lab, the Progressive Independent Party and a host of individuals also applied for permitted protest spaces.

"For large events, sometimes permits aren't issued until a day of or two before the event starts, because there's so much detail being worked out," Litterst told Mic. "How tall are the speakers' stands, what is your medical plan — until we have all that information, we can't issue a permit."

There are only two major groups that have gotten the go-ahead for their demonstrations, according to Litterst. The first is the Women's March on Washington, which is actually happening the day after the inauguration. The NPS told Mic that the group got its permit by negotiating directly with the Metropolitan Police Department.

The second is Bikers for Trump, a volunteer security detail that joined Trump on his campaign stops in order to push back against anti-Trump protestors. They were the first group to secure approval — and are also petitioning to ride along in the inaugural parade.

You don't need a permit

Permits are typically handed out so that large groups of demonstrators can take up public space without the police interfering. But breaking the law is the essential ingredient of the "disobedience" part of civil disobedience, and some groups are preparing to protest without permits.

One of those organizations is DisruptJ20, an coalition of local D.C. organizers who are planning a series of protests and events in the days leading up to Inauguration Day. The group is preparing an itinerary for the protests, welcoming guides and materials for visitors to the capital and communal sleeping spaces for people traveling to protest, Lacy MacAuley, a representative for DisruptJ20, told Mic.

DisruptJ20 is only looking for permits for a portion of its protest — just for those worried about arrest. For its bolder protestors, the coalition will have individuals walking the parade grounds and mingling among the procession audience, ready to sporadically demonstrate when the timing is right.

"It's not permitted, but it's our absolute, inalienable right to voice our opposition to our incoming president, his administration and all that it stands for," MacAuley said.

Protesting itself isn't illegal, but there are a number of laws you can break in the process of protesting, leading to your arrest. Blocking the flow of pedestrians in public spaces and crossing barriers set up by police could lead to arrest. And, of course, if you're on private property at any point against the will of the owner, you can be arrested for trespassing.

Recent protests like the Standing Rock resistance and the initial anti-Trump protests have all been marked by dozens of arrests.

In these cases, groups like the American Civil Liberties Union are clear in their recommendations: Be polite and peaceful, do not resist arrest but remember you have rights.

"Don't give any explanations or excuses," the ACLU advises. "Don't say anything, sign anything or make any decisions without a lawyer. You have the right to make a local phone call, and if you're calling your lawyer, police are not allowed to listen."