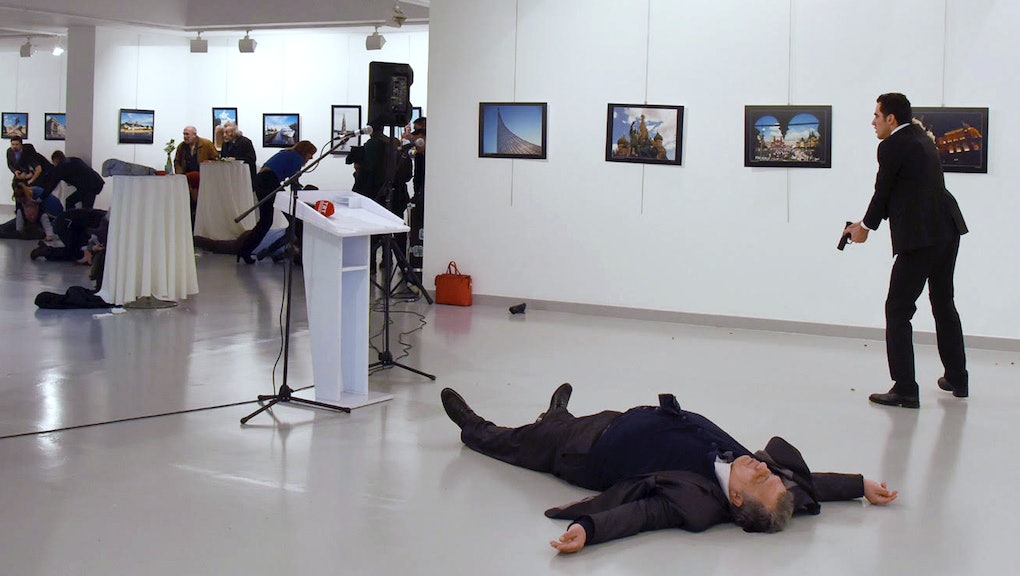 Monday's assassination of Andrei Karlov, the Russian ambassador to Turkey, drew comparisons on social media to the assassination of Austrian Archduke Franz Ferdinand, whose killing in 1914 precipitated World War I.

While some analysts don't seem to think that comparison is apt, it isn't clear yet what the murder — committed by 22-year-old Turkish policeman Mevlut Mert Altintas — will mean for the international community, or for the already-complex Turkish-Russian relations that continue to influence the Syrian civil war.

The governments of Russia and Turkey had once been at odds over the Syrian conflict. Russia backed Syrian President Bashar Assad, while Turkish President Recep Tayyip Erdogan had been among the first to call for Assad's ouster.

Putin and Erdogan respond to assassination

But relations between the two governments have improved in recent months as they worked to prevent Kurdish groups from gaining territory on the Syrian border. The relationship between Turkey's government and Kurds in that country have long been combative; Erdogan has cracked down on Kurdish nationalism since a failed coup against him this summer.

Karlov's assassination came a day after protests in Turkey over Russian backing of Assad, according to the BBC.

Russia and Turkey mourned Karlov's death, the New York Times reported, and Turkey will rename the street in front of the Russian Embassy there in honor of Karlov.

The White House released a statement Monday from Ned Price, the director of the National Security Council, condemning the killing and pledging support for Russia and Turkey.

"This heinous attack on a member of the diplomatic corps is unacceptable, and we stand united with Russia and Turkey in our determination to confront terrorism in all of its forms," Price said in the statement.

"Today we offer our condolences to the family and loved ones of Russian Ambassador to Turkey Andrei Karlov, who was assassinated by a radical Islamic terrorist," Trump's statement read. "The murder of an ambassador is a violation of all rules of civilized order and must be universally condemned."

On Twitter, Trump also linked the assassination to a shooting at a mosque in Zurich and an attack on a Christmas market in Berlin, all of which occurred on Monday.

Samantha Power, the United States ambassador to the United Nations, tweeted that the assassination was a "savage attack."

Erdogan had blamed the failed coup in July on U.S.-based cleric Fethullah Gulen, who has lived in Pennsylvania since his self-imposed exile from Turkey in 1999. Gulen and Erdogan had been allies until the Islamic cleric was accused of attempting to subvert Erdogan's government.

"This man is the leader of a terrorist organization that has bombed my parliament," Erdogan said on 60 Minutes in November. "We have extradited terrorists to the United States in the past, and we expect the same thing to be done by the United States."

The United States reportedly has not extradited Gulen due to a lack of evidence.

Aaron Stein, a resident senior fellow at the Atlantic Council's Rafik Hariri Center for the Middle East, told the New York Times that while budding Turkey and Russian relations will likely survive the assassination, it may — strangely — increase tensions between Turkey and the United States as Erdogan may blame Gulen for Karlov's murder.

"The biggest loser from this will be Washington," Stein told the Times. "It's completely counterintuitive, but it's Washington."

Some in Russia are also pointing their finger at the West.

The Independent reported that Vladimir Zhirinovsky, a Putin ally and right-wing Russian MP, called the assassination a "false flag operation by the West."

Frantz Klintsevich, deputy chairman of the upper chamber of the Russian Parliament's defense and security committee, echoed Zhirinovsky, saying it was "highly likely" that NATO forces were behind the killing, according to the Independent.

"[Russia will] aim our weapons, including the nuclear ones" at countries aligned with the West, Klintsevich said, according to the Independent.

The Obama administration has been at odds with Putin over Russia's intervention in Syria in support of Assad's government. The administration has also come under criticism in the United States for failing to respond adequately to the crisis there.