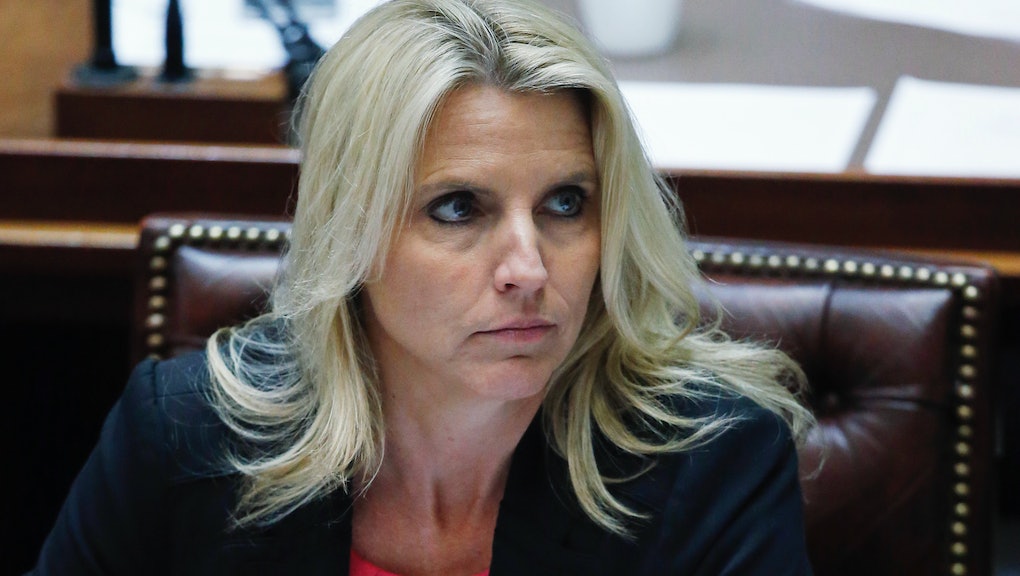 An Oklahoma state senator behind a bill that would have required "anti-abortion signs" to be displayed in public bathrooms has walked back the plan, the Associated Press reported on Friday. Instead, she proposed an amendment that would require the signs at abortion providers along with a social media campaign "on how to avoid abortions."

The original bill, sponsored by Republican state Senator A.J. Griffin, would have required signs in "public bathrooms at hospitals, nursing homes, restaurants and public schools" in the state, according to the AP, with the goal of "achieving an abortion-free society."

As Mic previously reported, the planned signs would bear language discouraging people from seeking out legal abortions, and would read:

There are many public and private agencies willing and able to help you carry your child to term and assist you and your child after your child is born, whether you choose to keep your child or to place him or her for adoption. The State of Oklahoma strongly urges you to contact them if you are pregnant.

The planned implementation of the signs across the state drew pushback not just from abortion-access advocates, who called the measures "insulting," but from representatives for the local businesses that would have shouldered some of the costs of the signs.

"We don't have any concern about the information they're trying to get out to women about their babies and their pregnancy." Jim Hooper, president of the Oklahoma Restaurant Association, told the AP. "This is just the wrong way to do it."

Now Griffin is walking back some of the provisions of her original bill — but not, it seems, the sentiment behind it.

"It was never intended to be a burden on businesses or health providers," Griffin said in a statement, according to the AP. "Changing to a social media campaign will actually broaden the reach and make linking pregnant women to services even more visible."